‘We Are On Our Side’: Across Asia, a Mixed Reaction to Ukraine War

SINGAPORE — Much of the world has united against Russia in the aftermath of its incursion into Ukraine. Envoys have walked out of meetings rather than listen to a top Russian diplomat speak. Western nations have been in near lock step on international sanctions. Bartenders are banning Russian vodka.

In Asia, the reaction has been far more mixed.

Generals in Myanmar have called Russia’s actions “the right thing to do.” India abstained from a U.N. Security Council resolution to condemn the attack. China has refused to call the assault on Ukraine an invasion. And in Vietnam, President Vladimir Putin of Russia is being affectionately referred to as “Uncle Putin.”

While most U.S. allies in the region have fallen in line, authoritarian governments and those with weaker ties to the West have been more reluctant to act on the conflict in Ukraine. Across the Asia-Pacific, only Japan, Singapore, South Korea and Australia have agreed to international sanctions against Moscow. Taiwan, the self-governed territory that China claims as its own, has also agreed to sanctions and voiced support for Ukraine.

The uneven response is unlikely to counterbalance the onslaught of Western anger, but it could test the limits of President Joe Biden’s pledge to make Putin a “pariah on the international stage.”

Russia’s influence in Asia is minimal compared with that of the United States, although it has grown in recent years, with a particular focus on arms sales. Already, the economic ministry in Moscow announced Friday that it would seek to expand economic and trade ties with Asia to help offset Western sanctions.

“I don’t think we will shun Russia,” said Bilahari Kausikan, Singapore’s former ambassador to Russia. “It is still a big country and is a nuclear weapons state.”

It is also a permanent member of the Security Council, a status that is unlikely to change, Kausikan said.

Russia has sold fighter jets to Indonesia, Malaysia and Myanmar, but its biggest customer in Southeast Asia is Vietnam. From 2000 to 2019, 84% of Vietnam’s weapons imports came from Russia, according to the Stockholm International Peace Research Institute.

In its bid to counter China, Vietnam has bought billions of dollars worth of Russian artillery, aircraft and submarines, transforming its military into one of Southeast Asia’s most capable fighting forces while making itself dependent on Moscow for years to come.

In India, Moscow has been seen as a reliable military partner for decades. New Delhi is the world’s second-largest importer of Russian arms, which account for about half of its military supplies. When Putin visited New Delhi late last year, Russia detailed the sale of a $5.4 billion missile defense system to the country.

India has been careful not to condemn Russia over Ukraine and upset a time-tested friendship at a moment when China is threatening to encroach on its northeastern border. Moscow repeatedly used its veto power at the Security Council to block resolutions critical of India over Kashmir, a disputed territory India shares with Pakistan. In return, India abstained from a U.N. resolution condemning Moscow over its annexation of Crimea in 2014.

Indian officials said last week that they may even help Russia find workarounds for the new sanctions by setting up rupee accounts to continue trade with Moscow, similar to what it did after the annexation of Crimea.

“Whose side is India on?” said Pankaj Saran, India’s former ambassador to Russia. “We are on our side. The cyclical bursts of Cold War antagonism are tiresome.”

Indonesia, like India, has significantly increased its economic and defense ties with Russia over the years. Bilateral trade between the two countries rose to $2.74 billion in 2021, a 42.2% increase from the year before. Palm oil makes up about 38% of Indonesia’s exports to Russia.

In December, Jakarta hosted the first-ever joint maritime exercise between Russia and the Association of Southeast Asian Nations, or ASEAN.

“Indonesia does not see Russia as a threat to global politics or as a foe,” said Dinna Prapto Raharja, an associate professor in international relations at Bina Nusantara University in Jakarta. “Unilateral sanctions limit the chance for negotiation and heightens the sense of insecurity to the affected countries.”

On Feb. 24, Teuku Faizasyah, a spokesperson for Indonesia’s Foreign Ministry, suggested that the country had no intention of imposing sanctions against Moscow, arguing it would “not blindly follow the steps taken by another country.”

Where the United States has been quick to criticize Russia for its policies, Putin’s brand of authoritarian politics has appealed to many countries across Asia, and especially in Southeast Asia, where strongman rule is often favored.

In a 2017 Pew Research Center global survey, more than half of those polled in the Philippines and Vietnam said they trusted Putin. At the height of the pandemic, Moscow donated COVID-19 vaccines to the Philippines, Vietnam and Laos.

“I am a big fan of Uncle Putin because he always takes drastic actions,” said Tran Trung Hieu, 28, an independent filmmaker in Hanoi, using the same term of respect that locals use for Ho Chi Minh, the revolutionary who led the independence movement in Vietnam.

President Rodrigo Duterte of the Philippines has called Putin his “favorite hero.” The Philippines on Monday said it condemned the invasion in Ukraine but did not name Russia. Last week, Vietnam refrained from singling Russia out as an aggressor and instead called on “all relevant parties to exercise restraint.”

Two editors for a Vietnamese online magazine and Vietnam National Television said they were told to censor themselves in their reports on the war, including reducing the extent and frequency of coverage, and banning the word “invasion.” Both asked to remain anonymous for fear of government reprisals.

But no country in Southeast Asia has been more supportive of Russia since the invasion than Myanmar, where the military seized power in a coup 13 months ago. Senior military officers from both nations, including Senior Gen. Min Aung Hlaing, the head of Myanmar’s regime, exchanged visits several times last year.

Last week, Maj. Gen Zaw Min Tun, the spokesperson for the junta, told The New York Times that Moscow had “done its part to maintain its sovereignty,” and that the attack was “the right thing to do.” Russia has continued to sell arms to Myanmar after the coup, despite warnings as a humanitarian crisis unfolds.

On Monday, President Volodymyr Zelenskyy of Ukraine called for an international tribunal to investigate Russia for war crimes, but governments in Asia have long understood that being vocal about human rights abuses risks inviting unwanted scrutiny on repressive policies at home.

Thailand, a treaty ally of the United States, has said little about the war except that it supported “ongoing efforts to find a peaceful settlement.” Thitinan Pongsudhirak, director of the Institute of Security and International Studies at Bangkok’s Chulalongkorn University, called that stance “sitting on the fence and not wanting to get down from the fence at all.”

“When Thailand engages abroad, it is concerned, it is fearful that there will be questions about domestic issues in Thailand,” Pongsudhirak said. The country quelled recent nationwide protests by arresting dozens of young people.

Even among the stalwart U.S. allies in Asia, the decision to punish Russia has included some hesitation.

South Korea, after a delay, said it would implement sanctions imposed by the United States and Europe but would not enact its own penalties. Officials said the country needed “to keep in mind that our trade relations with Russia are growing.” By contrast, Japan Prime Minister Fumio Kishida was quick to condemn Russian aggression and announce sanctions.

In an interview, Kateryna Zelenko, Ukraine’s ambassador to Singapore, said a refusal to stop Russia would ultimately compromise global security.

“It must be clear that keeping silent and standing neutral” is a form of consent, Zelenko said.

She added: “We really hope that everyone soon understands that in this terrible war, nobody will be able to sit out.” 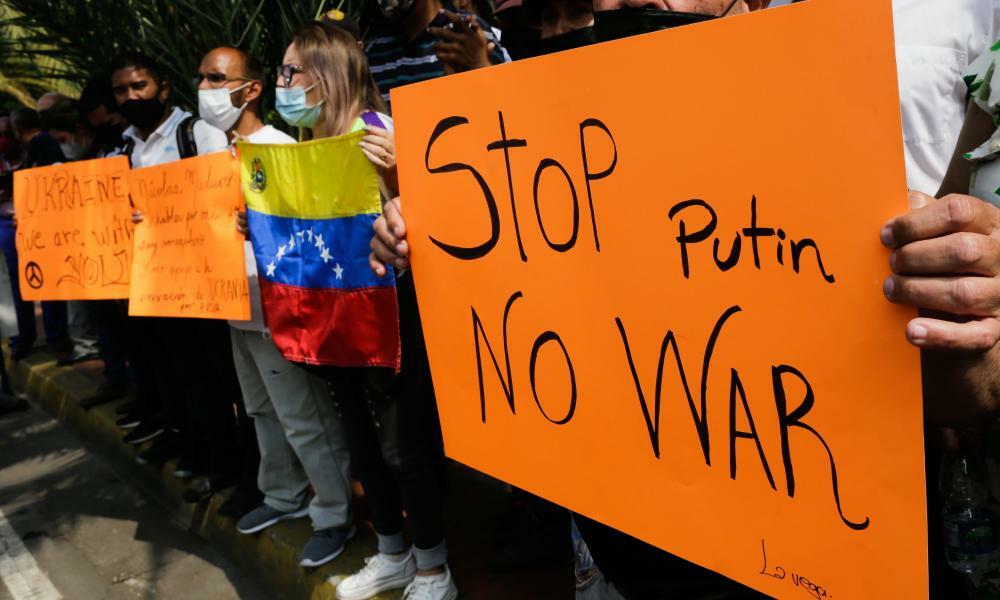 We at Stop the War condemn the invasion of Ukraine, and warmongers on all sides
The anti-war movement is no supporter of Putin. But we can, at the same time, criticise our government’s dreadful war…

Many countries are walking a political tightrope over relations with Russia and Ukraine - with some supporting President Zelensky, others…