'We are not in an ecclesiastic tribunal', court responds to killing squad survivor Salah Abdeslam 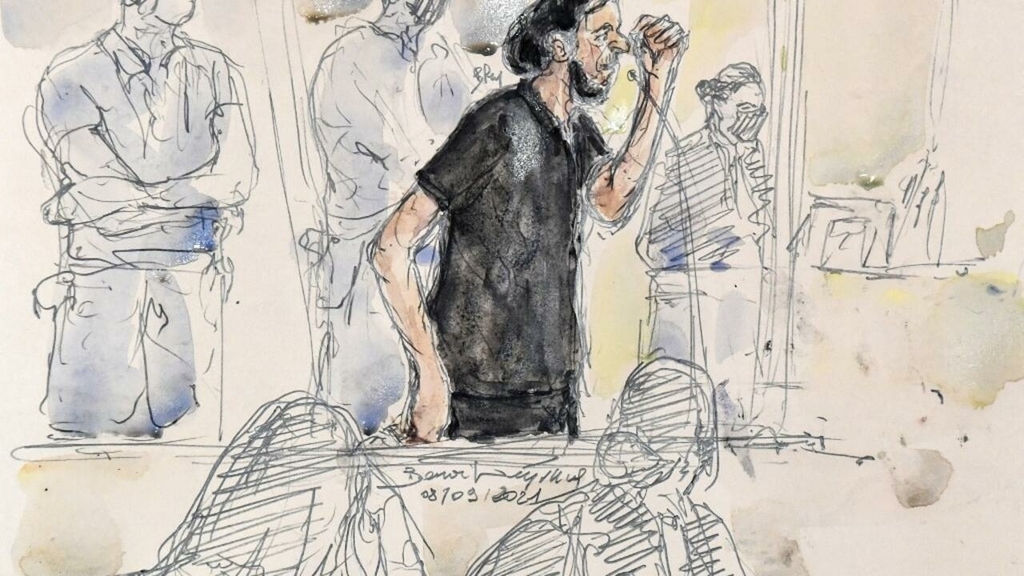 Twenty men are being tried on suspicion of involvement in the November 2015 Paris attacks in which 130 people lost their lives. Fourteen suspects are in court. One man, Salah Abdeslam, the sole survivor of the killing squads which left a swathe of death and destruction behind them on their murderous mission, made himself the centre of attention on the opening day of the trial.

"The hearing is open. Please be seated." With those words, Jean-Louis Périès, president of the five-person tribunal, launched the trial of twenty men believed to have been associated with the planning and execution of a series of attacks carried out by so-called Islamic State commando units in the French capital six years ago.

The attacks killed 130 people, led directly to at least one suicide, and left hundreds scarred physically and psychologically.

The trial opened with the self-identification of the 14 accused actually present. Six others are being tried in their absence.

Salah Abdeslam was the first to be asked to identify himself.

"In the first place," he said, glancing towards the five judges, "I want to say that there is no God but Allah, and Mohammed is his prophet and servant."

"We'll see about that later," replied the president, going on to ask the accused what was his profession.

"I gave up all professions to become a fighter for Islamic State," answered Abdeslam.

He then refused to give the names of his mother and father, saying they had nothing to do with the affair. He said no more.

In calm contrast, the 13 other accused answered the questions without any sign of antagonism to the court.

Each was duly informed that he had the statutory right to make statements to the tribunal, to answer questions, or to remain silent.

Those formalities over, the attention turned to the survivors and families of the victims who wish to take part in the trial as complainants, what the French call "les parties civiles".

There are reckoned to be 1,750 people entitled to be legally represented in court, and to give evidence, if they wish. Several hundred have already come forward. This phase of the trial will ensure the correct registration of any others who might wish to be heard.

And then, the second drama of the day began with the collapse of one of the accused, Farid Kharkhach. He is suspected of having provided false documents to several terrorists, thus facilitating their return to Europe from the Syrian/Iraqi war zone.

The court was suspended so that Kharkhach could receive medical attention.

At the resumption, about 30 minutes later, one of the lawyers representing Farid Kharkhach came forward to complain about the conditions under which his client was being imprisoned.

"This collapse is no accident," said Albéric de Gayardon. "My client is known to be of fragile mental health, he is depressive. I'm afraid this will happen again. He has been subjected to a naked body search on his arrival here today. I ask the court to consider if this treatment is necessary."

At which point Salah Abdeslam made his second dramatic contribution to the proceedings.

"We are treated like dogs," he complained, stabbing the air with an index finger. "Here, it's very nice, with the flat-screen TVs and all that, but back there, behind . . .

"I have been treated like a dog for six years. But I have never complained. Because I know that, after my death, my soul will be in the arms of Allah. And you," pointing towards the judges, "will have to answer."

To which the president replied: "Monsieur Abdeslam, that is a different sort of question. Here we are not in an ecclesiastic tribunal. This is a secular court of justice. Please sit down and be quiet."

It was eventually necessary to temporarily disconnect the microphone in the prisoners' box before the trial could continue.

We have not heard the last of Salah Abdeslam.

The hearing resumes on Thursday.