Tonga hit by tsunami as Australia, New Zealand and US issue alerts after huge volcanic eruption 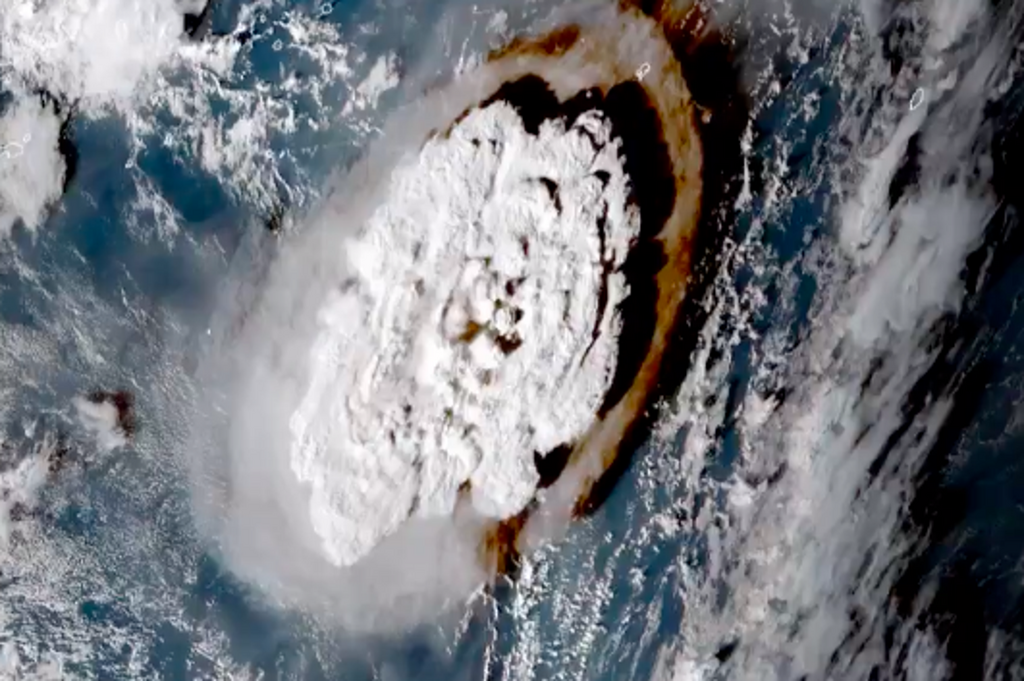 An undersea volcano has erupted near Tonga, sending huge waves crashing across into buildings and triggering tsunami alerts as far away as the US where it has resulted in some flooding.

People were forced to leave their homes while streets and buildings flooded after waves of nearly three feet crashed into Tonga’s main island of Tongatapu.

The UK’s Met Office has also reported that its observation site – 10,000 miles away from Tonga – had picked up “shockwaves” from the eruption.

There were no initial reports of casualties.

At a harbour in Santa Cruz, California, footage shows minor flooding reported to have been caused by the tsunami.

Local media in the Bay Area of San Franscisco have reported that the worst is yet to come.

Emergency services have also warned people to keep away from the coastline.

Officials driving a San Francisco Fire Department truck around Ocean Beach have urged pedestrians to “get off the beach”.

In Hawaii, an island located at the midpoint between Tonga and California, the Pacific Tsunami Warning Centre reported waves slamming ashore, from a foot high in Nawiliwili, Kauai, to two and a half feet in Hanalei.

“We are relieved that there is no reported damage and only minor flooding throughout the islands,” the centre said.

The tsunami advisory for Hawaii has since been cancelled, according to CNN, but remains across the US west coast – stretching from southern California to Alaska, with authorities warning of waves of between one and three feet along the Washington and Oregon coast.

The advisory said strong currents and dangerous waves were imminent and warned people to stay out of the water.

New Zealand’s emergency management agency issued an advisory on tsunami activity for its north and east coasts stating that some parts of the nation could expect “strong and unusual currents and unpredictable surges at the shore following a large volcanic eruption”.

The country’s military said it was monitoring the situation and remained on standby.

Australia’s federal government is also “monitoring the situation” and is “ready to provide support to Tonga if requested”.

The eruption of Hunga Tonga-Hunga Ha’apai, about 65km north of capital Nuku’alofa sent ash, steam and gas up to 20km into the air, Tonga Geological Services said in a Facebook post. Footage captured by satellites showed the eruption clearly visible from space.

Authorities in the nearby island nations of Fiji and Samoa have also issued warnings, telling people to avoid the shoreline due to dangerous waves.

The Japan Meteorological Agency said there may be some swelling of the water along Japanese coasts, but it is not expected to cause any damage.

Jese Tuisinu, a Fiji TV reporter, posted a video on Twitter showing large waves washing ashore, with people trying to flee from the oncoming waves in their cars.

“It is literally dark in parts of Tonga and people are rushing to safety following the eruption,” he said.

Tsunami waves measuring 2ft in height were also generated in American Samoa after the volcanic eruption.

In a statement, the Pacific tsunami warning centre in Honolulu said that “based on all available data, there is a threat to American Samoa of sea-level fluctuations and strong ocean currents that could be a hazard along beaches, in harbours and in coastal waters”.

Japan have also advised people on their Pacific coastlines to get away from the shore as a precaution against tsunami waves caused by the eruption.

Japan has warned of waves as high as three metres, and waves of 1.2 metres hit the south of the country.

The 1.2m tsunami was recorded in the Kominato district of Amami-Oshima Island in Kagoshima Prefecture on Saturday. Authorities warned of waves as high as three metres

A Tonga business news site reported that a convoy of police and military troops evacuated the island’s King Tupou VI from his palace near the shore, taking him to higher ground.

Professor of volcanology at the University of Auckland, Shane Cronin, said the eruption is one of the volcano’s largest since 1100AD and warned that the people of Tonga should be vigilant of further eruptions of the same size.

“The past large Hunga eruptions were comparable to the scale that we have seen in the 15 January 2022 event or larger,” he said. “Based on these past events, tephra [ash] falls of up to 20cm thick can be expected on Tongatapu and the Ha'apai group of islands.

“Geological deposits on Hunga Ha’apai of the AD1000 and AD200 eruptions suggest that there were many eruptive phases during each of the major eruption episodes.”

He added: “This suggests that the current eruption episode could last several weeks or months and that further similar-sized eruptions to the 15 January 2022 event are possible.”

In a later tweet, he added: “Raining ash and tiny pebbles, darkness blanketing the sky.”

In late 2014 and early 2015, a series of eruptions in the area created a small new island and disrupted international air travel to the Pacific archipelago for several days.