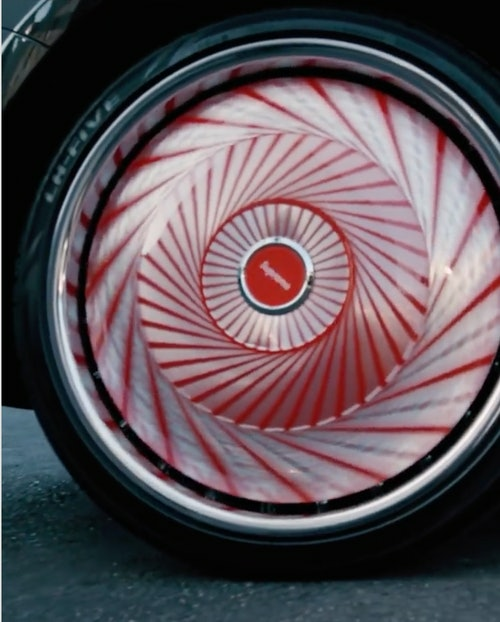 This year, Supreme has offered hypebeasts a multitude of branded transportation methods, from an $11,000 Sea-Doo watercraft to a more accessible bright red subway line. The brand’s newest drop, however, promises its flashiest transit accessory yet: 24-inch aluminum wheels — complete with red and white Supreme logomania — have been produced in partnership with Dub, ready to be sold in sets of four.

Supreme took to Instagram to show off its design, modeling the spinner rims on a Rolls Royce, no less. As the car drives by the camera, Supreme’s iconic logo can be seen rotating within the center of the rim, while additional branding towards the edge of the rims whirls into a meld of red and white. Key Glock’s “Russian Cream” plays in the background to emulate the feeling of driving around on the luxury wheels.

Riding ‘round in Supreme rims —

While Supreme has yet to announce pricing for the aluminum rims, a set of four is expected to retail for no less than $20,000. And at that rate, Instagram commenters said they wouldn’t be surprised to see the wheels accenting a hypebeast’s Honda — if the rims aren’t stolen as soon as the car is in park, that is.

The whopping cost of the wheels, however, ensures that whatever vehicle they outfit will cost four times as much as the rims themselves. Splashing out on such a luxury also guarantees that the car will be valeted in a private area; safe from thieves but not necessarily valets looking to live vicariously (i.e. recreate that scene from Ferris Bueller’s Day Off).

Previous Supreme drops, like its branded skateboards, have allowed consumers to covet their purchases by doubling as art. But as the aluminum wheels are only being sold in sets of four — as they’re meant for function, not decoration — buyers will have to take their purchases to the streets.

Take them for a spin —

The 24 x 9-inch rims have been forged with 6061 aluminum, Supreme’s website flouts, presumably making them the best of the best. As always, a limited amount of stock will be available on the brand’s website, and possibly in stores, starting this Thursday at 11 a.m. ET. Start your engines and get ready to race for the ultimate way to roll out.