Watch Scots racers involved in drama to the end 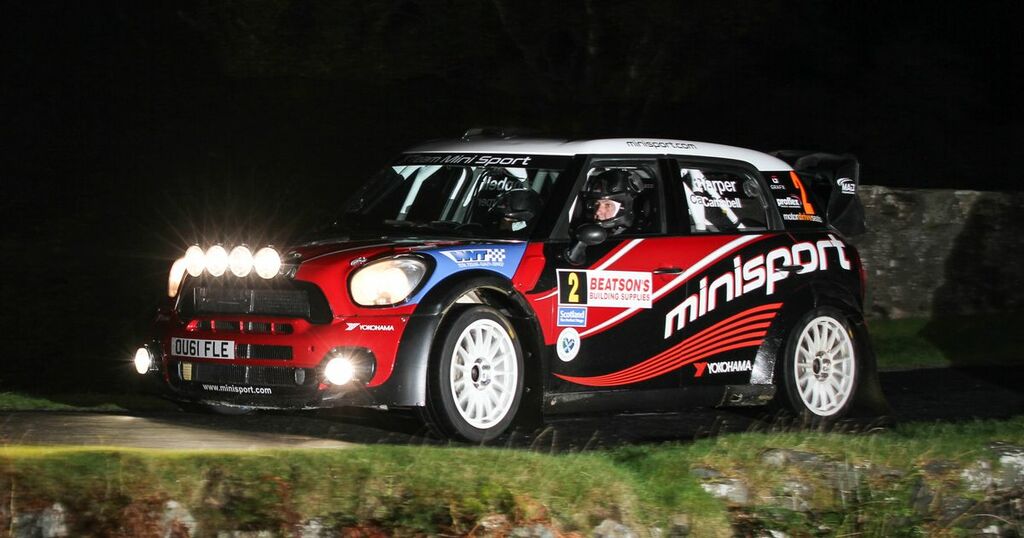 SCOTS motorsport fans were treated to some stellar performances in events ranging from the Mull Rally to the BTCC last weekend.

And this weekend will see more thrills, with racers from north of the Border battling to win the British GT and British Superbike championships.

The Mull Rally – a round of the British championship for the first time ever – proved to be just as scintilating as anticipated.

But Welshman Osian Pryce and co-driver Noel O’Sullivan took their Volkswagen Polo GTI to the BRC win by finishing second. Third place overall went to experienced Scot David Bogie in his Ford Escort Mk2, with John Rowan on the notes.

Englishman Harper had previously won the Mull Rally back in 2002 and said: “It’s been a long wait for this second win and I think that makes it better than the first one. As always, this has been a fantastic but tricky event and we’ll be back next year.”

Top contenders Matt Edwards and Darren Garrod uncharacteristically went off-road in their Polo on the opening stage but eventually recovered to finish fifth overall and second in the BRC standings.

Junior BRC front-runners William Creighton and Liam Regan put their Ford Fiesta Rally4 on the final step of the British title podium after a blistering drive.

Scot Finlay Retson was another to return an impressive showing on the island to take the second Junior spot in his Fiesta Rally4 – while Eammon Kelly came third in that class in a similar machine.

The battle for top honours in the National Rally Title was a spectacular affair throughout the weekend, with a number of Scots in contention.

South of the Border, Fife-based “Flash” Gordon Shedden had a sensational weekend in the penultimate round of the British Touring Car Championship at Donington.

The three-time champ had claimed his first pole position of the season by setting a new qualifying lap record in his Halfords Racing with Cataclean Honda Civic Type R.

The Knockhill racer followed that up with a commanding lights-to-flag performance, despite intense pressure from Vauxhall Astra driver Dan Lloyd, while Flash’s brother-in-law, Rory Butcher, completed the podium in his Toyota Corolla.

Shedden doubled up in the second bout when on-the-road winner Tom Ingram was penalised for gaining an unfair advantage during a tussle for the top spot.

That gave Flash a fabulous 50th win in the BTCC, with Hyundai driver Ingram second and Butcher in third place once again.

And it was Dalkeith’s Aiden Moffat who was able to shine for Scotland in the final race – finishing third in his Infiniti Q50, with Butcher on his tail.

Afterwards, Shedden said: “What a boost for the team – to start at the front and get my first race wins of the year is absolutely superb.”

Back at Knockhill, the Scottish Motor Racing Club saw some brilliant battles across its various championships.

The 21-year-old and his Sainteloc Racing team managed to propel the invitational car to ninth place overall in the endurance event at Barcelona in Spain.

He said: “It was a good weekend, when I was out on track – we were right up there with the big names, which was fantastic.”

Sadly, Jonny Adam’s Garage 59 Aston Martin Vantage team had to quit early on, costing them a chance of Pro-Am glory.

Macdonald said: “It wasn’t the race weekend we wanted, but to finish fourth in the championship is still a good result. Thank you to the team for such a great season.”

Now attention will turn to the British GT and British Superbikes, with intriguing possibilities involving Scots racers lifting the titles.

Scots endurance racer and British GT champ Sandy Mitchell heads to Donington Park this weekend for the season finale still locked in an intense battle that could see him retain his title.

The 21-year-old, from Forfar, partnered by Adam Balon in the Barwell Motorsport Lamborghini Huracan GT3 Evo, knows that he has to win.

Mitchell starts the two-hour race at the Leicestershire circuit 26.5 points behind the championship leaders – interestingly the sister Barwell Lamborghini.

But with 37.5 points available to the race winners, the Scot is fired-up for maximum assault. He said: “The first goal for Adam and I is simply to go out and win the race.

“That’s the one piece of the weekend we can control directly. After that, it’s a case of seeing where the other cars finish in the race. It’s going to be a real nail-biter.”

Arguably, Motherwell’s Ian Loggie and his Mercedes-AMG fellow driver Yelmer Buurman have an even better chance of being crowned.

Two-wheel racing fans will be glued to the British Superbike Championship finale at Brands Hatch – with Scot Tarran Mackenzie leading by a narrow margin from McAMS Yamaha team-mate Jason o’Halloran.

Mackenzie said: “I’m really looking forward to Brands this weekend. I’ll approach it like any other – try to do our best and take it race by race. I’m ready.”

Perth 20-year-old Rory Skinner will also be concluding a great debut year on the BSB main stage aboard his FS-3 Racing Kawasaki bike and said: “I am hoping to end my first superbike season on a high.”