WATCH: PM Modi gets emotional while listening to girl share her dream of becoming a doctor

The PM asked the man, Ayub Patel, if he was providing education to his daughters, to which the latter said that one of the three daughters wanted to become a doctor.

PM Modi asked the reason for the daughter to choose the medical profession as a career, to which she said: "I want to become a doctor because of the problem that my father is suffering from".

Getting emotional about the response of the girl, the prime minister maintained a few moments of silence and lauded her strength.

The PM also asked how the family celebrated the festivals of Eid and Ramzan and offered to help the daughter with her medical education if he ever needed it. "You have to fulfil their dream," he told Ayub.

Meanwhile, PM Modi stressed 100% coverage of the welfare schemes and said that saturation is his dream.

"My dream is saturation. We should move towards 100% coverage. Government machinery should get used to this and a belief should be generated among the citizens," he said.

"The country has made this resolve to cover 100% of the beneficiaries. When there is 100 per cent coverage of schemes, the appeasement politics come to an end. There remains no space for it," he added.

The PM also highlighted the motive of his government as it moves to complete eight years at the Centre, and said that his tenure has been dedicated to service, good governance and welfare of the poor.

"The eight years of my government at the Centre have been dedicated to service, good governance and welfare of the poor. Whatever I am able to do today, I have learnt it all near you. I have experienced poverty, pain, development and troubles with extreme proximity while living among you. It is through that experience that I am working for the citizens of this country as a member of the family. It is the government's effort that the deserving beneficiary should not be left behind from the government schemes," said the PM. 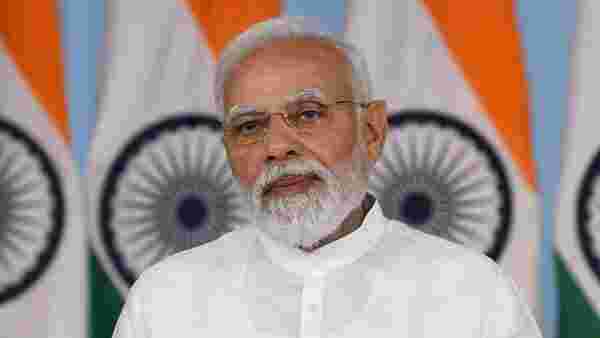 ‘If one becomes PM twice..’: PM Modi recalls what senior opposition leader said on becoming PM twice
'They don't know Modi is made up of a different soil. The land of Gujarat has made him. That's why…

Livemint
Manik Saha appointed new CM of Tripura: All you need to know about him

Dr Saha, a Professor of Dental Surgery, joined the BJP in 2016 from the Congress. He was appointed state BJP…