Watch Live Sunday: A Daring New Mission To Take Telescopes Closer To The Sun Than Ever Before

The sun is our light-giver, our life-giver and, for astronomers, it’s a template for understanding all the other stars in the night sky.

In fact, much of what we know about stars in general comes from our studies of our sun, but there are massive gaps in our knowledge:

Solar astronomy is currently getting a lot of attention. Earlier this month saw “first light” at the DKIST solar telescope and its spectacularly detailed images of the sun’s surface.

Now comes Solar Orbiter—also called SolO—a spacecraft designed to take more high resolution image of the sun from three-quarters of the way to the sun from the Earth, and photograph the sun’s poles for the first time.

How to watch the Solar Orbiter launch

At 11:03 p.m. EST on Sunday, February 9, NASA—in conjunction with ESA (the European Space Agency)—will attempt to launch Solar Orbiter, a spacecraft designed to get super-close to the sun, from Space Launch Complex 41 at Cape Canaveral Air Force Station (CCAFS) in Florida.

You can watch Solar Orbiter launch on an Atlas V 411 rocket on NASA TV:

How long will Solar Orbiter take to reach the sun?

This is a unique mission because it will bring telescopes closer to the sun than ever before—just 26 million miles away (0.28 au)—and it will gradually increase its orbital inclination to 33º above the ecliptic (the plane of the solar system).

Solar Orbiter will take just under two years to cruise to its initial operational orbit, making gravity-assist flybys—”slingshots”—of both Earth and Venus to enter a highly elliptical and uniquely inclined orbit around the Sun. That will enable it to get new perspectives of the sun, including imaging the poles, something that’s never been done before. At times it will be well inside the orbit of Mercury.

Solar Orbiter will actually be in an orbital resonance with Venus, so will use the planet routinely to alter its trajectory. Its first close solar pass will take place in early 2022 at around a third of Earth’s distance from the Sun.

Solar Orbiter will be confined to the same plane as the planets—the ecliptic—for the first few years, but each encounter of Venus will increase its orbital inclination. Here are its scheduled flybys:

What will Solar Orbiter do?

Designed and built in the UK by Airbus Defence & Space (ADS), Solar Orbiter has a suite of 10 different scientific instruments. “The idea is that we will be able to link what we measure in-situ around the spacecraft with that we observe on the solar disc with our on-board telescopes,” said Yannis Zouganelis, ESA deputy project scientist for Solar Orbiter at the European Space Astronomy Centre in Madrid, during a NASA-organized conference call last week with journalists. “We’ll be making a lot of observations for the very first time.”

They include the first telescope observations from this close to the sun, and the first images of the north and south poles of the sun, but crucially Solar Orbiter will also be able to make the first full observation of the solar wind. “Starting by identifying the source of the solar wind on the sun, we’ll measure all of its properties as it flows through the external atmosphere of the sun and as it reaches and passes our spacecraft,” said Zouganelis.

How will Solar Orbiter stay safe close to the Sun?

Key to Solar Orbiter’s success is new heat-shield tech to protect its instruments as they face up to 13 times the heating that satellites in Earth orbit have to cope with. This allows it to get so close to the sun. It will get as hot as 500ºC/932ºF, and it’s vital that the heat shield stays facing the Sun otherwise its sensitive instruments will be fried.

Why do we need the Solar Orbiter?

Our star is magnetically active, with flares and coronal mass ejections (CMEs) from its surface unleashing charged particles moving towards our planet. They’re deflected by Earth’s magnetic field, with the northern and southern lights the visual evidence. However, a raging geomagnetic “super solar storm”—which new research suggests should occur every 25 years—is a threat to satellites, communications, navigation signals, power grids and astronauts.

How do flares and CMEs impact the solar system? How do solar eruptions produce the energetic particles that cause extreme space weather at Earth? Solar Orbiter will help scientists understand how the sun works because solar astronomy is our prime defence against a raging solar storm, which could be disastrous.

Will the Solar Orbiter work alone?

Solar Orbiter is just the latest addition to the Heliophysics System Observatory (HSO), a fleet of satellites performing heliophysics science investigations. “We really want to understand this star,” said Nicola Fox, director of the Heliophysics Division in the Science Mission Directorate at NASA Headquarters in Washington. “So we send a fleet of spacecraft in, and though they do good work on their own, they’re so much more powerful together.”

Launched in August 2018, NASA’s Parker Solar Probe has now completed three of 24 planned passes through the Sun’s outer atmosphere—its corona—and is now on its fourth orbit, which cuts in even closer. “On Parker Solar Probe’s next orbit, perihelion number five, we’ll have Solar Orbiter up in space and taking measurements,” said Fox. “For me, the cool thing is that a lot of the instruments on the Parker Solar Probe and the Solar Orbiter are very similar, so we’re going to be able to take multi-point measurements from the first orbit in a key region of the hemisphere,” she added. “Solar Orbiter will get into a unique location from where it can image the Sun’s poles and will add a whole new dimension to what we can do … this is such a great time to be a heliophysicist.”

With the launch of Solar Orbiter, astronomers will get even closer to answering fundamental questions about the physics of our star. 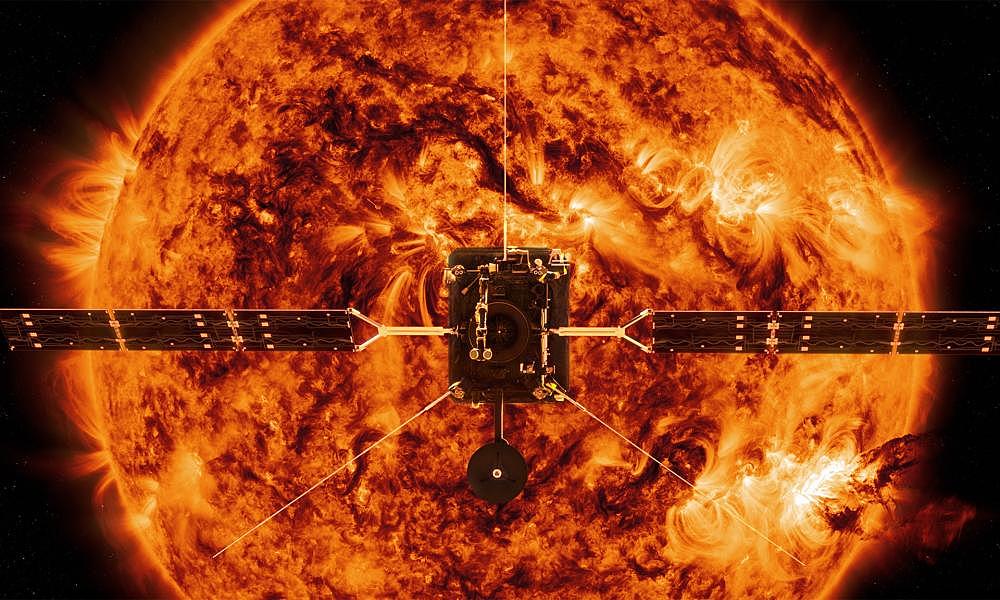 A new spacecraft built jointly by U.S. and European space agencies is ready for a blazing journey to the sun…

Reuters
A spacecraft launching Sunday will take the first-ever images of the Sun's poles
ORLANDO, Fla. _ On Sunday night, a $1.5 billion spacecraft is scheduled take off from the Space Coast on a…

The Solar Orbiter, a spacecraft designed and built in Stevenage, is ready for its journey to the Sun in a…

Evening Standard
What's the weather like in space? A new mission seeks to find out

The mission is expected to launch to space from Florida on Feb. 9.