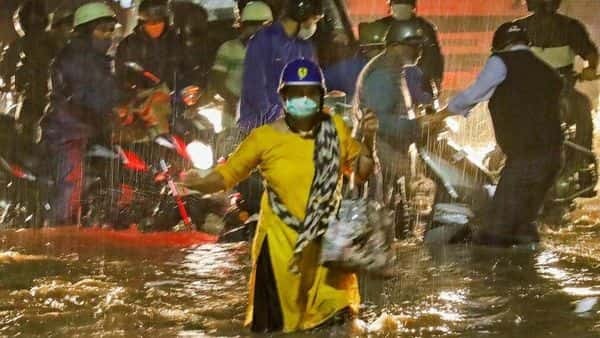 The heavy downpour on Monday, not only brought the Bengaluru airport to a standstill, but also exposed the lack of preparedness and planning of the civic agencies once again.

Road to the Kempegowda International Airport was waterlogged due to heavy rainfall, making it difficult for the passengers to reach the airport.

Several taxis were stranded on the roads leading to the terminals as hundreds of passengers waited with luggage.

In clips shared by passengers on Twitter, it can be seen that they are forced to take tractor ride to airport to catch their flights.

Following the heavy rain, a man was killed due to a short circuit in a house that was flooded, in the Konappana Agrahara limits of Bengaluru.

Netizens have shared videos of the flooded airport on social media, which have now gone viral.

Chaotic scenes at Bengaluru international airport (KIA) and roads leading up to it as heavy rains wreak havoc. Roads flooded with water and several commuters left stranded, tractors are helping commuters in and out of airport.
Pick & drop points flooded near the terminal gate. pic.twitter.com/JAC4K4LpNT