In Syria’s last opposition stronghold, the worst fears of millions of people are coming true. With the help of brutal Russian airstrikes, Syrian government forces have seized about a third of Idlib Province over the last two months, pushing over 900,000 of the region’s 3.5 million people out of their homes and north toward the nearby Turkish border, where another 800,000 displaced people already live in crude, overcrowded camps.

The current wave of refugees fleeing Idlib, about 80 percent of whom are women and children, is now the largest exodus of Syria’s nine-year conflict. Aid agencies are overwhelmed, and food is scarce. With tent camps and even public buildings near the Turkish border already housing as many refugees as they can hold, 170,000 displaced people have been forced to sleep in unfinished buildings, in fields, or along roads in temperatures that frequently drop below freezing; babies and young children have died of exposure.

A CRISIS IN THE MAKING

It is clear what will happen if the Syrian army captures these civilians. Tens of thousands will be arrested; many will simply be killed. Amnesty International, Human Rights Watch, and the special UN Commission of Inquiry on Syria have all detailed the atrocities that President Bashar al-Assad’s government has committed against civilians and even aid workers. When Assad’s forces reach the Turkish border, the grim fate of the refugees will be sealed unless Turkey allows them to cross.

But Turkey already hosts 3.6 million Syrians, and its patience is wearing thin. Unable to absorb another wave of refugees on this scale, Turkey has deployed its own troops to Idlib in the hopes of deterring the Syrian advance. Turkish President Recep Tayyip Erdogan has threatened to push the Syrian army back to the position it held before this latest round of Idlib fighting began. Russian warplanes control the skies over western Syria, however, and Ankara doesn’t want to confront Moscow alone in Idlib. (NATO, a defensive alliance to which Turkey belongs, won’t support Turkish forces operating outside the country’s borders.) Syrian government forces, backed by Russian aircraft, have already struck Turkish positions, and 13 Turkish soldiers have been killed. Ankara is sending reinforcements, but Turkish troops have acted with relative restraint, allowing the Syrian army to bypass and even surround them as it advanced.

As recently as February 17, Assad pledged to recapture all of Idlib; his troops occasionally pause their advance and then start moving again, gaining ground where resistance is weak. If Turkey can’t stop Assad’s advances, it will be forced to open its border. And since it can’t take in so many refugees, it will allow many if not most of them to move through the country and on to Europe. This wave of Syrian refugees will be even bigger than the one in 2015 that upended politics in Europe and led to increased support for the extreme right in many countries.

The large Turkish military presence might deliver a last-minute reprieve in Idlib. But prudence requires that an alternative plan be ready. The best option that eschews direct U.S. military intervention is a safe zone located on the Syrian side of the Turkish border that is defended by Turkish artillery, missile, and antiaircraft systems located on the Turkish side of the border. If Syrian aircraft approach the safe zone, Turkey-based air defenses could hit them in Syrian airspace. This might be enough to deter the Syrian military; Syrian fighters have stopped flying where the armed Syrian opposition used Turkish missiles to shoot down two Syrian helicopters earlier this month. If it is not, and Syrian ground units fire on or approach the safe zone, Turkey could counter with artillery and rocket fire, coordinating with Syrian opposition fighters. The safe zone could be less than ten miles deep—only as far as the Turkish military could reliably cover from its side of the border.

Idlib is not the place to settle scores with Ankara.

A safe zone is not a new idea, and it has several downsides that led the Obama administration—in which I served—to discard it. The biggest potential problem is protecting the safe zone itself.  Syrian forces would almost certainly test the safe zone, triggering a Turkish defensive response. If Russian aircraft back a Syrian incursion and shoot at Turkish units defending from inside Turkey, then NATO should invoke Article 5 to defend Turkish sovereignty and those Turkish units. This commitment has existed since Turkey joined NATO 68 years ago, but now it would face its greatest test. Russia and Syria have violated Turkish airspace or fired into Turkey several times since 2014. Never in the history of the alliance, however, has such intense fighting raged near a NATO border. Turkey has many critics in Washington and other NATO capitals who are displeased with Turkey’s purchase of a Russian air defense system, Turkey’s dismal human rights record, and its hostility toward the Syrian Kurdish militia that partners with Washington against the Islamic State (or ISIS). But Idlib is not the place to settle scores with Ankara. Beyond the enormous humanitarian stakes, the likelihood of huge new refugee flows again destabilizing Europe requires NATO to stand by Turkey if its forces defend a safe zone just inside Syria.

To minimize the risk of a NATO-Russian confrontation, the message from Washington and NATO capitals would have to be clear: NATO members recognize that the safe-zone territory is part of Syria and should revert to Syrian government control when there is a political resolution to the war. NATO members must also support the struggling UN political process that Russia also backs. In the meantime, the sovereign Syrian government must stop violating international legal norms with its domestic brutality that impels millions of its citizens to flee to neighboring states and provokes widening instability. NATO will defend its member states’ borders.

Beyond the difficulties of defending the safe zone, Turkey and the international community will need to screen those seeking protection there, expelling jihadis who mix in with the fleeing civilians. The United States and its NATO allies won’t want to defend, even indirectly, a narrow strip dominated by terrorist groups. Ideally, the UN Security Council would pass a resolution authorizing the safe zone and mandating the deployment of international observers who would establish screening mechanisms and a police force acceptable to NATO members and to Russia. A UN Security Council resolution could also allow for humanitarian workers to access the safe zone.

A safe zone is not a long-term fix.

A UN Security Council resolution will require Russian acquiescence, of course, and Moscow won’t agree without an incentive. Western countries need to be prepared to make a concession. One option that would likely garner Moscow’s interest would be the removal of some of the many sanctions against the Syrian government. For example, the West might suspend sanctions against the delivery of oil to Syria, a step that would help Russia’s ally in Damascus. Obviously, if Syrian or Russian military actions make the safe zone inoperable, sanctions would have to snap back.

A safe zone is not a long-term fix. But it will forestall a severe and immediate crisis if, or rather when, the Syrian army begins advancing again under a Russian air umbrella. A Syrian-Russian victory in Idlib is not far off, and millions of civilians have nowhere to go except to try to escape to Europe. Washington needs to start laying the groundwork for a safe zone now. That means starting to talk with Moscow immediately about the unacceptability of driving refugees to Turkey, how to identify jihadis, how to determine the shape of a safe zone, and how to arrange de-escalation measure so that another Russian aircraft is not shot down inside Turkey. That also means rallying the support of NATO members to back Turkish plans and to organize a humanitarian response to support the safe zone. The next Syrian army offensive could begin within weeks. There is no time to waste. 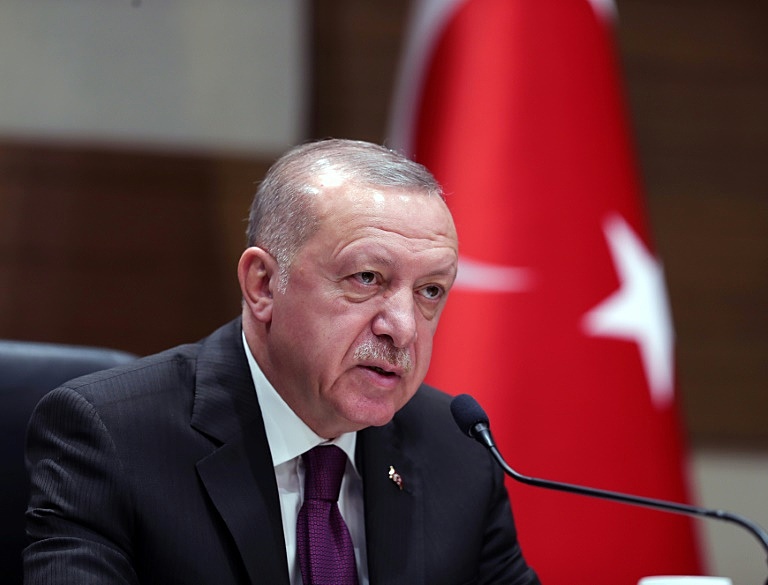 How to save face in Syria: Erdogan's conundrum
Istanbul (AFP) - As Syrian President Bashar al-Assad's regime presses ahead with a relentless campaign, his counterpart across the border…

Syrian opposition factions backed by the Turkish military have seized the town of Nairab in northwest Syria's Idlib, Turkish and…