Warholm back from ground zero after stunning record at Olympics 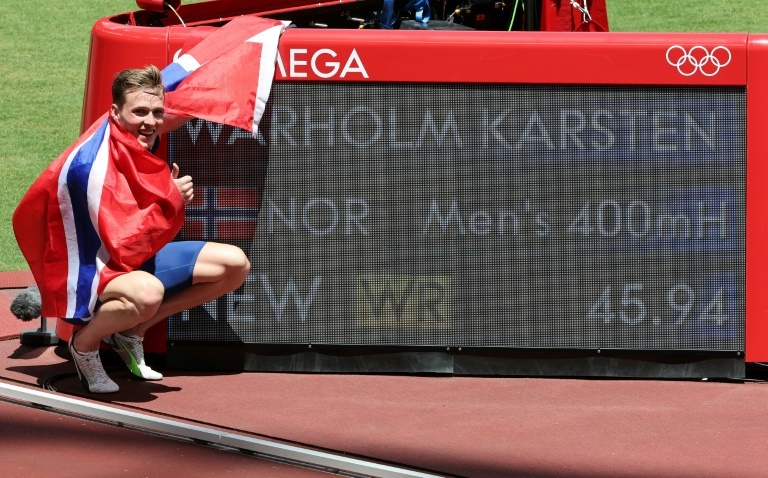 Zurich (AFP) - Karsten Warholm produced one of the most memorable runs in Olympic history when he smashed his own world record to win the men's 400 metres hurdles gold in Tokyo.

It was a moment the Norwegian admitted he had dreamed about "like a maniac".

The 25-year-old, however, said it had been a "mental process" to get his head around his record-setting feat, "the closest I've ever been, or maybe ever going to get to a perfect race from what the outcome was".

"I've been so focused on the Olympics and everything that I was going to do there," the two-time world champion said ahead of the Diamond League finals in Zurich.

"When you achieve all those things that you've been dreaming about, you get happy but somehow you get empty as well because everything that you've been motivated for and working towards is over.

"You reach all your goals and you need to reboot the system again.

"It's another world and I have to get used to that as well and keep on pushing.That's why I'm back, trying to run again at the Diamond League and in future try some different events because I always love new challenges."

While acknowledging that the 400m hurdles will always be his main event, Warholm said he wanted to always keep the curiosity of his "inner child" with regards trying other events and would likely continue to dabble in the flat 400m.

"I'm not sure how fast I can go, but that's always what you're wondering.But that's why you race, to find out," he said.

"It's also good to get on a starting line and being a bit nervous because you don't know what you're getting yourself into.

"The last time didn't go the way I'd planned it to," he added in reference to his fourth-placed finish at the Lausanne Diamond League meet.

That result, he joked, might have had something to do with his celebratory welcome back in Norway from the Olympics.

"They were standing there at the airport with a beer!We had a little gathering at Bislett Stadium, celebrating the medal, my friends were there, family," he said.

"Thinking about that race in Lausanne, I should probably have skipped the beer!"

Warholm said that while a return to competition had been tough, he was at least still motivated by training.

"I love the training.I was back training very, very quickly after Tokyo," the Norwegian said.

"Competition wise it's very hard to go after a record of 45.94 because you know that's something you're not going to do every day.

"Now I have it and I have to find new terms."