Recently I stopped reading a popular book partly because the story hinged on the death of children. Not that I was pro-killing children in art before, but since becoming a parent, that's a plotline I and many people with families have difficulty with, especially if the story doesn't really merit it. What about the deaths of everyone else, in theory to protect a couple of kids? That's a plot "Doctor Strange in the Multiverse of Madness" wants us to swallow, making a mother the villain.

In the latest Marvel film, Wanda (Elizabeth Olsen) is a single mother (in some universes), yet her actions in the film defy logic, seemingly out of step not only for a mom but for her established character. More plot device than person, is this one more woman role written thinly by a man, "Loki" scribe Michael Waldron (with notes from Olsen)? The movie's idea of motherhood and womanhood is shallow, at best: an Instagram fantasy.

RELATED: "Harry Potter and the retconning of Dumbledore: It's no longer about the story"

The latest "Doctor Strange" movie picks up where the streaming series "WandaVision" left off (which has to make it confusing for the many people without a Disney+ subscription). Wrecked with grief over the death of her husband, Vision, in the Disney+ show Wanda created a magical world where he's still alive, they're together and they have twin boys. But at the end of "WandaVision," Wanda, going through the stages of grief, realizes the harm she caused many innocent people with her invented world, and that she has to give up her fantasy and learn to live with loss.

"Doctor Strange in the Multiverse of Madness" wants you to pretend that never happened. Quickly, in her very first scene, Wanda switches from a person healing to a murderous villain (the Scarlet Witch). Never mind all that other stuff, including pesky character development.

The plot of "Doctor Strange" is that Wanda is going to kill a young girl, America Chavez (Xochitl Gomez), in order to obtain the girl's power of traveling through universes. Wanda wants this ability to get to her sons. But her sons, living in another universes, are fine, well cared for by other versions of Wanda herself, which she knows going into it. There's no tension there. So . . . what's the reason for trying to kidnap them again?

Wanda is a saintly mother of boisterous sons, or a childless demon, trying to kill everyone. She's a character defined only by her relationship to mothering.

One realistic detail of the film? Wanda and the boys' house is always messy. Because the boys' father (at least the one they knew) is dead, Wanda doesn't have any backup. As a fellow single mom said to me recently: "I get Mother's Day and Father's Day."

As a mom, Wanda doesn't have daughters, little witchlings like her. Instead, she has boys. Being the longtime single mother of a son myself, you have to model strength as well as vulnerability, to fix everything from the car to the dishwasher to hurt feelings alone, being there to pick up all the pieces yourself.

But that would be true, no matter the gender of my child. The film plays into the archetype of the #boymom, a popular hashtag on Instagram, often accompanying stories that imply mothering boys is somehow harder, more wild and more a noble sacrifice than parenting other children, and the mother of sons is more devoted, more worthy of adoration.

As Nicole Pecoraro writes about the boymom idea: "I have to wonder if we aren't perpetuating a stereotype of the male gender by blowing up this identification of a parenting experience as chaotic and difficult — or as more important, and deserving of a greater degree of pride — just because we're raising boys instead of girls."

This is a stereotype replicated in "Doctor Strange." Wanda is a saintly mother of boisterous sons, or a childless demon, trying to kill everyone. She's a woman character defined only by her relationship to mothering.

The film is rife with misplaced grief. Nowhere does it mention Wanda's husband, Vision.

It's not just Wanda and her one child against the world, which is a powerful if sometimes hard relationship. Wanda's boys are twins, as Wanda herself was. That is an intense and specific bond, but the meaning and power of being a twin is absent from the film. Wanda is outnumbered. There are more kids than her and they share a connection without her — a unique closeness, possibly even a language. Perhaps as such, they are less vulnerable than a single child alone. Whatever happens to Wanda, the boys have each other.

Along with missing the importance of twins, the film is rife with misplaced grief. Nowhere does it mention Wanda's husband, Vision, such a central part of "WandaVision." The true and deep love that Wanda and Vision shared — after a long and complicated buildup — is just erased. Vision is not in the film (was Paul Bettany busy?), not even as someone the kids say they miss.

For all that the film hinges on returning to them, we don't get many scenes of the boys in "Doctor Strange." We get the same scene repeated over and over again. A movie night, where the kids beg their mom for ice cream and the trio falls asleep together on the couch. Sounds like a nice Friday, but it's not a nuanced view of single motherhood.

If that's your thesis, why would Wanda be so willing to harm, even kill, another child?

It's not complicated. It's an idealized, easy view of parenting, like a social media post. Wouldn't Wanda want to dreamwalk, a kind of astral projection involving a lot of candles, into a moment when her kids might actually need her?

A big part of motherhood, for better or worse, is caring for another life more than your own. Wouldn't Wanda want her children to be happy, or consider their feelings earlier? It feels like she's hurtling after America (who punches through universes in star-shapes, like a multiverse Rainbow Brite who doesn't have much of her own character development, sadly) not to save her kids, but to save some uninformed idea of a mother.

"Doctor Strange" presents a simplistic view of womanhood: that the only way a woman can "go evil" is to be separated from her children, particularly her angel boys. That implies that motherhood is all a woman who becomes a mother is. And if that's your thesis, why would Wanda be so willing to harm, even kill, another child (America)?

Part of the problem with the film is that Wanda's motivation is murky and thin. Does she want power — or her sons? Some fans might say the Darkhold made me do it — but specific details of that are mostly absent from the film too. As the YouTube channel ScreenCrush, which calls the treatment of Wanda's character "borderline character assassination," says: "witch lady go bad cuz the screenplay say so." (For another, better example of an established, female character going to the dark side after trauma, see Dark Willow.)

"Doctor Strange" has Sam Raimi's wonderful ghoulish touches (more of that, please!) but what it doesn't have is a mother of sons who seems like anything more than a man's paper doll or the flat, fake image of a momfluencer. 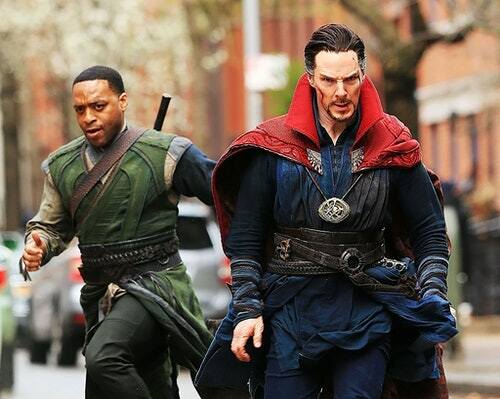 Inverse
Here's how the 'Doctor Strange' Illuminati death scene came to life
Warning: This story contains spoilers for "Doctor Strange in the Multiverse of Madness."