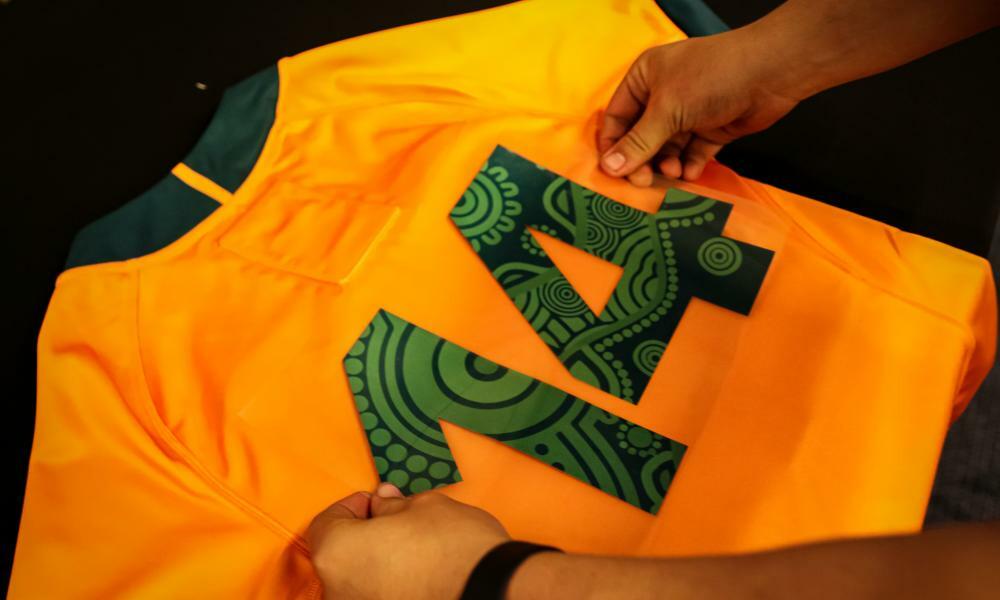 An Australian representative team will bear both the coat of arms and a First Nations design on its primary playing kit for the first time, after the Wallabies unveiled a new jersey incorporating Indigenous artwork in the numbers on the back.

Rugby Australia released the tweak to their latest gold playing jersey on Wednesday, with players’ numbers to feature work by the Kamilaroi/Gamilaraay artist, Dennis Golding.

Rugby Australia said the artwork “celebrates and recognises Australian rugby’s First Nations peoples” and highlights all communities coming together as one.

Golding’s work has already been seen on Australia’s existing First Nations strip, which was first used during a Test against the All Blacks in 2017 and has since been given an outing a further four times.

The new, permanent design, will make its debut in Sunday’s Rugby Championship Test against world champions South Africa on the Gold Coast. The First Nations jersey will be brought out again for the Test match against Argentina in Townsville two weeks later on 25 September.

Wallabies coach Dave Rennie said it had been the playing group who advocated for the design to be incorporated on a permanent basis.

“This jersey holds significance to every member of our team, and to have the First Nations artwork now on our primary jersey is something incredibly special,” Rennie said.

“As a squad, we pride ourselves on culture and inclusivity, and that’s what the First Nations jersey represents, and to now have it on both jerseys is something special for our rugby community.”

Indigenous player Andy Muirhead, who was called up into an extended Wallabies squad for the first time for the three-Test series against France earlier this year, said incorporating the design was a big step forward in the recognition of First Nations people.

“The boys wearing the Indigenous jersey over the last couple of years has been really nice but this is a nice touch – that the boys can run out every week and display Aboriginal and Torres Strait Islander culture,” said Muirhead. “It’s pretty special.”

The First Nations jersey enjoyed a memorable start to its life in a famous and rare Wallabies’ win over the All Blacks in a Bledisloe Cup encounter at Brisbane’s Suncorp Stadium.

It was then worn at Twickenham against England before making an appearance against Uruguay at the 2019 Rugby World Cup, and two further occasions during the 2020 Tri-Nations tournament – against New Zealand and Argentina – in Sydney.

Rennie said a great deal of thought had been put into deciding when and where to next wear the strip, and that the Wallabies’ clash with Argentina in Townsville was the obvious choice.

“It boasts a strong First Nations community who we represent, and when we wear this jersey, we feel it will provide us with an even stronger connection with our people,” he said.

“As a squad, we pride ourselves on culture and inclusivity, and that’s what the First Nations jersey represents, and to now have it on both jerseys is something special for our rugby community.”