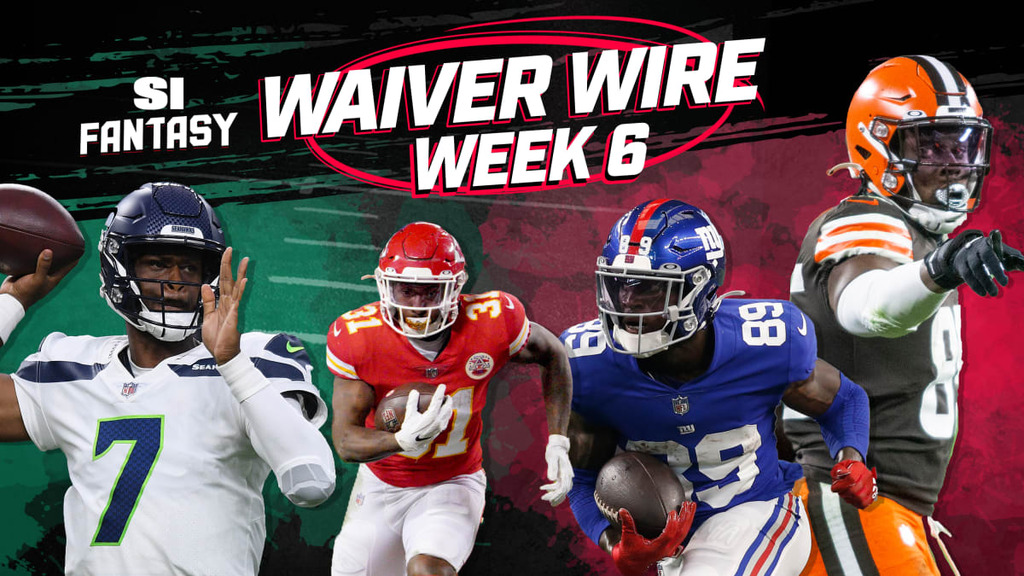 Another fantasy football week with some serious injuries, especially at the quarterback and running back positions. Week 6 is also the first bye week of the season, and that means it’s an important time to hit the waiver wire.

With news that Russell Wilson will be sidelined for at least a month with a ruptured middle-finger tendon, Seahawks fans and fantasy managers will look to back up Geno Smith to try to keep the offense afloat. Smith entered the fourth quarter of the game on Sunday and looked pretty good by completing 10-of-17 passes for 131 yards and a touchdown. He also threw an interception on his third drive, but these numbers would look even better if Lockett hadn't been tripped up on his route. You can never replace Russ, but the 30-year-old Smith looked pretty sharp, considering he hasn't played more than 66 offensive snaps in a season since 2014. Geno is available in 99% of leagues.

A tough New Orleans defense held Heinicke to only a 49% completion rate and no touchdowns Sunday, making it his worst performance of the year. However, in the next few weeks, Heinicke has favorable matchups and should bounce back as a bye-week fill-in. This week he will face the Kansas City Chiefs, who have allowed the most points to opposing QBs this year, and in Week 7, he faces a Green Bay defense who could still be without Jaire Alexander. Before this week, Heinicke had finished as QB13 or better in each of his starts. Heincke is available in 85% of leagues.

Seeing Jones throw for only 230 yards and one touchdown Sunday vs. the Texans was a little disappointing, but Jones has an even tastier matchup this week vs. the Dallas Cowboys if you need a bye-week QB. Of course, we have to factor in at least one Trevon Diggs interception, but the Cowboys are surrendering a league-high 327.6 yards per game and two passing touchdowns per game to opposing quarterbacks. Jones is available in 82% of leagues.

Next Matchup: Jacksonville. Need I say more? Brissett looked good Sunday vs. the Bucs, completing 69.2% of his passes for 275 yards and two touchdowns. This week he faces a struggling Jacksonville team that allows an average of 296 passing yards per game to opposing quarterbacks. Brissett is available in 97% of leagues.

Williams looked good in Sunday night action vs. a tough Bills defense- averaging 5.4 yards on his five attempts and securing three of his five targets for another 18 yards. With news that Clyde Edwards-Helaire will miss a few weeks with a sprained MCL, Williams is the running back to grab in this high-powered Kansas City offense. Williams is available in 83% of leagues.

The Giants were brutalized with injuries on Sunday, not the least of which was Saquon Barkley leaving with an ankle swollen to the size of his thigh. Early reports are Saquon suffered a low-ankle sprain, which is positive news, as he may only have to miss a week of play. In the meantime, fantasy managers and Giants fans will look to Devontae Booker. Booker's 16 carries on Sunday were the most he has seen this year, and he turned them into an inefficient 42 yards and touchdown vs. the Dallas Cowboys defense; however, he also turned three of his four targets into 16 yards and another score. As long as Saquon remains sidelined, Booker should see plenty of work in an offense searching for healthy play-makers. Booker is available in 93% of leagues.

With no David Montgomery, Chicago returned to more of a committee at running back. Rookie Khalil Herbert out-snapped Damien Williams 34 to 31 and was favored in the ground role with 18 carries for 75 yards, though he did not see a single target. Williams is still the preferred running back to roster as he will also have a role in the passing game, but Herbert is available in 81% of leagues.

Damien Harris may or may not be in the doghouse, and he may or may not have a rib or chest injury. Many waiver wire articles will tell you to target Rhamondre Stevenson, and I agree he is worth some of your FAAB, but the New England running back I am targeting is Brandon Bolden. With no James White, Bolden is in an especially good spot this week vs. the Dallas Cowboys defense that has not been efficient vs. pass-catching running backs (see Devontae Booker above). I'm guessing Bill Belichick has noticed. Bolden played a healthy 24 snaps Sunday, and if you are lean at the RB position, he could be a flex play this weekend.

Toney made this list last week, but this week he occupies the top spot after having a true breakout game vs. the Cowboys on Sunday, catching 10 passes for a whopping 189 yards. With no Shepherd, Slayton, Barkley or Golladay, Toney was featured and should continue to be. He's a yards-after-catch monster, effective even with Mike Glennon at the helm. The rookie showed off his playmaking ability no matter the situation. Toney played fewer snaps than Evan Engram and John Ross, but I'll assume he would have had a few more if he hadn't been ejected for throwing a punch at the Cowboys' safety. Rookie mistake. Toney is available in 83% of leagues.

Here's a neat trick: Pick up a player during their bye week. While everyone else is scrambling for replacements for this week, you are looking ahead with eyes on the prize. Marquez Callaway has now put together three consecutive productive fantasy weeks. He is second in snaps only to Alvin Kamara for the Saints, and he saw a season-high eight targets last week for 85 yards and two touchdowns, and in Week 7, he will see a Seattle Seahawks secondary that has allowed the second-most yards to opposing wide receivers. Callaway is available in 70% of leagues.

With Quintez Cephus and Kalif Raymond exiting with injuries, rookie Amon-Ra St. Brown made the most of his opportunities by catching seven of eight targets for 65 yards in Sunday's tough loss to the Vikings. After tying T.J. Hockenson last week for the team-high in targets, he led all receiving categories this week. In deeper leagues, you can consider the fourth-round pick who looks to be Goff's new favorite target.

With no Will Fuller and no DeVante Parker, Preston Williams had a good day. Williams turned five targets into three catches and 60 yards and even added a rushing attempt for another seven. I’ve been a fan of Williams for a while, and it’s good to see him healthy. Next up is a Jacksonville secondary that has allowed the seventh-most yards to opposing wide receivers. If Parker continues to sit, I like Williams in deeper leagues. He’s available in 99% of leagues.

Peoples-Jones leads the Browns with a 67.8% snap share on the season, yet he hasn’t been consistently targeted. Sunday Baker finally looked his way, and Peoples-Jones turned six targets into five grabs and 70 yards. It seems pretty clear that OBJ is not the preferred target in this offense even though he plays more snaps when he is healthy, and it could be worth adding Donovan Peoples-Jones to your bench, though it’s tough to get excited about receivers in this system.

For the first time this year, Brandin Cooks was out-snapped by Chris Conley. Sure, it was only by four, and it was a product of Bill Belichick making sure to take Cooks out of the game, but Conley now has an 80% snap share on the season and looks to be the WR2 for the Texans. Now, that may not sound very exciting, but if rookie Davis Mills can put together a three-touchdown, 312-yard game vs. a Bill Belichick defense, there could be some hope for this Houston team. Conley finished the day with 84 yards and a touchdown on four targets. Teammate Chris Moore had an even better day by securing all five of his targets for 109 yards and a touchdown. Since Cooks will usually be much more involved, if I'm choosing one, Conley is the pickup.

There’s no way to ignore the huge day Njoku had on Sunday, who was perfect with seven catches on seven targets with 149 yards and a touchdown. Njoku led the team in targets and played more snaps than Nick Chubb. Both Hooper and Njoku see a healthy snap share in this system, and last week Hooper had more targets, so don’t spend too much of your FAAB on what could be a very boom or bust play each week.

Plain and simple, there aren’t many pass-catchers left for New York. Yes, I understand if you laugh when I call Evan Engram a pass-catcher, but here we are. It’s the tight end portion of the article. Engram was second only to Devontae Booker on Sunday in snaps, and he caught all four of his targets for 55 yards.

You may recall that Trevor Lawrence targeted James O'Shaughnessy eight times in Week 1 before he hit the IR. In his second week with the team and in the same role, Dan Arnold saw eight targets on Sunday, which he turned into six grabs and 64 yards. He also played the same amount of snaps as Laviska Shenault. With no DJ Chark, Arnold could be an add in deeper leagues, though goodness knows we can never predict what Urban Meyer will do.