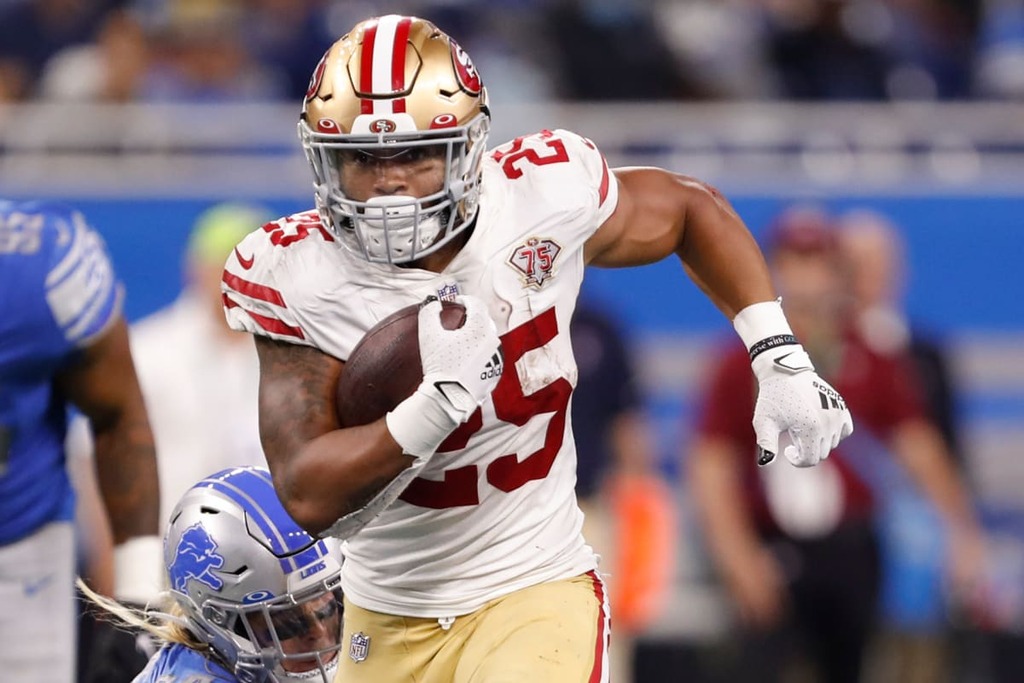 The long drought is over! NFL Week 1 is in the books, and it was as thrilling as we hoped it would be. We saw dramatic come-from-behind wins, big upsets, flashes of rookie superstardom, and Christian McCaffrey return at Avenger level. But, most importantly, for fantasy football coaches, after months of projecting how our players would be used, we finally have some actual data and saw some real action.

It's important not to overreact to Week 1 while also being aggressive on the waiver wire. It may seem obvious, but do not drop or trade Ezekiel Elliott, Saquon Barkley, Najee Harris, Kyle Pitts, Davante Adams, or Aaron Rodgers. With that in mind, here are my top waiver-wire claims for this week.

After Raheem Mostert left the game early with a knee injury, Eli Mitchell saw the bulk of the workload for San Francisco. Mitchell ran for 104 yards and a touchdown on 19 attempts in the plug-and-play run game for the Niners. Trey Sermon was a late healthy scratch, and Mitchell was favored over JaMycal Hasty, who received only one carry. Mitchell was highly efficient at 5.5 yards per carry vs. a bad Detroit run defense, and with news that Raheem Mostert will miss a minimum of eight weeks plus the uncertainty with rookie Trey Sermon, Mitchell should be added in all formats. In deeper leagues, I would also put some FAAB on JaMycal Hasty as it's a good investment in the San Francisco run system. Mitchell is available in 90% of leagues, while Hasty is available in 99%.

Hines is still available in 30% of Fantasy Football leagues, and if your league happens to be one of them, put your claim in now. Besides being the obvious handcuff to Jonathan Taylor, it's clear Hines will have stand-alone value and will often make for a good flex play. After giving Hines a three-year 18.6 million dollar extension and making him one of the NFL's top-ten paid running backs, Indianapolis put him right to work on Sunday. Hines got a lot of looks from Wentz with a team-high eight targets on Sunday. Hines finished the day with six grabs and 82 all-purpose yards.

We knew it would be a committee in the Lone Star State, but Ingram emerged the clear leader in Sunday's matchup vs. the struggling Jacksonville Jaguars. Ingram had 26 carries for 85 yards and found the end zone. I don't recommend a heavy investment in the Texans run game, but maybe it isn't quite as murky as we thought.

In deeper leagues, take a look at Cordarrelle Patterson. The Falcons struggled on Sunday, but Patterson emerged as their most efficient runner with 54 yards on seven carries while also catching both of his two targets for 13 yards. Patterson should function as Atlanta's gadget player in the absence of Julio Jones while also continuing to help in the run game.

Jerry Jeudy left Sunday's matchup with a high ankle sprain and is likely to miss at least 4-6 weeks, which opens the door for more work for KJ Hamler. Hamler had four targets for 41 yards on Sunday, but those numbers would look a lot more impressive if he hadn't dropped a 56-yard bomb in the end zone. But, if drops concern you at all, look no further than his teammate.

Tim Patrick tied KJ Hamler for targets, and he was a perfect 4/4 for 39 yards and a score, following up on his excellent 2020 season with zero drops on 79 targets. Now it appears he will have more opportunity and a more accurate QB, so Patrick is one of my favorite waiver-wire adds this week. Both Hamler and Patrick are available in 98% of leagues.

Zach Pascal had a good day at the office on Sunday, emerging as a big red-zone threat for new QB Carson Wentz. Pascal caught four of his five targets for 54 yards and two scores. With no TY Hilton, it's easy to see the sure-handed veteran continuing to be a go-to for the new QB in Indianapolis. Pascal is available in 99% of fantasy football leagues.

Speaking of veterans, New England made a big statement signing Agholor to a two-year deal worth up to 22 million. In Las Vegas, Agholor racked up 896 total yards on 82 targets while averaging a monster 18.7 yards per reception. Sunday with New England, Agholor still looked good, with five grabs on seven targets for 72 yards and a touchdown. Though Jakobi Meyers saw more targets, Agholor will be more than just a deep-play threat for Mac Jones. Agholor is available in 66% of leagues.

Did you miss out on any of the juicy Dallas offense in your drafts? Well, here's your chance. With the news Gallup will now miss several weeks with a calf injury, Cedrick Wilson should get the chance to prove himself. Wilson saw the bulk of the work in Gallup's absence Sunday, and this morning OC Kellen More said, "Ced will step right in there. No issues. No concerns. He's the utility guy." That's enough for me to take a chance on the wire this week. Last season this team supported three 100 target receivers without Dak Prescott at the helm, so this is a fun, deep cut. Wilson is available in 100% of fantasy leagues.

I loved Kirk as a late-round value and grabbed him in a few of my fantasy drafts, and so far, so good. Kyler Murray is only getting better, Larry Fitzgerald is gone, AJ Green still looks the same as he did in 2020 (spoiler alert- terrible), and Rondale Moore has promise, but he doesn't yet have the chemistry with Kyler. Kirk was a perfect 5/5 Sunday with 70 yards and two scores. He had some big games last year, and I don't see why he won't have more going forward. Kirk should be rostered, and he's available in 86% of leagues.

A popular late-round draft target, Johnson made good for his fantasy coaches with two trips to the end zone on Sunday in the big win for the Saints. Johnson was a 3/3 for 21 yards, and if you are playing the touchdown lotto for TE, this is certainly a good ticket. On the plus side, Johnson saw three end zone targets. On the other side, Johnson only played 12 snaps. I like Johnson but manage your expectations. Johnson is available in 90% of leagues.

Kmet has the second-most targets for the Bears on Sunday night, finishing only behind Allen Robinson. Though his five catches on seven targets for 42 yards may not seem so impressive, none of the Bears' receivers had more than 45 yards vs. the tough Rams' defense. Kmet should improve, and I like adding him now before his stock gets too high.

Jameis Winston looked quite sharp on Sunday, besting the Green Bay Packers and the reigning MVP 38-3. Sean Payton's system seems to work well for the QB who didn't make any overly aggressive decisions that seemed to plague him in Tampa Bay. He was very accurate Sunday with a 70% completion rate throwing for five touchdowns and 148 yards. If you lost Ryan Fitzpatrick, Winston could be a serviceable replacement. Winston is available in 65% of leagues.

Bridgewater is still underrated after having a strong year in Carolina, passing for 3,733 yards with a 69.1% completion rate, sixth-best in the league. Sunday, he looked sharp again, completing 77.8% of his passes for 264 yards and two touchdowns, and those numbers would look even better if KJ Hamler hadn't dropped the 56- yard bomb in the end zone. With his new multitude of talented weapons in Denver, Bridgewater is a good fantasy QB to have on standby. He is available in 89% of leagues.