Wages growth edges up, but still a long way short of the rising cost of living

The annual pay rise trails a 5.1 per cent jump in the cost of living, as measured by the Consumer Price Index, over the same period.

"After accounting for inflation, Australian wages have collapsed over the past year," Mr Pickering observed.

"We haven't seen real wage growth this weak since the introduction of the GST.

"The disconnect between wage growth and inflation would be devastating for household budgets across the country."

Scott Bowerman is not surprised that wages are not picking up more quickly.

He worked as chef for 20 years but, after the pandemic hit, he started a labour-hire business, Chef 4 Hire, in the Victorian regional town of Wodonga.

It was hit hard by staff shortages during pandemic lockdowns.

However, unlike many employers in the hospitality industry, Mr Bowerman said he was no longer having trouble finding workers.

"I've put on 20 staff, with another three over this week, so it's really busy," he told The Business.

While the cost of living has jumped and many employers complain of staff shortages, Mr Bowerman said most workers in the hospitality industry still were not paid well.

He suspects that is why some businesses are struggling to attract and retain staff.

"You're probably looking at around about $15 to $18 an hour for a school kitchen hand, but I pay well above that," he said.

However, he can see a longer term crisis brewing in the sector, with fewer young people undertaking formal training.

Mr Bowerman said TAFE in Wodonga has gone from just over 20 students enrolling as first-year apprentices to just six places this year.

"It's just completely died, our industry," he lamented.

"I'm in the middle of trying to raise that up and talk to high schools and try and get more students and more kids into the industry because, at the moment, we're going to go backwards.

The lack of trainees is an urgent crisis in some sectors, which rely on students to provide additional labour.

She said staff shortages have worsened after many people left the industry during COVID-19 lockdowns and because there were not as many international students studying dentistry in Australia.

She said those students used to work as dental assistants, but now they are hard to find.

"The staff shortage issue is quite challenging in our industry, not only the lack of applicants applying for positions that we have available, but also the short supply coming from temp agencies," Ms Kelepouris observed.

"We don't have access to international students … especially dentists [in] training, who needed to get up their clinical hours.

"A lot of them did sign up to temp agencies, or were available, you know, as casual staff to clinics. That has really declined since the pandemic."

"At a lot of practices at the moment, the hourly rate they're offering is 20 to 30 per cent above what we would have been looking at a few years ago," she added.

A slight increase from the previous December numbers (2.3 per cent) takes annual wage growth back to its highest level since June 2019.

But wage growth remains well below the average level of 3.1 per cent recorded since the ABS started publishing this figure in 1998.

The last time annual wages growth exceeded that average was all the way back in March 2013.

The bureau's head of price statistics, Michelle Marquardt, said a small proportion of in-demand workers in "market sensitive" occupations were getting larger pay rises, dragging up the average.

"Wage growth is influenced by both the size of changes in hourly wage rates and the proportion of jobs recording a change," she explained.

The Commonwealth Bank of Australia's head of Australian economics, Gareth Aird, said the ABS data was backed up by more-recent data his team had compiled from analysing CBA customer bank accounts.

"The upshot is that, whilst wages growth across the economy is moving higher and some people are receiving large pay rises, there [are] not broad-based wages pressures," he noted.

Canberra-based data analyst Adam Stephan-Slade is in one of those in-demand occupations.

He was hired at the start of this year as the business operations manager for horse racing information and news service, Racing and Sports, having spent the most of his working life delivering technology and managing projects for defence.

"There was an opportunity to move to a new and exciting industry as well as get a little bit of a pay bump [of] about 10 per cent," he said.

"If you know good people, [who] you can tap on the shoulder and start a conversation, I think that really helps," he said.

Now he is in a position to hire staff.

"Since I've joined, there has been a number of new hires," he added.

However, only 15 per cent of private-sector workers got a raise in the March quarter.

This is not unusual, as most businesses tend to pass annual pay rises on to workers at the start of each new financial year, so they show up in the September quarter numbers.

However, the ABS seasonally adjusted numbers account for this trend, meaning that the March figure is genuinely disappointing.

The Reserve Bank governor has repeatedly said that wage increases well above 3 per cent are needed to sustainably maintain inflation in the bank's 2-3 per cent target range.

Mr Pickering said economists are somewhat puzzled as to why wages growth is not responding more strongly to falling unemployment.

"Australian wage growth remains at odds with an unemployment rate that is at a near 50-year low," he noted.

"The slow rate of improvement would be a concern for policymakers such as the Reserve Bank of Australia."

After Wednesday's disappointing wages data, most economists now expect the Reserve Bank to lift interest rates by only 25 basis points at its June 7 meeting.

"The RBA is not facing a prices-wages spiral like is being observed in some other jurisdictions," Mr Aird noted.

The CBA is currently expecting the cash rate target to top out at 1.6 per cent by early next year, up from the current 0.35 per cent, but well below market pricing for a peak RBA rate above 3 per cent. 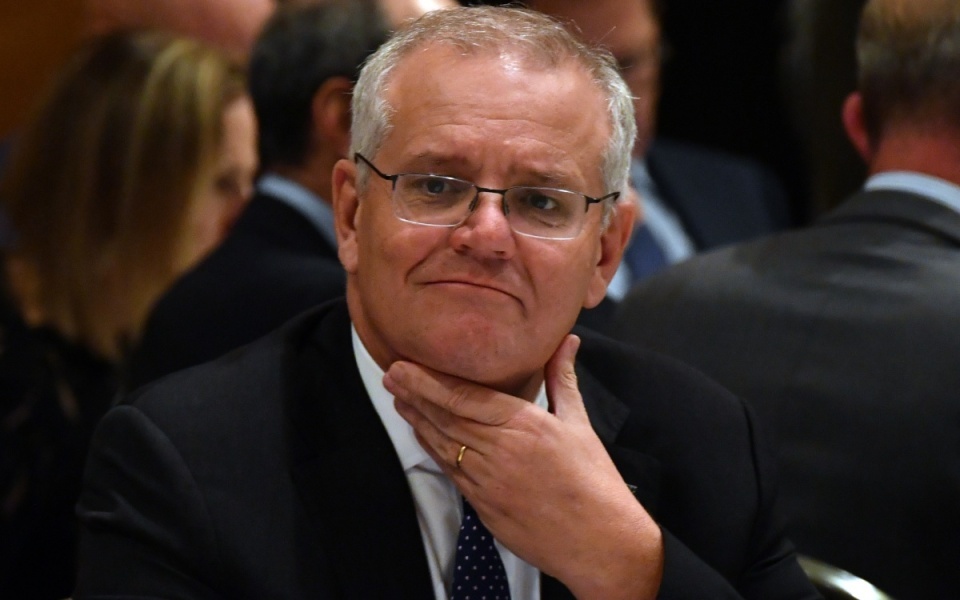 The New Daily
One subscription that gives you access to news from hundreds of sites
Will a 5 per cent pay rise for workers lift the cost of your coffee and petrol by the same amount?

Boosting workers' wages by 5 per cent – for all workers, not just those on the minimum wage — would…

Australian wages have not kept pace with inflation.