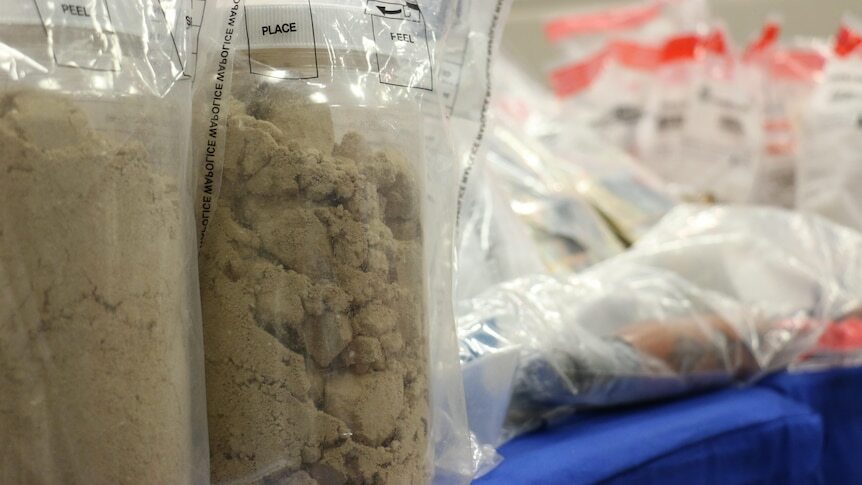 WA Police posed as international drug suppliers to infiltrate local organised crime gangs, resulting in the seizure of more than 30 kilograms of heroin and methylamphetamine and $7 million in cash.

In August, police began investigating a Perth man they believed had links to Balkan organised crime.

They also arrested a 68-year-old man from Perth.

Also in August, detectives posed as drug suppliers and received cash deposits from what they said were established WA organised criminal networks, who placed orders for cocaine and methylamphetamine.

Between August 31 and September 3, WA police arrested 13 people in relation to these alleged drug orders and criminal networks.

Police seized $1 million in cash from a van in Kenwick, and another $650,000 at a residence linked to a man arrested near the van.

They also seized $3 million cash concealed in a consignment on board a truck stopped at the Eucla border leaving WA.

In addition, they received approximately $2.3 million from organised crime gangs, who allegedly thought they were using it to purchase drugs.

Police seized three kilograms of methylamphetamine and 750 grams of heroin from an undisclosed location.

Another 19.5 kilograms of heroin was seized in searches carried out earlier this year, police said.

Deputy police commissioner Col Blanch said the latest $7 million is only a fraction of the money police have seized this year.

"The good news for the WA community is that we can spend this money on public safety and helping the community, rather than some hideous green Lamborghini that drives around the streets and is being used as illicit profits from organised crime," Deputy Commissioner Blanch said.

He said WA Police had benefited from a partnership with international law enforcement relationships developed 18 months ago, including with US-based  Drug Enforcement Administration (DEA).

He said these networks would let them know about any mention of Western Australia in relation to drugs or organised crime.

"They have sent us messages from as far as Colombia, Asia, Africa.

"We go to the side and we penetrate these organised crime networks with aggression.

"We could transport those drugs for them. We could even buy warehouses for them.

"And they fall into our trap."

A total of 19 people have been arrested as part of recent WA Police operations targeting the distribution of methylamphetamine and heroin, and 52 charges have been laid.