Von der Leyen: EU must acquire ‘political will’ to build own military

By Daniel Boffey in Strasbourg 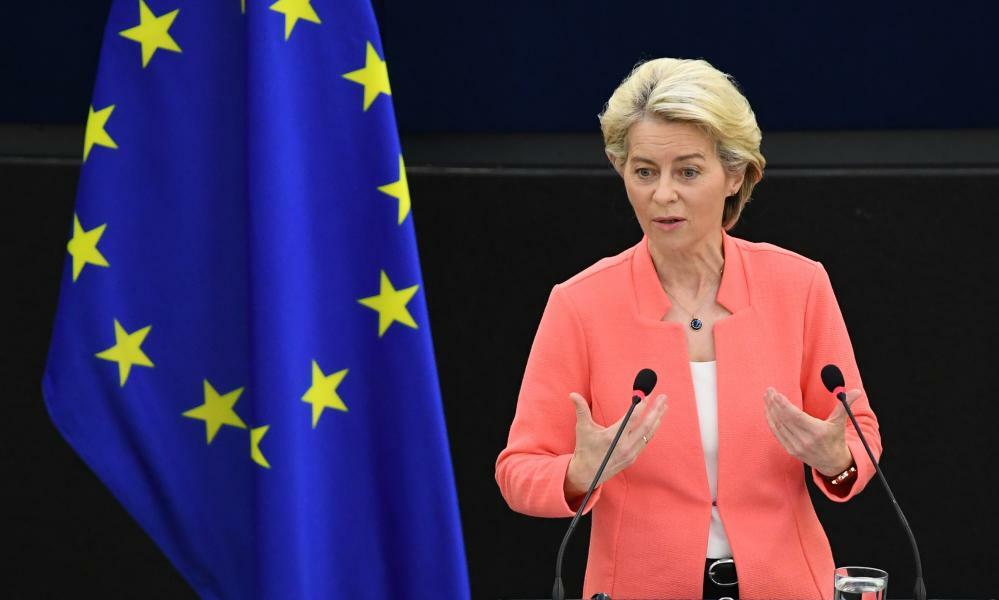 The EU must learn the lessons of the abrupt end of the US-led mission in Afghanistan and acquire the “political will” to build up its own military force to deploy to future crises, the European Commission’s president, Ursula von der Leyen, has said.

In her annual state of the union speech in the European parliament in Strasbourg, Von der Leyen, a former German defence minister, said the withdrawal of the US-led mission in Afghanistan, and the subsequent collapse of President Ashraf Ghani’s administration, raised troubling questions.

“In the last weeks, there have been many discussions on expeditionary forces. On what type and how many we need: battlegroups or EU entry forces,” Von der Leyen said. “This is no doubt part of the debate – and I believe it will be part of the solution.”

But she said there was a more “fundamental” problem in the EU capitals. “You can have the most advanced forces in the world – but if you are never prepared to use them – of what use are they?” she said. “What has held us back until now is not just a shortfall of capacity – it is the lack of political will. And if we develop this political will, there is a lot that we can do at EU level.”

A lack of investment in defence by EU governments and concerns about the risk of undermining Nato, held in particular by the EU’s eastern member states, have been among the main obstacles to establishing a united European military wing. General government expenditure in the EU’s 27 member states on defence stood at 1.2% of GDP in 2019 compared with 3.4% in the US.

Von der Leyen said she was working with the Nato general secretary, Jens Stoltenberg, on issuing a “new declaration” on EU-Nato relations by the end of the year. Six EU member states are not in the military alliance – Austria, Cyprus, Finland, Ireland, Malta and Sweden.

Von der Leyen said there would be crises where the EU’s own military force should operate independently from both the UN and Nato. “On the ground, our soldiers work side-by-side with police officers, lawyers and doctors, with humanitarian workers and human rights defenders, with teachers and engineers,” she said.

The idea of common defence, one attacked by some critics of the EU as evidence of nation building, has a long and tortured history.

Two EU battlegroups of 1,500 troops, which are supposed to be filled on a rotating basis by member states, were established in 2007 but they have never been deployed, in part due to being undermanned.

Beyond mustering the will and capacity to put boots on the ground, Von der Leyen said the EU’s intelligence services and other agencies needed to share information. She also suggested that to build up the EU’s defence sector, and ensure that equipment used by European armies was “interoperable”, VAT could be waived on purchases from local arms dealers.

A leaders’ summit dedicated to European defence will be convened by Von der Leyen and the French president, Emmanuel Macron, in the first half of next year, when France holds the rolling presidency of the EU. “It is time for Europe to step up to the next level,” Von der Leyen said.

While the comments were generally well received in the chamber, , Martin Schirdewan, president of the Left group in the parliament castigated the commission for “calling for more armament and military solutions” rather than directing funding to alleviate the suffering of the poorest. Some EU governments also expressed doubts over the announcements. “Europe is going to address its defence weaknesses by a declaration, a summit, an agency and waiving VAT,” complained one diplomat. “The vision: technocracy embodied.”

The speech was otherwise notably scarce on announcements or eye-catching initiatives, most likely reflecting a desire on the part of the commission president not to become embroiled in German election campaign.

Two European commissioners, Margrethe Vestager from Denmark and Ylva Johansson from Sweden, brought some knitting to do as they listened. The issue of Brexit or the EU’s relationship with the UK, a stock part of such speeches since 2016, was not raised.

The commission president also brushed off critics of the EU’s rollout of vaccines which had initially appeared slow in comparison to that of the US, UK and Israel. “More than 70% of adults in the EU are fully vaccinated,” she said. “We were the only ones to share half of our vaccine production with the rest of the world. We delivered more than 700m doses to the European people, and we delivered more than another 700m doses to the rest of the world, to more than 130 countries. We are the only region in the world to achieve that.”

• This article was amended on 16 September 2021. An earlier version incorrectly spelled Martin Schirdewan as Schwirdeman