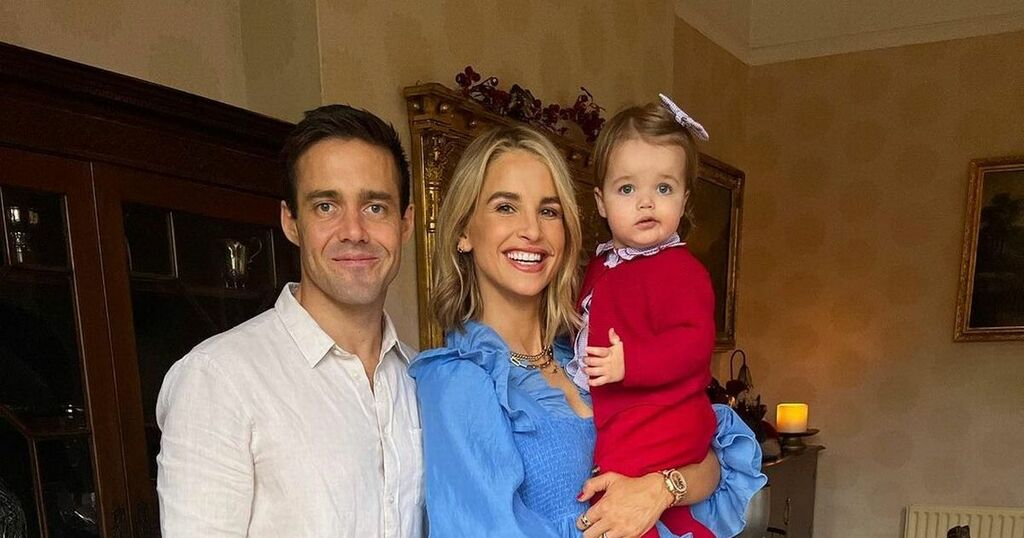 Vogue Williams has showcased her blossoming baby bump as she prepares to welcome her third child with husband Spencer Matthews.

The 36-year-old announced she was expecting again in a gushing Instagram post back October, and Vogue is now due to give birth this spring.

And the blonde beauty has shared a gorgeous glimpse of her ever-growing bump in a sweet Instagram update.

The TV presenter showed off her bump in a pair of black leggings after she completed a gym work out.

Pregnant Vogue captured the snap from above, drawing attention to her stomach.

Alongside the snap, she penned: "Bumping along nicely."

Vogue and husband Spencer are over the moon to be expecting another baby boy, and last month, they shared their exciting gender reveal.

Speaking to HELLO! magazine ahead of their family’s new arrival, Spencer said: “We’re having a little boy!”

While pregnant Vogue added: "My sister asked Theodore if he wants to have a brother or sister and he replied: ‘A brother! I don’t want a sister, I already have a sister.’ So he’s delighted.”

Vogue's latest bump reveal comes after the Irish star recently insisted that she's expecting Spencer to propose for a second time after his awkward first proposal.

The couple first met when they took part in the Channel 4 show The Jump in 2017, and later confirmed their romance after weeks of speculation.

The former Made in Chelsea star got down on bended knee just one year after they began dating, but Spencer’s decision to surprise Vogue with a proposal fell flat.

During an interview with best friend Jamie Laing on their podcast 6 Degrees, the 33-year-old said he’s still embarrassed at the ‘s**t’ proposal, which took place after a performance of The Lion King in 2018.

He joked that it still haunts him to this day, as he recalled asking Vogue to marry him on the stage of the The Lyceum in London’s West End while being watched by some of the cast members.

“I took her to The Lyceum to see The Lion King because it's my favourite Disney film. Not hers – mine. I realised later, this is what I would want to happen to me and not her,” Spencer laughed.

“We went backstage and there was Simba, Mufasa, and Nala and Scar just kind of stood there,” he explained, as he told Jamie he knew instantly it wasn’t going to go well.

“And I was like, ‘Well this is going to be weird isn't it.’ I just kind of dropped to one knee in front of a pride of lions – not real lions, of course, this was the West End – and I proposed to her and I think she was a little bit uncomfortable,” he shared.

Vogue later discussed the details of their proposal during their podcast Spencer & Vogue, and admitted she would like Spencer to try and propose again because she thought his first attempt was selfish.

“I heard Spencer talking about his proposal on his Jamie podcast and I actually went in and felt p***ed off,” she confessed.

“I was like ‘You know what? That was s**t, that was a s**t proposal.’ That might be one of those things... I'd like another proposal that's not s**t and not all about you,” Vogue fired.