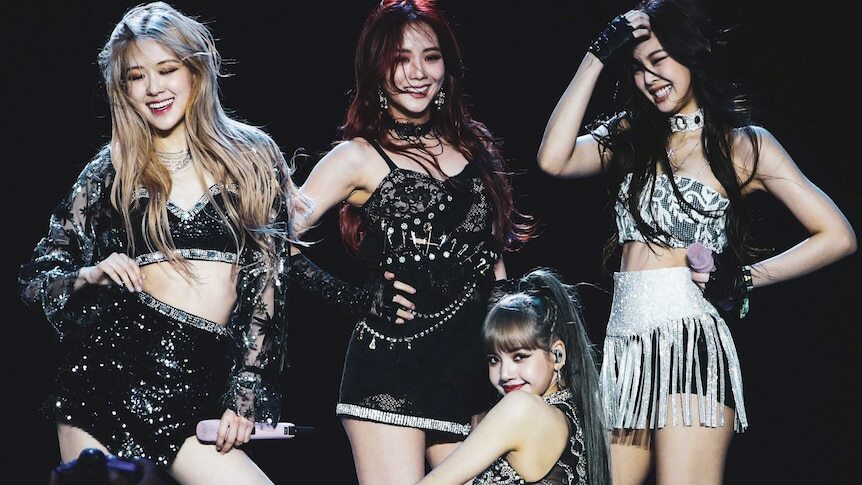 The MTV Video Music Awards — affectionately known as the VMAs — return for another year.

After a socially distanced ceremony last year, 2021 festivities will take place at the Barclay Centre in Brooklyn, hosted by Doja Cat.

As K-Pop continues to break new ground, smash records and win fans across the globe, 2021 is shaping up to be another competitive year in the Best K-Pop category — and a big celebration of the genre's success.

This is the third year of the VMA's dedicated K-Pop Moon Person. The six groups vying for the prize are:

While each nominee brings something different to the table, there's a strong sense that it will likely come down to two groups: Blackpink and BTS.

Blackpink could cap off a huge year

Blackpink formed in 2016. In recent years Rosé, Lisa, Jisoo and Jennie have become household names to pop fans across the globe — with songs in a mix of Korean, English and Japanese.

The girl group's VMAs record stands at six nominations (including two this year) and one win.

In 2020, the group claimed the VMAs Song of Summer — a category decided by the public through a social media vote — with How You Like That.

2021 marks their second year nominated in both the Best K-Pop and Best Group categories.

Blackpink's popularity has continued to soar since their history-making appearance at Coachella in 2019.

Like other K-Pop groups, they've gone on to collaborate with a number of big US stars including Cardi B and Lady Gaga.

The tune currently has more than 625 million views on YouTube.

The fascination with the group expanded even more in late 2020, with the Netflix documentary, Blackpink: Light Up the Sky.

Rosé — who grew up in Australia before heading to South Korea — kicked off her solo career earlier this year, breaking two Guinness World records for her debut single, On The Ground.

And just this week, Lisa branched out with her debut solo single, LALISA.

BTS go from strength to strength

BTS is arguably the most successful K-Pop group to break into the mainstream music awards season.

They go into the 2021 ceremony with seven nominations total; not just best K-Pop, but also Best Pop, Best Choreography, Group of the Year, Song of the Summer (Butter) and Song of the Year (Dynamite).

These last three categories are decided by fan vote through social media — so expect the BTS ARMY to put on a strong showing there.

The tune holds five records in total, including most streams in the first 24 hours on Spotify and most-viewed YouTube music video in 24 hours.

Should BTS win, it'll be three from three for Best K-Pop at the VMAs.

There is some controversy around the K-Pop category

The inaugural Best K-Pop Moon Person was awarded in 2019, a nod to the growing popularity and dominance of the genre, and in particular, groups like BTS.

However, the inclusion of the new category caused quite a stir.

In its maiden year, K-Pop fans, in particular, BTS ARMY, questioned why the group had been nominated in the country-specific category but not in any of the top awards of the evening, despite huge success.

The group's nominated song Boy With Luv had the biggest debut on YouTube in history (at the time) with 74.6 million views.

Map of the Soul: Persona had reached number one on the Billboard 200 album charts, their third album to do so in the same year, matching the record set by The Beatles.

Many of these achievements actually surpassed those of the artists and groups nominated in categories like Video of the Year, Song of the Year and Artist of the Year.

Fans slammed the exclusion as "xenophobic" and soon #VMAsRacist and #VMAsAreOverParty were trending.

In the following year, BTS went on to win all of the four categories it was nominated in, including Best Pop, and delivered a pandemic-safe performance from South Korea.

Whatever happens this year, one thing's certain: K-Pop will continue to deliver for years to come.

Watch the MTV Video Music Awards Monday September 13 at 10:00am AEST on Foxtel, or later on 10 Peach.