The president of Ukraine has used a speech to draw parallels between Russia's invasion of his country and Nazism.

Volodymyr Zelensky described Russia's invasion of Ukraine as "a bloody reconstruction of Nazism" during a video address commemorating the Second World War.

In the video that included archive footage of the Second World War interspersed with black-and-white clips of Russia's invasion, he accused Vladimir Putin's armed forces of replicating Nazi "atrocities".

Standing in front of buildings devastated by Russian shelling, Mr Zelensky said: "We have not withstood even a century. Our 'Never again' lasted for only 77 years.

"We missed the evil. It was reborn. Again and now.

"This is understood by all countries and nations who support Ukraine today. Despite the new mask of the beast, they recognised him.

"Because, unlike some, they remember what our ancestors fought for and against."

He continued: "Evil has returned, in a different uniform, under different slogans, but for the same purpose."

Meanwhile UK Defence Secretary Ben Wallace will say in a speech this morning, ahead of the victory parade in Moscow: “Through their invasion of Ukraine, Putin, his inner circle and generals are now mirroring the fascism and tyranny of 70 years ago, repeating the errors of last century’s totalitarian regimes.

“Their unprovoked and illegal invasion of Ukraine, attacks against innocent citizens and their homes, and the widespread atrocities – including deliberately against women and children – corrupts the memory of past sacrifices and Russia’s once-proud global reputation.”

On February 24, when Russia began its invasion, Moscow claimed that its offensive was partially driven by an attempt to "de-Nazify" Ukraine.

Putin revisited that thread in his own speech congratulating former nations of the Soviet Union 77 years after the defeat of Nazi Germany, declaring that "as in 1945, victory will be ours".

Officials in Ukraine are concerned that Russia will intensify its onslaught to coincide with its Victory Day celebrations on Monday.

Mr Zelensky called for solidarity from European countries, including the UK, France and the Netherlands, by drawing parallels between Nazi bombings of their towns and cities to the shelling of Ukraine's urban areas.

A Russian air strike targeted a school in eastern Ukraine on Saturday. Local officials fear the bombing has left more than 60 people dead.

Approximately 90 villagers from Bilohorivka, near the frontline in the fiercely contested Donbas region, had been sheltering in the building, according to Serhiy Haidai, the governor of Ukraine's Luhansk region. 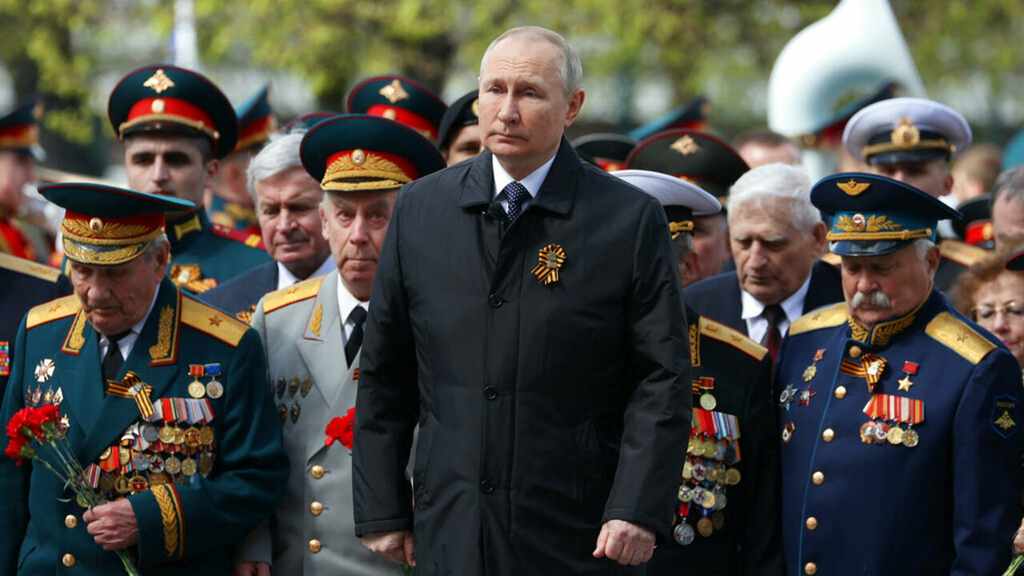 Russian forces have pushed forward in their assault on Ukraine, seeking to capture the crucial southern port city of Mariupol…