Visually impaired students get a taste of the beautiful game 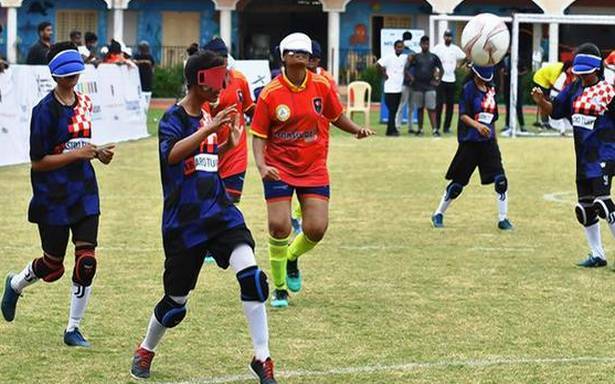 Footballers know that they need to keep their eye on the ball, at all times. But what if they cannot see?

The sound of the ball and goalkeepers and coaches alerting from both ends of the pitch is what the visually-impaired work with on a football field.

A three-day football residential camp organised for visually-impaired participants came to an end with football matches for both boys and girls held between Tamil Nadu and Maharashtra teams.

The residential camp was organised for the first time by the Tamil Nadu Blind Football Association in Montfort School, St. Thomas Mount, near Guindy, and saw more than 80 students participating in it.

P. Chandrasekar, Secretary, National Association for the Blind, said the camp had helped create opportunities to play football for visually impaired children, who usually do not get a chance to play the game.

S. Rajkumar, Vice-President, Tamil Nadu Blind Football Association, said the game of football for visually impaired was played using the multi-pronged audio stimulation called ‘whoy’ (I’m coming) with the players being guided by the clinging sounds arising from the specially-made football and guided by goalkeepers and coaches to attack and defend.

The office-bearers of the Tamil Nadu Blind Football Association, wanted the State government to create sports amenities specially for visually challenged students in all blind schools in the State.