By Guardian staff and agencies 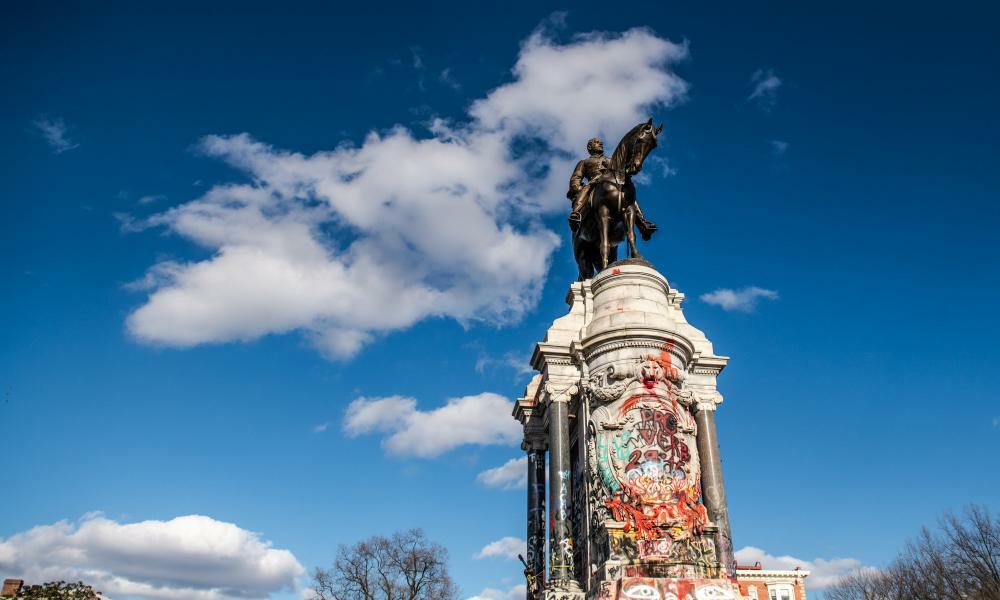 One of the largest Confederate statues still on full public display in the US is to be removed on Wednesday when the authorities take down the towering bronze depiction of General Robert E Lee from Richmond, Virginia, the former capital of the confederacy.

The statue of Lee on a horse tops a huge granite base that is smothered in protest graffiti, and statue and pedestal have previously had images of George Floyd’s face and the letters BLM projected on to them since Floyd’s 2020 murder by a police officer in Minneapolis.

Protective fencing was erected on Tuesday along Monument Avenue in Richmond, where numerous other Confederate statues have already been removed. Only Lee is left, looming from the middle of a major traffic circle. On Wednesday, the bronze statue of man and horse – but not the granite base – will he hauled off.

Lee led Confederate forces during the American civil war as the South attempted to maintain slavery. The statue of Lee will come down 130 years after it was built and more than a year after the Virginia government intended to remove it, delayed by a legal battle between those arguing for its preservation and those criticizing it as a symbol of racial injustice.

Ralph Northam, Virginia’s governor, said: “This is an important step in showing who we are and what we value as a commonwealth.”

Northam had announced plans to take down the statue in June last year, 10 days after George Floyd died under the knee of a Minneapolis police officer, sparking nationwide and international protests against police brutality and racism.

The plans were stalled by two lawsuits filed by residents opposed to its removal, but rulings last week by the state supreme court of Virginia cleared the way for the statue finally to go.

In Richmond, a city that was the capital of the Confederacy for much of the civil war, the city has removed more than a dozen other pieces of Confederate statuary on city land since Floyd’s death.

As one of the largest and most recognizable Confederate statues in the country, the removal of the Lee statute is expected to draw large crowds.

The Northam administration has said it would seek public input on the statue’s future. The 40ft granite pedestal will be left behind for now amid efforts to rethink the design of Monument Avenue.

Some racial justice advocates don’t want that removed, seeing the graffiti-covered pedestal as a symbol of the protest movement that erupted after Floyd’s killing.

Lawrence West, 38, member of BLM RVA (Black Lives Matter Richmond Virginia), an activist group that has been occupying the transformed space at the Lee monument, said he believes the decision to remove the statue was fueled by the work of protesters.

“I mean, it hadn’t come down before. They (Democrats in charge of state government) had all the opportunities in the world.”

Statues of Lee and the Confederate general Stonewall Jackson were removed peacefully from Charlottesville in July, from a park where the far right held a rally in August 2017 that descended into deadly violence against counter-protesters when they marched against neo-Nazis and other extremists.