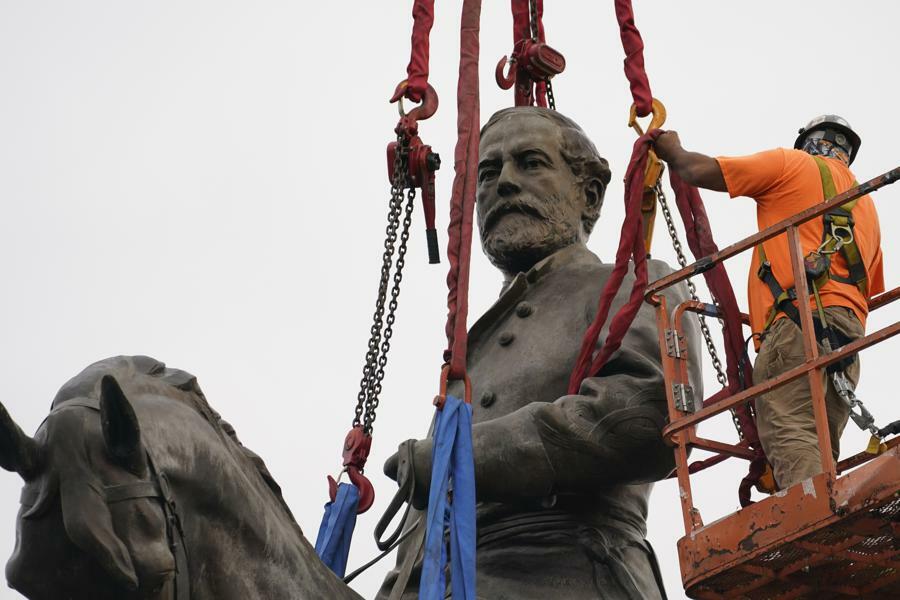 More than 150 years after his surrender effectively ended the American Civil War and paved the way for slavery to be abolished in the U.S., a larger-than-life statue of Confederate general Robert E. Lee was torn down Wednesday morning in the former Confederate capital of Richmond, Virginia.

Shortly before 9 a.m., a large crane hoisted the statue of Lee seated on a horse and slowly lowered it from its pedestal about 40 feet below.

Surrounding streets were shut down Tuesday as protective fencing was set up around the monument’s perimeter in preparation for the statue to be torn down.

Armed guards patrolled the area and late Tuesday night asked people on the scene to leave the monument site.

The Federal Aviation Administration, citing security concerns, temporarily banned drones within a roughly two-miles radius of the statue that went into effect Tuesday morning and will expire just before midnight on Thursday.

Lee’s statue and other Confederate monuments littered across the U.S. came under intense scrutiny last year amid nationwide protests against racism after George Floyd, a Black man, was killed by police in Minneapolis. Nearly 100 Confederate monuments were torn down last year, according to the Southern Poverty Law Center. Critics say the monuments celebrate white supremacy, and point out that many of the Confederate statues standing today were constructed in waves during the early 20th century, first when Jim Crow laws were introduced to disenfranchise Black Americans, and again in the 1950’s and 1960’s amid the civil rights movement.

Virginia officials announced this week the statue of Lee would be torn down Wednesday after the state supreme court unanimously ruled that Virginia had the authority to remove the statue more than a year after Gov. Ralph Northam (D) ordered it taken down. Northam’s move was challenged in court by two lawsuits that argued the governor didn’t have the right to pull down the state-owned statue based on 19th-century state law and a property deed. The 21-foot-tall bronze statue of Lee has presided over Richmond’s Monument Park since it was erected in 1890, about 25 years after Lee surrendered after the Battle of Appomattox Court House, which was fought 76 miles east of west of Richmond.

Virginia Will Take Down Massive Statue Of Robert E. Lee This Week (Forbes)