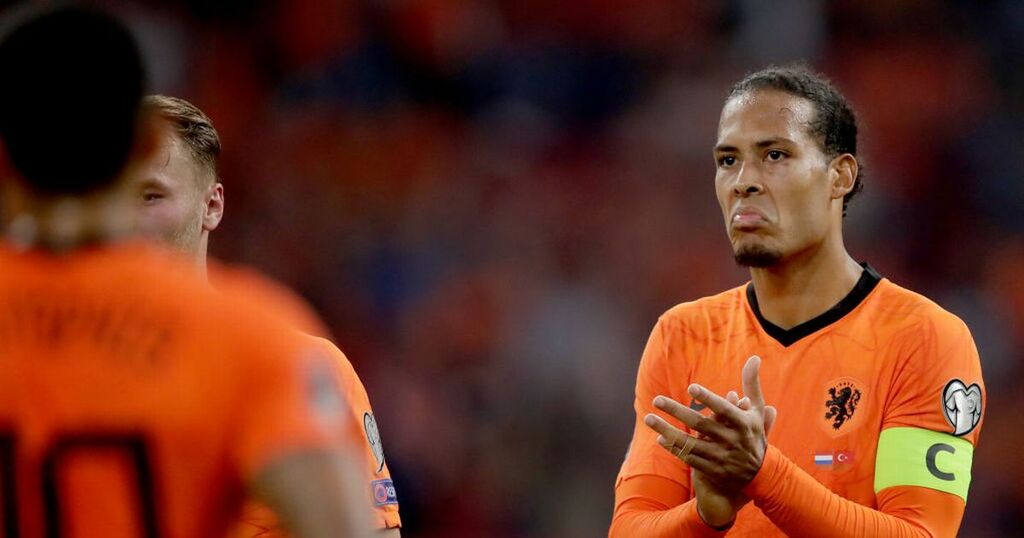 Virgil van Dijk and Ozan Kabak enjoyed a brief reunion before the two went head-to-head when Netherlands took on Turkey in Amsterdam.

Kabak spent the second half of last season on-loan with Liverpool, filling in whilst Van Dijk continued his recovery from the anterior cruciate ligament injury which ended his season.

The defenders never got the opportunity to line up alongside each other for the Reds, after Jurgen Klopp opted to not exercise the clause to make Kabak’s deal permanent.

In total, the 21-year-old made 13 appearances for Liverpool, with injuries hampering his hopes of earning a long-term deal at Anfield.

Van Dijk’s return to fitness, twinned with the arrival of Ibrahima Konate left Kabak as the odd man out, ultimately joining Norwich City on a season-long loan deal.

But despite the fact they never played with each other, Kabak spoke in glowing terms about the talismanic defender he previously described as his ‘footballing idol’.

“Virgil van Dijk is, I think, the best centre-back in the world at the moment,” he said earlier this year.

“The last three or four years he was always on his best performance. He's strong, he's good, he's so fast, he's clever.

“So that's why I see him as an idol. I want to meet with him as soon as possible, to be honest.”

Kabak admitted he was somewhat of a fanboy when it came to the Liverpool centre-half, proudly displaying a shirt signed by him.

He added: “So I had a friend in Galatasaray, Omer Bayram – he's a childhood friend with Virgil van Dijk from Holland.

“I was talking with him and I said something about Virgil van Dijk, he's very good and I like him.

“He said, 'He's my childhood friend.' I couldn't believe it. Then the day after he brought his jersey to me and I was so happy. I put this jersey on my wall in my house. That's the story.”

The two defenders hugged before kick-off, but it was only Van Dijk who enjoyed the evening once the game was underway.

Louis van Gaal’s Netherlands side overwhelmed Kabak and Turkey, thrashing them 6-1 thanks to a hat-trick by Memphis Depay.

The win helped the Dutch leapfrog their opponents and move to the top of their World Cup qualifying group, leading Norway by virtue of goal difference.

Liverpool were handed a scare in the closing stages when Van Dijk went down after trying to intercept an under-hit pass from ‘keeper Justin Bjlow.

After suffering a dislocated finger in the previous match, it will have been a concern to see the defender holding his ankle following the collision.

However, Van Dijk moved to ease any fears that he could miss game-time for the Reds, suggesting there were no lasting effects.

"I’m fine, luckily. I’m already over it," he said. “Maybe because I am so big, they think I am acting.

Asked to clarify, Van Dijk added: "Because when I go down, it goes in quite a slow way."