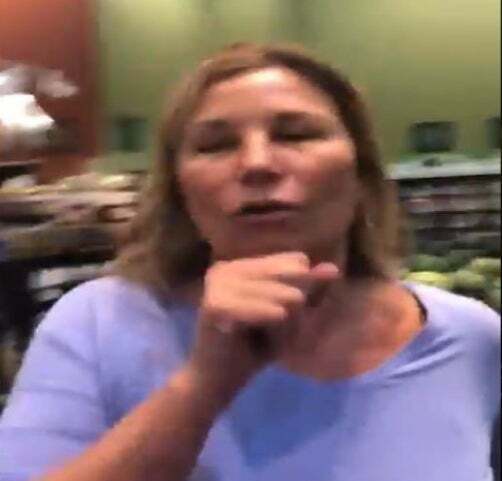 A viral video shows the moment a maskless woman in Nebraska appeared to deliberately cough at shoppers in a supermarket.

The video, which was posted on Twitter, has gained over 2.4 million views and shows the smiling woman laughing and repeatedly coughing in the direction of other customers.

The incident reportedly took place on Friday evening inside a Super Saver in Lincoln. Shoppers in the state are still required to wear masks.

COVID-denier in Nebraska coughs on shoppers at a supermarket pic.twitter.com/Ejy9HfsshS

The unknown woman is filmed saying: “Excuse me, I’m coming through” as she coughs and laughs.

“She’s coughing at me,” someone out of shot then says.

The maskless woman replies: “You’re so cute... Look at you guys. You’re such sheep.”

When asked by a fellow customer why she didn’t have a mask on, the woman responded: “Because I don’t need to have one on, I’m not sick and neither are you.”

Coughing again, she adds: “I have allergies... I started coughing because of my allergies and she freaked out.”

Posting on Reddit, the person who filmed the scene shared her apparent account of what had happened. She said the woman approached her first.

“I was about to say ‘I don’t work here, lady,’ when she asked why we were wearing masks. That’s when I realised that she wasn’t wearing one herself,” the person recalled in a post.

“I started walking away, while replying, ‘Because of the Delta variant, and also because there’s a mandate.’ Then she went on about how she was born and raised here in Nebraska, and it’s too bad that some Nebraskans have turned into sheep.

“She asked if I’ve had a vaccine and said that my kid and I don’t need to wear masks because we look young and healthy. There were several other people around wearing masks but for some reason, she chose to pick on me and my kid,” the Reddit user wrote.

Given the spike in Covid-19 cases due to the Delta variant of the coronavirus, Lancaster County has imposed an indoor mask mandate until the end of September.

The person who filmed the incident alleged that, when an employee at the store intervened, the woman walked away but she followed them around the store.

“I then tried to continue my shopping but this lady followed me around the store. I told her she needs to keep her distance and that her coughing on me was assault. She laughed and kept saying: ‘Look at you, it’s so cute how scared you are,’” she added.