Israeli police fired tear gas and rubber bullets Monday as they tried to disperse crowds of stone-throwing Palestinian demonstrators following the funeral of a young Palestinian man who died from injuries sustained during confrontations with police last month. Dozens of people were reported wounded.

Mourners took Shareef's body for prayers at the Al Aqsa Mosque before proceeding to a cemetery outside the Old City. “With our souls and blood, we will redeem you, martyr,” the crowd chanted. Some people held Palestinian flags.

Israeli police said demonstrators threw stones, sticks and fireworks toward security forces. They released videos showing protesters throwing objects toward police near the cemetery and another video of stones pelting a nearby street.

The police vowed to use a “firm hand” to stop violence that “turned a funeral into an out-of-control demonstration of violence."

Monday's violence came just days after police pushed and beat mourners at the Jerusalem funeral for Shireen Abu Akleh, a well-known Al Jazeera journalist who was killed Wednesday while reporting on an Israeli military raid in the occupied West Bank.

Shareef, 21, was injured during violence April 22 at a contested compound that is home to the Al Aqsa Mosque, the third-holiest site in Islam, and revered by Jews as the Temple Mount, home to the biblical Temples and the holiest site in Judaism. The competing claims to the site lie at the heart of the Israeli-Palestinian conflict.

The compound has been the site of repeated confrontations between Israeli police and Palestinian demonstrators in recent weeks.

Palestinian witnesses and Shareef’s family say he was shot in the head with a rubber bullet, while Israeli authorities have suggested he died from injuries sustained when he fell on the ground. Israeli hospital officials did not give a precise cause of death, and the family refused to conduct an autopsy.

Israel captured east Jerusalem, home to the Old City and its sensitive religious sites, in the 1967 Mideast war. Israel claims all of the city as its capital and annexed east Jerusalem in a move that is not internationally recognized. The Palestinians claim east Jerusalem as the capital of a future independent state. 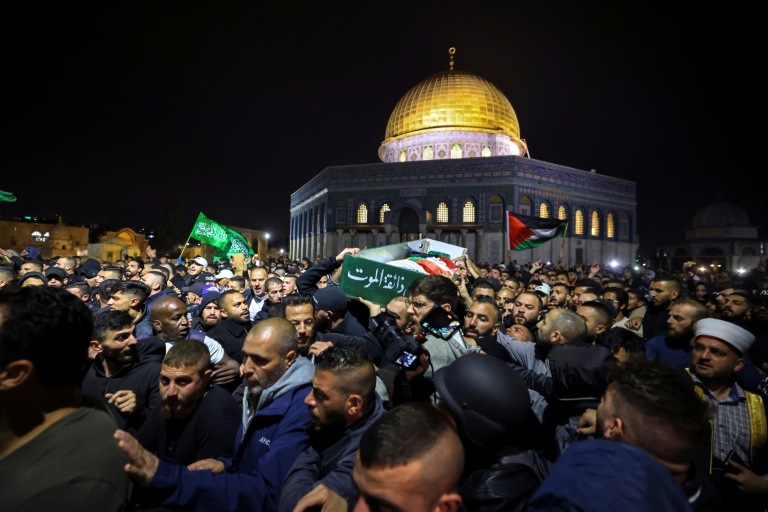 Dozens hurt in clashes at Palestinian funeral in Jerusalem
Jerusalem (AFP) - More than 70 Palestinians were wounded in overnight clashes with Israeli forces at a Jerusalem funeral, Palestinian…