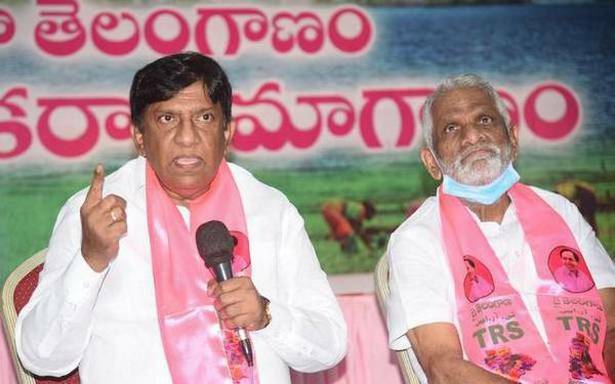 Senior TRS leader and vice-chairman of Planning Board B. Vinod Kumar has asked the Chief Ministers of BJP-ruled States and its Central leaders to come for a debate on welfare in their States compared to Telangana.

Speaking to reporters here on Tuesday, he said that the BJP leaders, who had been visiting Telangana for the last couple of months, were making baseless charges against the TRS government and Chief Minister K. Chandrasekhar Rao. He stated that the development schemes being implemented in Telangana were not found anywhere in the country and they could know about the strides taken by Telangana by consulting the authorities of Central government departments.

He alleged that the BJP was also using its leaders to visit Hyderabad for its political ends and cited that they had spread misinformation that national president of the party J.P. Nadda had come here on the issue of its State president Bandi Sanjay’s arrest, when he was actually here to participate in the Rashtriya Swayamsevak Sangh (RSS) meeting and his visit was scheduled much before Mr. Sanjay was arrested. Mr. Vinod Kumar offered to arrange four helicopters for Chief Ministers of BJP-ruled States to visit any corner of the State and also participate in a debate at Ravindra Bharathi, a cultural events venue, here for arguing over development in their States compared to TS.

Stating that TRS would not keep quiet if ‘misinformation and false charges’ were made by BJP against the State government or the Chief Minister, he termed BJP as anti-people and anti-democratic.

He alleged that the party had exploited voters in the name of constructing Ram temple at Ayodhya but the TRS did not publicise its work of reconstructing the Yadadri temple.