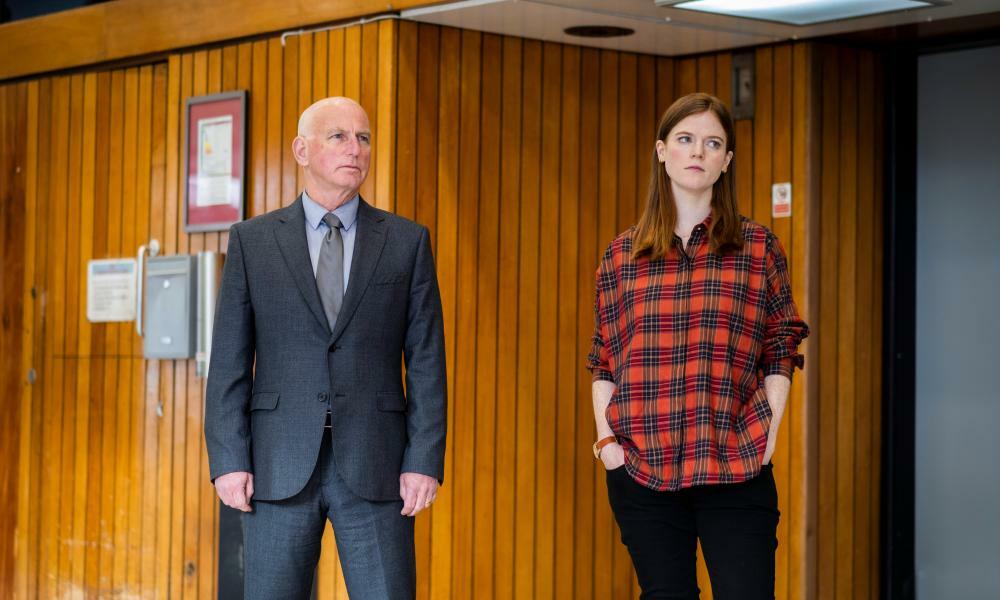 Spoiler alert: this blog is for those watching Vigil on BBC One. Don’t read on unless you have watched episode four.

Russian spies, treacherous crewmen, a sabotaged submarine and another murder. Yes, shipmates, the stakes were cranked up to maximum threat level as the watery whodunnit entered its home stretch. Let’s dive deep into the fourth episode …

This is not a drill. Oh actually, it is

As we re-entered the cramped cabins and mind-your-head metallic corridors of HMS Vigil, it was action stations. Again. Firing orders had been received. When resident nosy parker DCI Amy Silva (Suranne Jones) barged into the control room and tried to intervene in the missile launch, coxswain Elliot Glover (Shaun Evans) grappled the disoriented detective to the ground and told her it was just a drill. Yeah, I totally knew that. Ahem.

Her undignified display was all the excuse that Cmdr Neil Newsome (Paterson Joseph) needed to ask questions about her unravelling mental health and fitness to investigate. He even implied that Silva was suffering psychosis due to antidepressant withdrawal. She was confined to quarters – but not before confronting Glover with her discovery of his illicit affair with medic Lt Tiffany Docherty (Anjli Mohindra).

Murder victim CPO Craig Burke (Martin Compston) had stolen intimate pics from the coxswain’s phone and used them to blackmail him for info about the deaths of two US civilian contractors in Port Havers, Florida. However, Glover and Newsome were clearly in cahoots to undermine and gaslight Silva. They closed rank. We were back to cops v sailors. Stressed-out Silva was rapidly running out of allies.

Back on dry land, DS Kirsten Longacre (Rose Leslie) stubbornly refused to bow to pressure from MI5. She believed they were orchestrating a cover-up of events in Port Havers. Had security services also infiltrated Dunloch peace camp?

Longacre turned the tables, squeezed some intel out of the spooks, and used it to track down the mysterious “guy in a bad Glasgow ice hockey jacket” about whom activist Jade Antoniak (Lauren Lyle) had expressed suspicions. He was identified as Peter Ingles (Sam Redford) and when police tried to arrest him in a Line Of Duty-esque raid, he fled. Kickass Kirsten rugby-tackled him to the ground.

Held on suspicion of drowning Jade, Ingles was coolness personified – despite the stab wound in his shoulder betraying him as the “balaclava man” who had burgled Longacre and been stabbed with scissors for his trouble. It turned out he was really a Russian spy called Piotr Vasiliyev with full diplomatic immunity. They had to let him go, still smirking smugly. Why I oughta …

Happily, tech whiz DS Porter (Reuben Joseph) had a lead. “Ingles” had been exchanging coded messages on an angling messageboard right up until the day before Vigil went out on patrol, when his contact went offline. There was a traitor aboard the sub. Better take this to the top.

In a meeting with navy top brass and MI5, Longacre and Supt Colin Robertson (Gary Lewis) shared their theory that there was a Russian agent on HMS Vigil. Rear Admiral Shaw (Stephen Dillane) initially dismissed all this as “fanciful stuff”. Was Burke the asset? Or was he killed by the asset? Both unlikely – unless he was exposing Russian spies in the navy.

In return, Shaw revealed that the sunk trawler had been dragged down by a US sub. The Americans admitted shadowing Vigil for “operational reasons”. They had intel there was a Russian asset onboard but didn’t know what they were planning.

During a video briefing with the defence secretary (Susannah Doyle, AKA sarky secretary Joy from Drop the Dead Donkey), Longacre explained that the encrypted data Ingles sent to his unknown associate included blueprints of the sub’s ventilation system – specifically the atmosphere management device. Tampering with it could be lethal for the crew.

It was a week before a replacement boat would be ready. The government wouldn’t call Vigil back without proof of an active threat, since it would break the continuous at-sea deterrent. Besides, that could be what the Russians wanted. “I’ll talk to the PM,” said minister Joy before brusquely logging off. (Side note: I bow to nobody in my love of Longacre but would a lowly detective sergeant really sit in on highly classified meetings with Downing Street?)

Flashbacks fleshed out the detectives’ romance

Longacre had met Silva by the office coffee machine. Well, it makes a change from the watercooler or photocopier. The senior officer had helped her protege prep for her inspector’s interview, including the telling advice: “Trust no one. Don’t get emotionally involved. A great detective shuts everything off and focuses on the work at the cost of everything else.”

One thing led to another. Despite Silva’s hesitancy – and insistence that she was straight – they kissed. A tad too much screen time was given to these interludes unless they somehow prove significant. Incidentally, they were drunkenly dancing (and snogging) to Anchor by Welsh multi-instrumentalist Novo Amor. His name is Portuguese for “new love”. Aww.

Come back to port, all is forgiven

As Vigil changed course for the southern shipping lanes to avoid detection, engineer Gary Walsh (Daniel Portman) noticed the control panel padlocks had been picked. He shared his concerns with boss Lt Simon Hadlow (Connor Swindells) that someone could have forced the reactor shutdown. More signs of a saboteur on board?

After a phone call with the minister, Shaw steadied his nerves with whisky (scotch, I trust), then ordered Vigil to return to port. Phew. Just one problem: the sub’s comms system went down after something snagged the wire. It would take hours to fix. “Until then, we’re on our own,” said Newsome grimly. Back on land, the navy got no response. HMS Vigil had gone rogue.

Galley cook Jackie Hamilton (Anita Vettesse) – AKA The Sobbing Chef Who Knows Something – got some good news. Her son was miraculously getting out of prison. “They just let him go,” she said delightedly. He’d been jailed in Indonesia on drugs charges and was one year into a long sentence. Silva’s spidey sense tingled. Why was he suddenly freed?

Sneaking out to search Hamilton’s bunk, she found discoloured bed linen with the same stains as Burke’s fleece. Had she poisoned Burke in exchange for her son’s release? After finding a note in the pocket of her apron and looking seriously scared, Hamilton went missing – or as missing as you can go on a submarine.

Silva later found her dead in the storeroom, covered in vomit, presumably from the toxin. In a shock final frame, a figure in a gas mask – the blue shirt suggested it was Glover – sprinted at Silva, knocking her aside. Were they trying to kill her or save her? Either way, it was the second rugby tackle this week. HMS Twickenham, more like.

We’re still getting regular glimpses of Burke’s replacement CPO Matthew Doward (Lorne MacFadyen) behaving shiftily in the background. Could he be the Russian spy? Was Burke killed in the knowledge that Doward would be flown out to take his place?

Looking even dodgier was coxswain Glover. After Silva confronted him over those bedroom snaps, he paced around anxiously, stroking his lovely beard. Has he got more to hide than an affair? He also appeared rattled when Hamilton was summoned by the skipper. Was it Glover who passed her that secret note? With Vigil scheduled against Endeavour’s return to ITV, this was a busy night for Shaun Evans.

We’re now sailing towards the penultimate episode. See you back here at 10pm next Sunday to blow the whistle on episode five. In the meantime, valued assets, leave your thoughts and theories below …