A video has emerged showing the final moments before a single-engine plane struck an SUV on a bridge in Florida, killing the pilot and injuring the family of three inside the car.

The Cessna 172 plane had lost power when it flew dangerously low above the bridge in Miami on Saturday, the Federal Aviation Administration said in a statement.

The new video showed the plane coming down just a few feet above traffic on the bridge, while a vehicle swerves to avoid it.

The SUV it later crashed into was carrying a 34-year-old woman and her two small children, a six-year-old boy and a two-year-old girl, all of whom escaped with injuries.

The plane crash-landed on the bridge and burst into flames, killing the 36-year-old pilot Narciso Torres, a Miami-based air traffic controller, reported

The plane’s pilot, 36-year-old Narciso Torres who was a Miami-based air traffic controller, died in the accident, reported WPLG News.

Two of Mr Torres’ relatives, who were passengers in the plane, survived the crash. One of them is still receiving care for extensive burns in hospital.

One video had previously shown a man scrambling from the plane and being helped by others to the side just before the fire broke out, reported the Associated Press.

Bystanders had rushed to help the injured after the crash.

The Cessna was bound for Key West after it had departed from Fort Lauderdale-Hollywood International Airport.

Drone footage on social media showed the crumpled plane on the Haulover Inlet Bridge with the damaged SUV nearby.

✕
Moments after plane crashes into SUV near Miami

In a statement, the National Transportation Safety Board said a probe has been ordered into the incident.

“A lot of people were very frightened too but there were a lot of helpers and that was good to see in our community,” Marleen Hernandez, a bystander who was with her family, told CBS Miami. 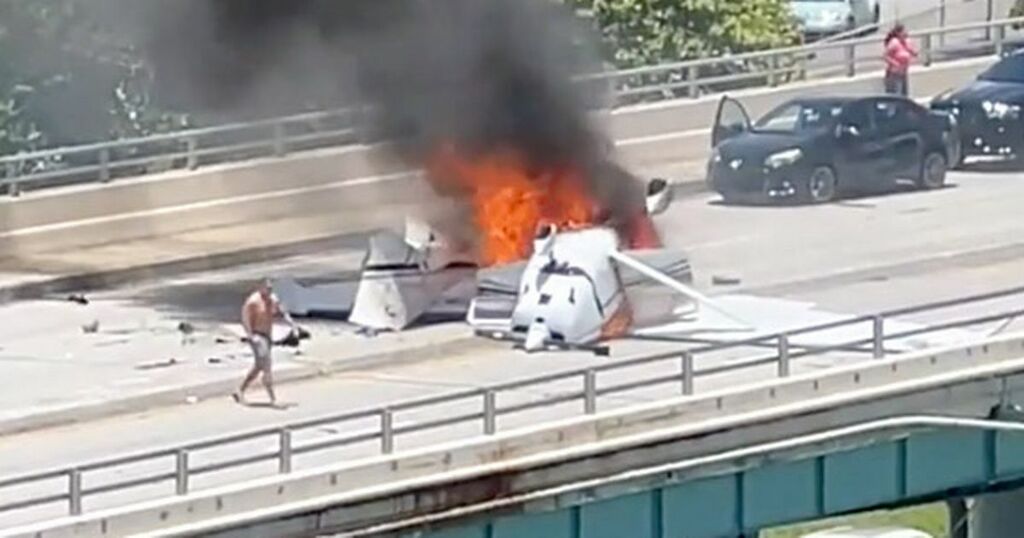 Daily Mirror
One subscription that gives you access to news from hundreds of sites
Florida bridge plane crash killed 1 on board, police say