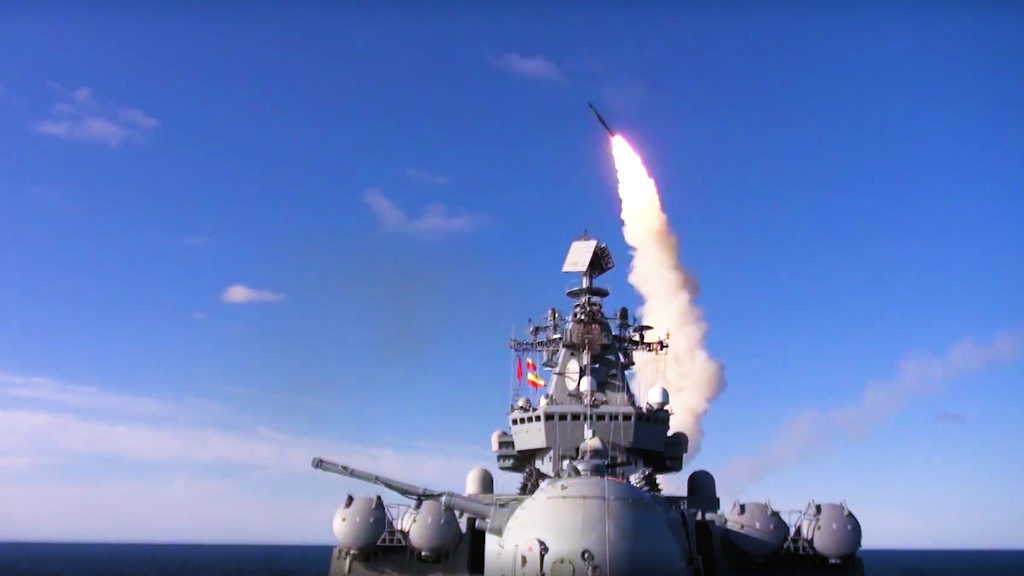 Video shows a Russian Navy vessel firing anti-aircraft missiles in the Sea of Japan in a combat training exercise on Oct. 11.

The video was posted on YouTube by the Russian Ministry of Defense, which captioned it (in Russian): “The Guards missile cruiser Varyag and the large anti-submarine ship Admiral Tributs of the Pacific Fleet conducted missile firing in the Sea of &ZeroWidthSpace;&ZeroWidthSpace;Japan. The launches were carried out at target missiles launched from small missile and small anti-submarine ships. During the exercise, 10 missile launches were carried out.”

The Defense Ministry also issued a statement on its website, saying: “The crews of the flagship of the Pacific Fleet of the Guards Order of Nakhimov, the missile cruiser Varyag and the large anti-submarine ship Admiral Tributs, as part of the final check during the summer training period, conducted a planned air defense exercise of the detachment in the Sea of &ZeroWidthSpace;&ZeroWidthSpace;Japan, during which they performed practical launches of anti-aircraft missiles of the Fort, Dagger and Osa complexes against high-speed air targets.

“The launch of the Malakhit cruise target missile in the interests of the detachment was carried out by the Razliv small missile ship. Saman target missiles launched from the Metel and Iney small anti-submarine ships were also used as air targets.

“In the course of the joint missile firing, the air defense crews of the Varyag cruiser found a cruise missile, took it for escort and destroyed the Fort air defense missile system at a safe distance for the ship. The rest of the targets Varyag and Admiral Tributs hit with the use of SAM Osa and Dagger, as well as naval artillery. In total, within the framework of practical actions, 10 missile launches were carried out.

“The combat exercise was provided by 12 warships and support vessels of the Pacific Fleet. They performed tasks to close the missile firing area.”

The move comes days after the United States and its allies, including the United Kingdom, conducted naval exercises off the Japanese island of Okinawa. Three Western aircraft carrier strike groups and a Japanese helicopter carrier participated. Japan said part of the training took place in its exclusive economic zone.

That move was seen by some as the West sending a message to China, which has been threatening Taiwan.

Taiwan, which considers itself a sovereign nation but which China considers to be a breakaway state, recently protested after China flew dozens of aircraft into Taiwanese airspace. Tensions between the two nations continue to rise.