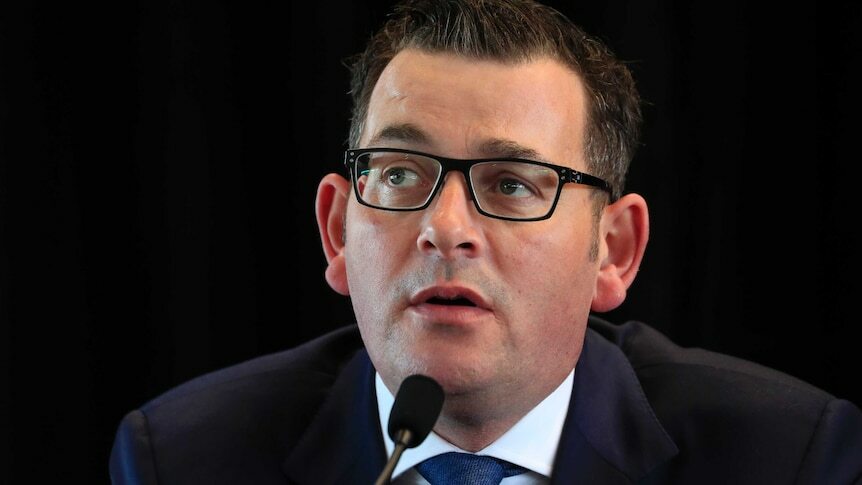 Premier Daniel Andrews has declared he has always followed the Labor Party's rules amid a deepening scandal enveloping the Victorian branch of the ALP.

Federal Labor MP Anthony Byrne dropped a bomb on day one of the anti-corruption probe into the misuse of taxpayer-funded resources, admitting he had engaged in branch stacking, and so had others, including disgraced former minister Adem Somyurek and Luke Donnellan.

Mr Donnellan resigned his Cabinet post on Monday afternoon, admitting he had broken party rules, but not the law.

The Independent Broad-based Anti-corruption Commission is looking at allegations of branch stacking by MPs and taxpayer-funded staff, as well as the misuse of community grants for political purposes.

Under questioning on Tuesday, Mr Byrne said the Socialist Left faction, especially in the south-east of Melbourne, was also engaged in major branch-stacking operations.

Mr Andrews is part of the Socialist Left faction, but he said he had not attended faction meetings for 11 years since he became parliamentary party leader.

Asked if he had ever paid for someone else's membership, Mr Andrews said no.

"I follow the party's rules, and I behave appropriately," he told reporters as he entered Parliament.

In the past, Mr Andrews has been accused of branch stacking by Mr Somyurek, something he has denied.

"I've got a job to do. I dedicate myself to that job, every waking hour."

He would not be drawn on the IBAC hearings or speculate on what else it might find.

"I have a clear expectation of that, that each and every member of my team behaves appropriately and are similarly focused as I am on the people of this great state." Mr Andrews said.

During Tuesday's hearing, Commissioner Robert Redlich QC said IBAC had a role for reform and was looking at historical practices.

"The conduct giving rise to these allegations of corrupt conduct, namely branch stacking is conduct by Mr Byrne's account, and by all of the other material that's available to the commission, has been endemic within the Labor Party for at least the last 20 years, if not longer," Mr Redlich said.

Mr Redlich acknowledged that Mr Byrne's testimony was "against his interest" and commended him.

During cross-examination, Mr Somyurek could be heard whispering to his lawyer Remy van de Wiel QC, which Mr Redlich noticed.

Mr van de Wiel asked Mr Byrne a series of questions about the different ethnic groups the faction tried to recruit, including the Turkish and Vietnamese communities. He accused Mr Byrne of being in control of the Moderate Labor group, not Mr Somyurek.

At Parliament, ministers Jacinta Allan and James Merlino also denied they had ever paid for other people's membership or engaged in branch stacking.

But Environment Minister Lily D'Ambrosio would not answer if she had ever paid for anyone else's membership.

"I'm not going to get into any matters that relate to IBAC," she told reporters.

Trade Minister Martin Pakula said he did not think it was always necessary for people named in IBAC to resign immediately.

'He spat venom at me'

In 2019, Elle Schreiber was seconded from the public service to help set up Mr Somyurek's ministerial office. She became executive assistant and soon found her way into factional politics, while on the public purse, the inquiry heard.

"When the branch stacking, I guess, ramped up the workload was almost like 80 per cent of my day was going through memberships,'' she said.

Staff in the office were often appointed due to their factional credentials.

Asked by Mr Redlich if anyone ever tried to stop factional work during office hours, she replied no.

Ms Schreiber said she would attend party membership meetings for the faction. Mr Somyurek's factional ally Marlene Kairouz's office was next door, and Ms Schreiber said there was daily contact between the offices on factional matters.

After leaving Mr Somyurek's office to go work for Mr Byrne, she said she was offered a job at the CFMEU by Mr Somyurek to work with secretary John Setka as part of a plan to sign up union members to become ALP recruits.

She told the inquiry it would help Mr Setka, who had an image problem with women.

She said Mr Somyurek said the job would come with better pay, access to a car and more "power."

When Ms Schreiber rejected the CFMEU proposal, Mr Somyurek was "mad like a cut snake, he spat venom at me and [said] 'you're a f***ing idiot'."

In her evidence, she also detailed how factional operatives were able to access electoral roll data from the party headquarters.