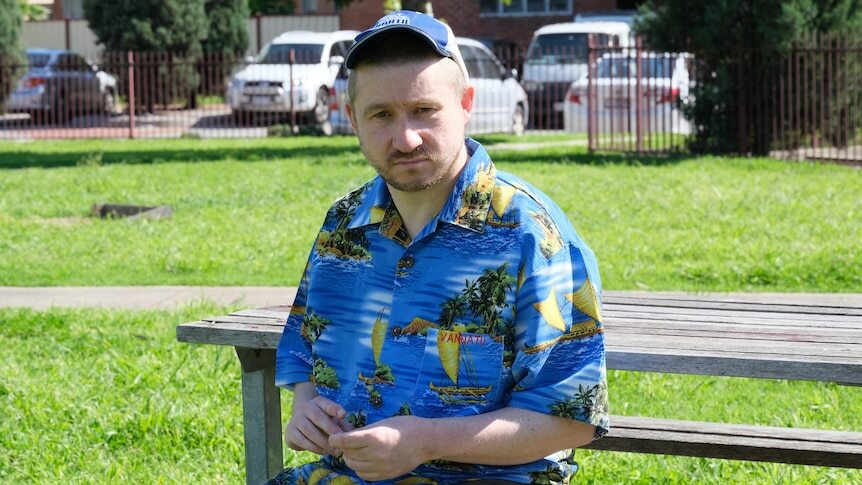 When Victoria opens up later this month, Janine Terry is scared her only son will be locked up at home forever.

For the past five months, the 62-year-old has been desperate trying to get him vaccinated.

Tim, 39, has severe autism, osteoporosis and epilepsy. He is also terrified of needles.

"In May … I asked our family doctor about Tim being vaccinated," Ms Terry said.

"And he couldn't do it and he said I'd be lucky to find someone that would because Tim is so solidly built and he is so terrified of needles he is likely to, not deliberately, but assault someone … to get away."

According to the roadmap out of lockdown, restrictions are set to ease in Melbourne from about October 26 when 70 per cent of Victorians aged 16 and over are expected to be fully vaccinated.

But in its draft report released late September, the disability royal commission described the vaccine rollout as "seriously deficient" and recommended the federal government "ensure people with disability and support workers are fully vaccinated before any easing of restrictions".

Ms Terry said the only way her son could be vaccinated was if someone visited them at home and sedated him.

And that's something she has been unable to organise.

She said she approached a COVID-19 special needs co-ordinator at a major hospital in Melbourne but they were unable to help.

Ms Terry said she had even written to Premier Daniel Andrews and Minister for Health Martin Foley, urging them to find a solution.

No vaccine will mean being locked up at home

Ms Terry said with Victoria increasingly looking towards a vaccinated economy, she feared her son would be prevented from living his life.

She said without being vaccinated, Tim would not be able to go to his adult training centre, respite or out for dinner.

She said they were both "mad North Melbourne supporters", but he wouldn't be able to go to the football with her.

"Can you imagine being home with a severely autistic child for the rest of your life? That's what it will come down to."

The ABC has spoken to others battling the same situation, including a family in Sydney who are unable to get their 13-year-old vaccinated despite trying four times because no-one will agree to either restrain or sedate the child.

On Thursday, Victorian Minister for Disability, Ageing and Carers Luke Donnellan announced $5 million to boost vaccination rates among people living with a disability.

Mr Donnellan said the government was unhappy with the rates of vaccinations among people with disabilities and more had to be done.

However, experts say the most vulnerable cohort within the disability community is being left behind.

The Victorian Advocacy League for Individuals with Disability (VALID) chief executive, Stephanie Gotlib, said the Victorian health department was aware of a group of about 100 vulnerable people with disability who had been waiting from as early as July to get vaccinated.

Ms Gotlib said while she welcomed the government's announcement of additional funding, the most vulnerable people needed to be the priority.

"When we look at the UK figures around deaths of people due to COVID, 60 per cent of them are people with disability," she said.

Ms Gotlib said for some the barrier was consent, but for others it was about being able to access the health system.

She said though she didn't have a legal background, issues of consent should not be a barrier to people with an intellectual disability getting the COVID-19 vaccine.

"There's many people with intellectual disabilities that can make an informed decision," Ms Gotlib said.

"And then there's another group, arguably the most vulnerable people with disabilities, who need a lot of specific additional supports and accommodations to be able to receive the vaccination."

Consent is not an issue for Ms Terry who has an enduring power of attorney.

"I am able to make … health decisions for Tim," she said.

"God forbid, if he needs to have life support turned off, I can make that decision. I hope it never happens but I can also make a decision on whether he can have sedation to get an injection."

'When he saw the needle, he ran away'

Getting their son vaccinated was also an uphill battle for Aaron and Lisa, who did not want their identity revealed.

The couple had been trying to get their adult son with autism and intellectual disability to get vaccinated since May.

Aaron said they tried four times, including by taking him to a hospital, with no success.

"When he saw the needle, he ran away," Aaron said.

This week the couple managed to get a nurse to come their home and administer the vaccine.

"The nurses came, they had the gown and the mask and the PPE, and so he ran into the house," Aaron said.

Beth Johnson, who is a research fellow at Monash University's Turner Institute for Brain and Mental Health, said people who had autism could experience difficulty being in unfamiliar environments or being touched.

"It's not surprising that when it comes to large medical rollouts like this vaccine scheme, that people with … a range of disabilities can be put to the back," Dr Johnson said.

"It is a complex issue and it needs a sensitive approach.

"It is really good to create awareness about the kinds of issues that are barriers to people with disability accessing vaccines."

A spokesperson for Victoria's health department said while the Commonwealth was responsible for rolling out vaccines to people with disability, the state government had stepped in to play a significant role helping those people and their carers get vaccinated.

The spokesperson said Victoria's Disability Liaison Officers, who acted as vaccination case managers, had helped 6,000 people with a disability get vaccinated by arranging in-home vaccination, group bookings, advice, or other forms of support.

As the wait goes on, Ms Terry fears her son may get COVID-19 and, worse, may not be able to communicate his symptoms to her.

"Back in 2018 … he tripped on his adult training centre bus and broke his ankle in two places and didn't cry," Ms Terry said.