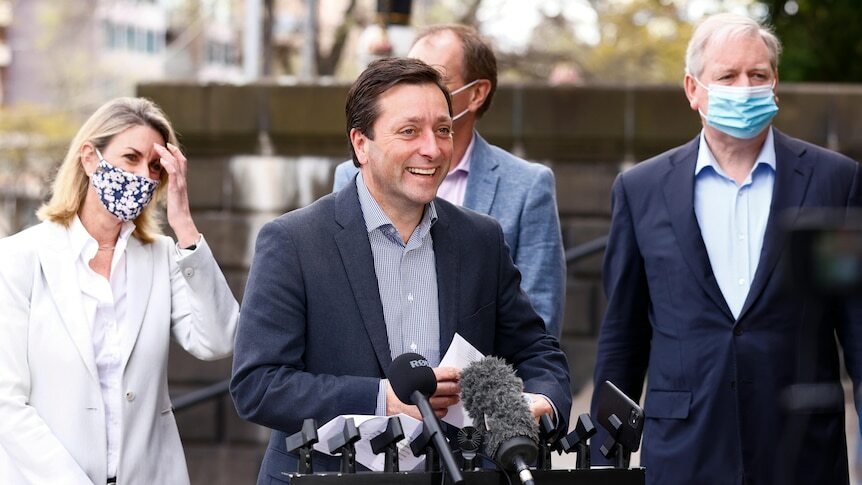 Mr Guy toppled Michael O'Brien on Tuesday and returns to the role three years after leading the Liberal party to a dramatic defeat in the 2018 election.

He said the Coalition would be focused on "listening to people".

"It's about revitalising our state, it's about an emphasis on recovery, not just a pandemic," he said.

Supporters of Mr Guy have been elevated, including MP Tim Smith, who will become Shadow Attorney-General.

Mr Smith, who does not come from a legal background, replaces Ed O'Donohue, who had already confirmed he would not contest the next election.

Brad Battin, who failed to bring on a spill against Mr O'Brien in March, will hold the shadow emergency services portfolio.

Mr Battin's backers in the March leadership move return to the shadow front bench, with Ryan Smith to be Shadow Planning and Housing Minister and Nick Wakeling holding the shadow industrial relations and trade portfolios.

Ryan Smith will also take on the new role of Shadow Minister for Suburban Recovery.

"Melbourne, which is certainly the gateway to Victoria, which was once the world's most livable city has now become the most locked-down and leave-able city," he said.

Matt Bach, who already had the roles of child protection, early childhood, higher education, training and skills, will take on a newly created role dedicated to students struggling because of the pandemic.

Shadow Health Minister Georgie Crozier retained her role in the reshuffle and reiterated the opposition's frequent refrain that Premier Daniel Andrews had no plan to take the state out of lockdown.

The Victorian Liberal Party's youngest-serving MP Brad Roswell will not be included in the new-look opposition front bench.

He is one of several MPs who supported Mr O'Brien who have been omitted from the reshuffle.

Mr Guy dismissed suggestions his picks were based on who voted for a spill during the week.

"I mean, there's people in the right jobs."

Only 23 per cent of MPs in the Victorian Liberal Party are women.

When asked about female representation in the party on Friday, Mr Guy told ABC Radio Melbourne he would bring back a "women to win" program to boost the number of women.