The Victorian government's transformed frontbench has officially been sworn in, as the dust continues to settle on the news four senior ministers would step down and depart politics.

The major changes in the party's leadership come months out from a November state election, where the Victorian Labor Party will vie for a third term in power.

Mr Brooks's portfolio will include child protection as well as disability and ageing, Ms Kilkenny will look after corrections and youth justice, Ms Blandthorn will be responsible for planning, Mr Dimopoulos will manage tourism, sport and creative industries, and Ms Shing's portfolio will cover water, regional development and equality.

Ms Kilkenny was unable to be sworn in due to being in COVID-19 isolation. That will now happen at a later date.

Existing ministers who have received a substantial boost to their responsibilities under the reshuffle include new Health Minister Mary-Anne Thomas, Natalie Hutchins, who will take on the education and women portfolios, and Danny Pearson, who will add housing to his responsibilities.

Ms Allan said she was "humbled and proud" to take on her new role after being voted in on Saturday.

She said the fresh cabinet line-up would strengthen the government ahead of the election.

"I was supported unanimously by my colleagues," she told ABC Central Victoria's Breakfast radio program.

"I was the only candidate for the vacancy. But this is also about putting forward a really strong team."

She said being one of the first women and also people from regional Victoria in the deputy premier position was "not lost" on her.

There are now 14 women ministers in Victoria.

Shadow Health Minister Georgie Crozier pointed out that with Ms Thomas taking on health, there had been four health ministers within four years.

The four outgoing ministers join a string of senior Labor MPs who have stepped down since the 2018 election, including Jill Hennessy, Jenny Mikakos, Adem Somyurek and Marlene Kairouz.

Among those new to ministerial responsibilities is Mr Brooks, who was elected as the member for Bundoora in 2006 and who has been the Speaker of the Legislative Assembly since March 2017.

Before entering politics through local government, he worked as an electrician in the 80s and 90s.

Mr Brooks's maiden speech to parliament revealed his father's experience with disability and his mother's role in caring for him had helped shape his political beliefs.

Ms Shing was a lawyer before she was elected to the upper house for Eastern Victoria at the 2014 election.

After being sworn in, she said she wanted to continue to make sure "equality is not negotiable" in Victoria.

Mr Dimopoulos has represented Oakleigh since 2014. Prior to his election, he ran a cafe and served as councillor and mayor in local government.

Ms Shing and Mr Dimopoulos are among the first openly gay ministers to serve in Victoria, which he reflected upon after being sworn in.

"There are so many gay men and women that I am sure have served in Victorian and national cabinets, but not in a way that they could be open," Mr Dimopoulos said.

"I'm feeling a little bit nostalgic for so many others in the past that didn't get the openness, transparency and the choice because their government and society at the time wasn't progressive.

Ms Blandthorn, elected as MP for Pascoe Vale in 2014, chairs the Public Accounts and Estimates Committee.

She has a lengthy union background, dating back to her university days when she was elected president of the Melbourne University Student Union in 1999.

Ms Kilkenny worked as a lawyer before she was elected as the MP for Carrum in 2014, and she has since worked as parliamentary secretary in the early childhood education and health positions.

Beneficiaries of 2020 reshuffle continue their rise

Mr Pearson, the MP for Essendon, has continued his ascent within Labor Party ranks, being appointed the Coordinating Minister for the Department of Families, Fairness and Housing.

The former political adviser received his first ministerial roles following a June 2020 cabinet shake-up, which saw the ousting of Mr Somyurek along with allies Robin Scott and Ms Kairouz in the wake of the branch-stacking scandal.

Mr Pearson took over the job of Assistant Treasurer from Mr Scott, in addition to serving as Minister for Regulatory Reform, Government Services and Creative Industries.

He first entered parliament at the 2014 election.

She worked as a union official and a small business owner before entering politics, and served as a minister in portfolios such as industrial relations, Aboriginal affairs and family violence prevention after the 2014 election.

Ms Hutchins resigned from the frontbench in 2018 following the death of her husband.

She has been appointed the Coordinating Minister for the Department of Education and Training.

Niddrie MP Mr Carroll will also expand his responsibilities, having served as Minister for Public Transport, Roads and Road Safety since the 2020 reshuffle.

Mr Carroll will become the Coordinating Minister for the Department of Jobs, Precincts and Regions.

The former lawyer and ministerial adviser was elected to parliament in 2012. 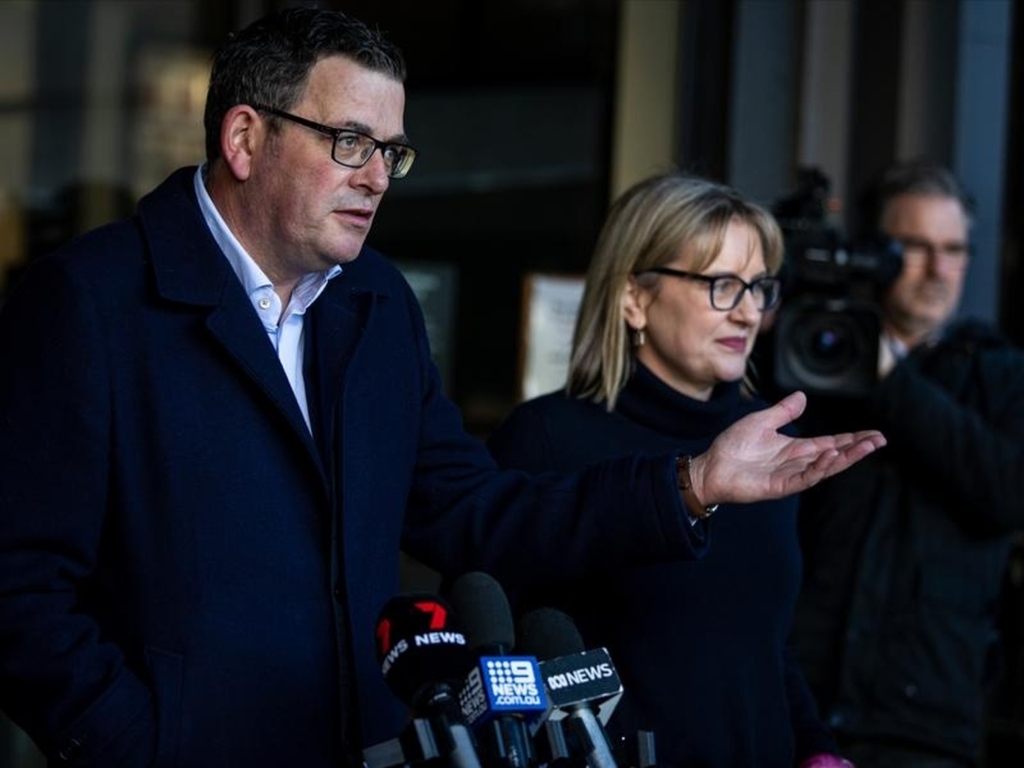 Andrews sells 'depth' in new Vic cabinet
Stepping out with his incoming health minister, Premier Daniel Andrews has spruiked the "depth" of Labor's replacements for a raft…