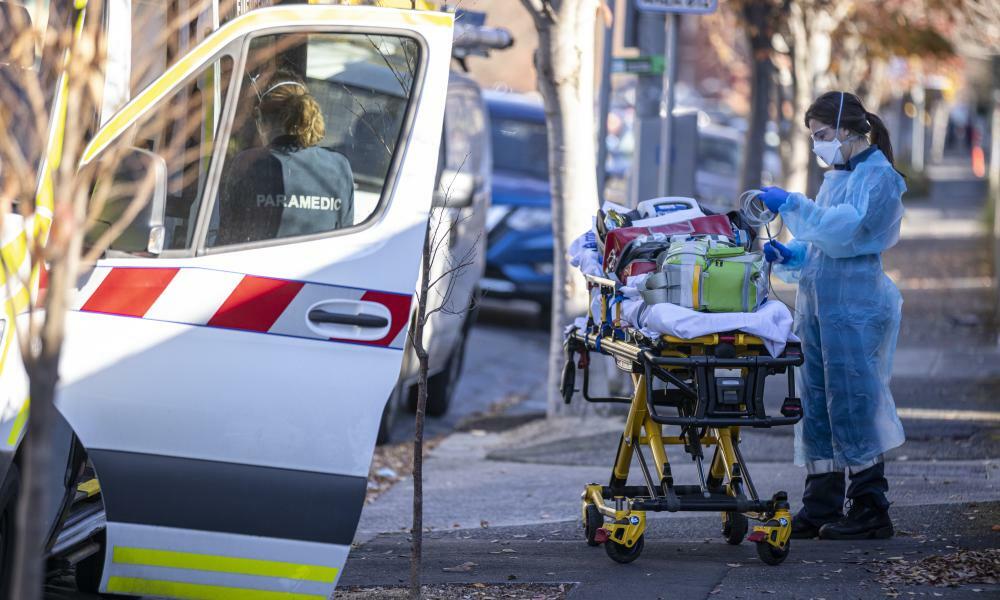 The Victorian premier, Daniel Andrews, has been fined $400 for twice not wearing a mask outside parliament in Melbourne, as the state reported a record 1,838 local Covid cases and five further deaths.

Andrews on Friday apologised for breaching the state’s mask mandate on Wednesday and Thursday morning as he walked across a car park to address journalists.

On both days, the premier wore a mask as he was driven to parliament but took it off before he walked through the car park.

“Victoria police can confirm it has issued two infringement notices to premier Daniel Andrews for breaching chief health officer directions,” a police spokesperson said. “Premier Andrews received two fines today for not wearing a mask, each to the value of $200.”

All Victorians over the age of 12 must wear a mask when leaving their home – both indoors and outdoors.

Journalists and politicians are permitted to take them off while working, in order to answer questions or broadcast news segments.

Before the fines were issued, Andrews apologised for not wearing a mask, saying it was an “oversight” and promising to donate the same amount of money if he wasn’t fined. “While this was an oversight, oversights matter, everyone needs to follow the rules and I am sorry it occurred,” he said.

Victoria on Friday reported the highest daily Covid case number in any state or territory. At the same time, it was revealed the Andrews government had been forced to water down its vaccination mandate for workers.

The vaccination directions were changed to exclude commonwealth employees or people who worked in connection with court proceedings from being listed as workers required to be fully vaccinated.

The Victorian treasurer, Tim Pallas, said it had become “increasingly apparent” there were limitations when it came to mandating vaccinations among the cohort, which includes state MPs.

“There is a separation of powers issue that goes to the courts and parliament but … we are working on mechanisms to make sure that every member of parliament complies with the same requirements that the public is expected to comply with through the mandate,” he said.

The controversial mandate was announced by the government and was intended to cover more than 1 million authorised workers.

The increasing strain on the health sector has led to Australian Defence Force personnel being deployed next week to drive ambulances and triage tents being erected outside Melbourne hospitals.

In a state first, two paramedics will no longer be deployed to every ambulance in a bid to relieve pressures on the strained hospital system. Instead, a paramedic will be joined by a driver from the ADF, St John Ambulance Australia, State Emergency Service or a student paramedic, the Age newspaper reported on Friday.

The state’s chief health officer, Prof Brett Sutton, warned Victorians to brace for higher case numbers and deaths in the coming days and weeks, but expected the peak was “close”.

“We’re not going up at the same rate as we were in previous weeks and I think that’s a good sign,” he said.

“We are heading to the peak, if today isn’t the peak, and I don’t think it is, but I think we’re close. Today is a record number, but it is important to reflect on the fact that our ICU admissions for the number of active cases is two-thirds of 1%.”

“As first doses and second doses rise, the protection rises, and that has led to not just the flattening of the curve but the dropping of numbers,” he said.

On Friday evening, chief health officer, Prof Brett Sutton, announced the regional town of Mildura would go into lockdown for seven days from midnight on Friday, after 12 cases had been detected.

The current rules for Melbourne apply to Mildura, but there will be no curfew.

The regional towns of Shepparton and Moorabool will come out of lockdown from midnight on Friday.

The Victorian health department also announced people would be allowed to remove their masks to consume alcohol outdoors from midnight Friday, and students attending school in year 3 and above will be required to wear masks indoors. It was also strongly recommended for children from prep to year 2.

Epidemiologist Nancy Baxter said she expected case numbers in Victoria to be “much higher” than NSW when 70% double vaccination dose targets were met.

“Our hospital system will be under considerable strain – so additional cases particularly in those unvaccinated will add to an already overloaded healthcare system,” she said.

“I am concerned that Victoria will not be able to contain hospitalisations and deaths even with the restrictions in place – our numbers are increasing and the strain is being seen in the healthcare system.

“Although we are making plans at 70% there are still at-risk groups who are not at that rate of vaccination, including Aboriginal communities and people with disabilities. These people who are at greater risk of developing severe Covid will be unprotected.”

The number of critically ill Covid-19 patients requiring hospitalisation in Victoria has continued to surge. There were 620 people hospitalised on Friday, including 114 people in intensive care and 76 requiring ventilation.

Those being treated in hospital included a Covid-19 positive police officer. A second police officer had recently tested positive but did not require hospitalisation.

It wasn’t known where they acquired the virus, but one of the two officers who tested positive worked at a recent Melbourne CBD protest, the Police Association of Victoria confirmed.