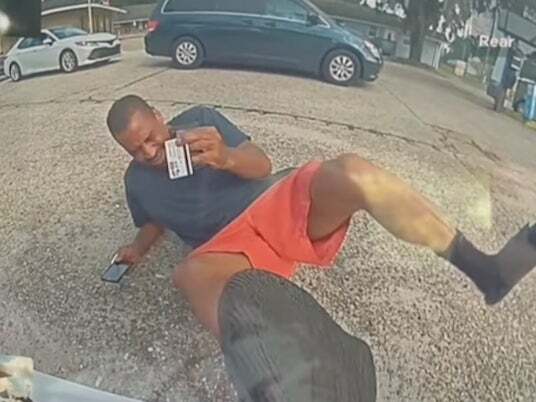 A man in Louisiana who claimed to have been the victim of a hit and run by a Tesla was arrested after the car’s camera showed he fabricated the situation.

Slidell, Louisiana police said they were summoned to a local gas station by a guy who said he had been hit by a car and claimed that the driver fled the scene.

Arthur Bates Jr., 47, the man in question, complained of back, neck and leg injuries and told officers that the Tesla had rammed into him as he crossed the gas station forecourt.

Bates might have managed to get away with his effort to stage the incident if he had chosen a different car to target. Unfortunately for him, Tesla vehicles are fitted with rear cameras, and the business backs up the footage recorded by the vehicles.

So, once police investigators had located the driver, he promptly showed them the film, which depicts the brazen scam.

According to a video captured by the Tesla’s rear camera and shared on Facebook by the Slidell Police Department, Bates edged up to the back of the Tesla, then lay down behind it and pretended to have been hit and injured,

Before driving away, the driver is seen getting out of his car and appears to briefly chat with the man.

When questioned, Bates admitted to faking the entire incident, and he was arrested on Friday, September 3, for fabricating a police report, according to police.

Underneath the video shared on the police Facebook page, people said they were glad cameras were present to see the moment unfold, but lamented the fact that first responders had to deal with the incident.

"What a waste of time and resources. Our first responders [have] been working so hard this past week, and they have to respond to this!! Shame on him," someone wrote.

"I love how the guy knocked his foot off the bumper of the car! Like man, get off my car!!" another added, joking about the Tesla owner seemingly pushing the man’s foot away.

Someone else believed that the situation should be a new way to sell the brand and wrote: "Tesla needs to use that as another selling point. Fraud protection."

A futuristic Mercedes allows people to use brainpower