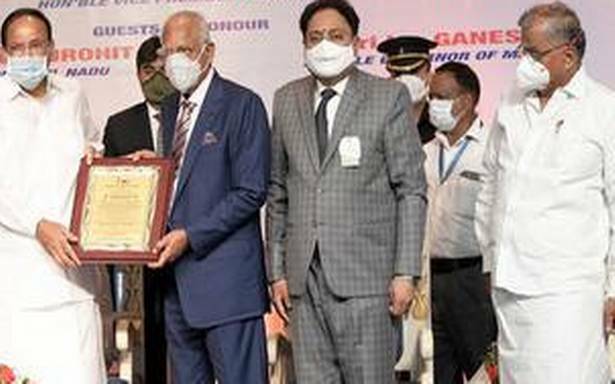 Vice-President M. Venkaiah Naidu on Saturday said that he endorsed the view of Chief Minister M.K. Stalin that Indian history must be rewritten. “In fact, it has to be rewritten with an Indian perspective and not through a colonial lens,” he said.

Mr. Naidu was speaking at the platinum jubilee of the Hindustan Chamber of Commerce in Chennai on Saturday.

The Vice-President said the carbon dating of some excavations had thrown fresh light on the ancientness of the Thamirabarani civilisation, revealing that it was 3,200 years old, and the influence of Tamil Indian culture could be seen at the Angkor Wat temple in Cambodia, which was built in the early 12th century, according to a press release.

On Thursday, Mr. Stalin told the State Assembly that carbon dating analysis of rice with soil, found in a burial urn at Sivakalai in Thoothukudi district, by the Miami-based Beta Analytic Testing Laboratory had yielded the date of 1155 BC. “It is the government’s task to scientifically prove that the history of the Indian subcontinent should begin from the Tamil landscape,” Mr. Stalin said. The Vice-President spoke about the importance of vaccination against COVID-19 and following of safety protocols to ensure that the economy bounced back. “Thanks to a series of timely measures and policy reforms initiated by the government, the economic situation has been improving gradually,” he said.

He spoke of the need for the Centre and State governments to work in a “Team India” spirit and the importance of public-private-partnerships in different sectors to propel economic growth. Mr. Naidu urged the chamber to facilitate skill development among the youth, lauded it for its achievements and released a souvenir on the occasion. He presented the ‘Champion of Humanity’ award to Prathap C. Reddy, founder-chairman, Apollo Hospitals.

Governor Banwarilal Purohit was the guest of honour.