Venice’s mayor has blamed climate change for its highest tide in over 50 years, which flooded St Mark’s Square and many of the ancient city’s alleyways.

“The situation is dramatic,” Luigi Brugnaro tweeted. “We ask the government to help us. The cost will be high. This is the result of climate change.”

Warning of severe damage, he said he would ask the government to declare a state of emergency to allow funds to be freed for repairs.

The high-water mark hit 187cm (74in) late on Tuesday, meaning more than 85 per cent of the canal city was submerged. The highest level ever recorded was 198cm (78in) during infamous flooding in 1966.

One person died after he was struck by lightning while using an electric water pump on Pellestrina, one of the many islands in the Venetian lagoon, the fire brigade said. Another death was later reported on the island, but the cause is unclear.

St Mark’s Square was left submerged under more than one metre (3.3ft) of water, while St Mark’s Basilica was flooded for the sixth time in 1,200 years.

Four of those inundations have come within the last 20 years, most recently in October 2018.

Others showed deep waters flowing like a river along one of Venice’s main thoroughfares, while another showed large waves hammering boats moored alongside the Doge’s Palace and surging over the stone pavements.

The tide level had fallen to 145cm ​by Wednesday morning, but it was expected to rise back to 160cm during the day.

Even lower levels of the salty water have taken their toll on the city over the years, eroding the foundations of homes and businesses.

Mr Brugnaro called for the speedy completion of a long-delayed project to construct off-shore barriers.

Called “Moses”, the moveable under-sea barriers are meant to limit flooding of the city, caused by southerly winds that push the tide into Venice.

But the controversial project, opposed by environmentalists concerned about damaging the delicate lagoon ecosystem, has been delayed by cost overruns and corruption scandals, with no completion date in sight. 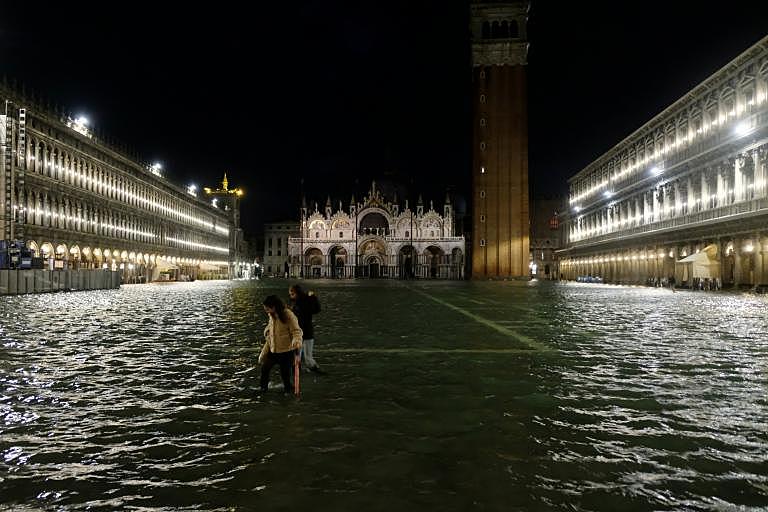 The Independent UK
One subscription that gives you access to news from hundreds of sites
Climate change, corruption blamed for Venice flood devastation