Venetians rage at flood-defence delay: 'They don’t think of us'

By Angela Giuffrida in Venice

“We don’t know when we will reopen. Thank you, Mose!” reads the sign pinned to the door of Pasticceria Rizzardini, a small bakery and coffee shop in the San Polo area of Venice.

Established in 1742, the shop has survived many floods; a faded list of the highest records is etched by the door. But Monday night’s deluge, the worst since 1966, and the subsequent acqua alta, or high tide, on Wednesday and Thursday have severely damaged the premises. Another high tide, estimated at 1.45 metres, is forecast for Friday.

Politicians blame the floods on climate change, but Marta Garlato, whose family have owned Rizzardini since the early 1980s, and other Venetians also point to human error. Many are enraged about the authorities’ failure to complete the €6bn (£5.1bn) Mose project – a series of floodgates designed in 1984 to protect the city from high tides but still not in operation.

“There’s a lot of damage and people are feeling very angry and also very worried,” Garlato said. “Things could have been done to limit situations like this – there have been potential solutions that were never even considered. Evidently, they don’t really think of us.”

The prime minister, Giuseppe Conte, said during a visit to Venice on Wednesday night that the flooding was “a blow to the heart of our country” and promised to declare a state of emergency, paving the way for the government to provide financial aid for repairs and assist those whose businesses and homes had been damaged. “Our commitment to Venice is total,” he said.

But his words have done little to alleviate the rage of those affected. Much of the attention so far has been on the damage to Venice’s prized monuments. Water engulfed St Mark’s Basilica, flooding its crypt and breaking windows. It is unclear how much the destruction will cost to fix, but when water filled the 1,000-year-old cathedral in November 2018 the repairs were estimated at €2.2m.

The opera house, the Teatro La Fenice, was also affected and a short circuit caused a fire at Ca’ Pesaro museum. On the island of Murano, the mosaic floors of the cathedral were seriously damaged.

At the same time hundreds of ground-floor homes, which in Venice are cheaper to buy or rent than those on the floors above, were flooded.

The water that engulfed the home of Dubravko Garbin and his girlfriend, Elena Riu, late on Monday night, cutting off the electricity and destroying about €4,000 worth of belongings, came from the swollen canal outside but also through the toilet, shower and bidet.

“The water was literally full of shit,” said Garbin. “I even had to scoop poo out of the fridge because water entered after its door fell open.”

The couple only moved into the rented accommodation in Dorsoduro in August and did not have insurance for their furniture and belongings because they said the premium for ground-floor homes was too high.

“There are so many things we are angry about,” Garbin said. “The first thing is that they got the high tide prediction so wrong – all day they kept saying it would be 1.45 metres, and so we were well prepared for that, but in the end it was 1.87 metres. If the forecast had been correct we would have saved everything.”

But they were mostly livid about the Mose project, arguing that the work done on the project so far had exacerbated the flooding, as had the excavation of canals to accommodate cruise ships.

Work on the flood barrier began in 2003 but has been dogged by delays and issues including a corruption scandal that emerged in 2014, in which more than 30 people were arrested in an investigation into a €25m slush fund amassed by the consortium building the barriers to bribe officials.

The latest estimated completion date is 2021. On Thursday the mayor, Luigi Brugnaro, and the transport minister, Paola De Micheli, gave assurances that the job would finally be finished.

As part of the project, an artificial island was built between Venice Lido and Cavallino-Treporti to separate two rows of barrier gates and to house the main technical buildings for the operation of the gates. Riu said the island had changed the lagoon and allowed seawater to enter more quickly.

“The lagoon needs to be returned to the way it used to be as it worked perfectly well for thousands of years,” she said. “Now it’s completely destroyed. I cannot think about what it will be like in 10 years or even less, as we can see so much change happening already.”

Fabio Bagarotto, whose nearby gift shop was damaged in the floods, said: “All the tax money that has been spent on Mose and it’s not even finished. Politicians don’t care about ordinary people.”

As residents assessed the implications of the floods, tourists were enjoying the novelty. There were some wading through a flooded St Mark’s Square on Thursday morning and posing for selfies in front of the basilica.

One visitor said she had chosen to come in November on the off-chance that she would experience the famous high tides. Some spoke about how their hotels had filled with water, causing blackouts, but for the most part they had been getting on with their trips.

Chloe Dutton and Josh Parry, first-time visitors from Liverpool lifting their suitcase through St Mark’s Square after arriving on Thursday afternoon, said one of the first things that had caught their eye was a rat floating in the water. But it hadn’t put them off. “I think the water makes the city even more magical,” said Parry. 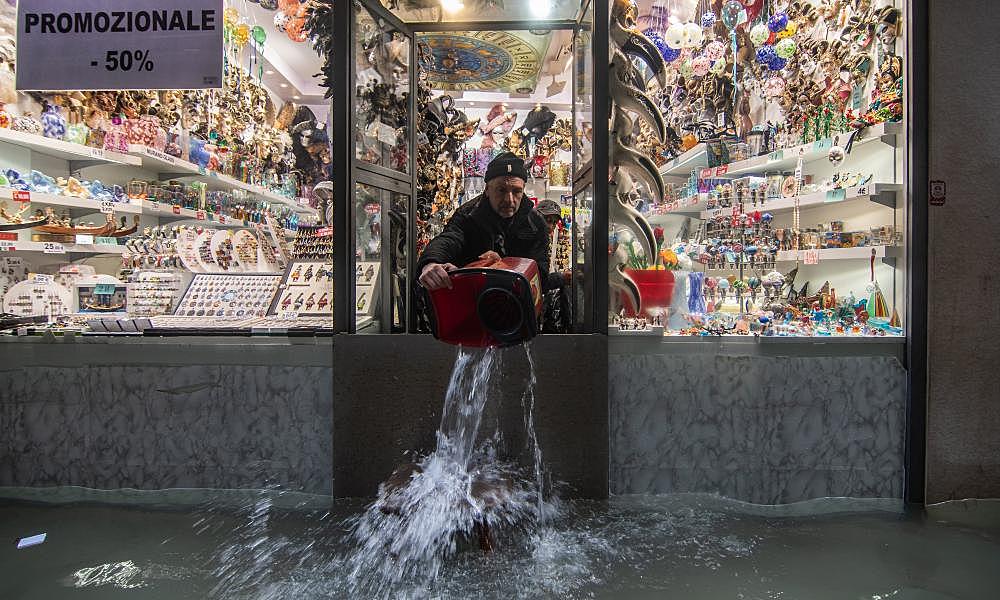 'An apocalypse happened': Venice counts cost of devastating floods
Businesses and residents say they feel helpless as they brace for next high tides