By Peter Beaumont in Lviv
KyivRussiaUkrainemiles

In the satellite image, the trees of the forest just north of the Ukrainian village of Rudnya-Shpylivska – population 107 – appear as if you could brush them with your hand.

Before last week, this hamlet was almost too small to notice, a place that cars would speed past on the P02 highway, those trees a blur.

Dead centre of the picture, circulated by the satellite company Maxar Technologies on Sunday, a small clearing is visible, and next to it, on the road heading south towards the Ukrainian capital, Kyiv, a small proportion of a vast convoy of Russian military vehicles – estimated to be 40 miles long – accompanied by 15,000 troops.

In places, the military vehicles can be seen three abreast, almost blocking the road. Other images of the convoy seem to explain its belligerent purpose: fuel tankers and trucks carrying food, ammunition and soldiers.

Elsewhere, just visible are the shapes of towed and self-propelled artillery pieces, BMP3 armoured carriers and Russian main tanks. In places you can see the tracks of Russian vehicles that have gone off the road – perhaps to scout against attack from the flanks – visible in the fresh snow covering the fields.

Indications of smoke from burning buildings off the road, although not on it, backed up by thermal imaging data from Nasa’s global fire tracking service, suggest, perhaps, outgoing fire from vehicles in the convoy towards Ukrainian positions.

And in some images released by Maxar on Monday, troops appeared to have arrived at where they would halt, deploying in camps outside the city, including in and around the town of Zdvyzhivka, to the north of Kyiv.

All have been assembled for what western intelligence agencies and analysts believe is an imminent attempt to close Russia’s military encirclement of Kyiv and put the city under siege in its latest attempt to topple Ukraine’s government and install a Kremlin-friendly regime.

The presence of the convoy, growing and intact, prompts several conclusions as things stand. Despite its scale and the way it has blocked the road for miles, it appears largely unmolested. This suggests Ukraine’s air force is no longer sufficiently intact to target it in a meaningful way and that Ukraine has not been able to bring drones, used successfully elsewhere, to hit it.

On Tuesday the head of the convoy was reportedly passing near the heavily contested Hostomel airbase 17 miles north of Kyiv’s city centre. There are fears that the force in the convoy could be deployed against the nearby district of Obolonskyi, the adjacent village of Horenka, and the main roads running through Obolonskyi towards the city’s centre.

There is mounting, urgent concern among western officials that Russian forces are planning to employ siege tactics against Kyiv, cutting off supplies and routes in and out, before moving in.

Already, faced with the threat of the buildup barely an hour away, some of those residents of Kyiv not attempting to leave have been digging trenches and setting up barricades to repel the expected assault.

The possibility of a siege leading to rapidly rising civilian casualties has been raised by senior Biden administration officials. “It’s likely going to be very significant loss of life,” said the congresswoman Victoria Spartz, who was born and raised in Ukraine.

As a picture emerges of how a full-scale Russian ground assault on Kyiv could begin, Russia’s Tass and RIA news agencies quoted the Russian defence ministry as saying it planned to strike the headquarters of Ukraine’s security service and special operations unit, allegedly to prevent “information attacks” on Russia. The ministry urged people near the sites to leave the areas.

If those strikes go ahead, they are likely to be followed by a stepping up of artillery and missile strikes across the city before a possible armoured incursion.

As Russia masses forces on three sides of Kyiv, in a sign of the battle to come, Ukraine’s president, Volodymyr Zelenskiy, said defending the capital was a priority. “If we defend Kyiv, we defend the country,” he said in a video message released on Telegram. “Kyiv is the heart of our country, and it must beat. And it will fight for its life to win.” 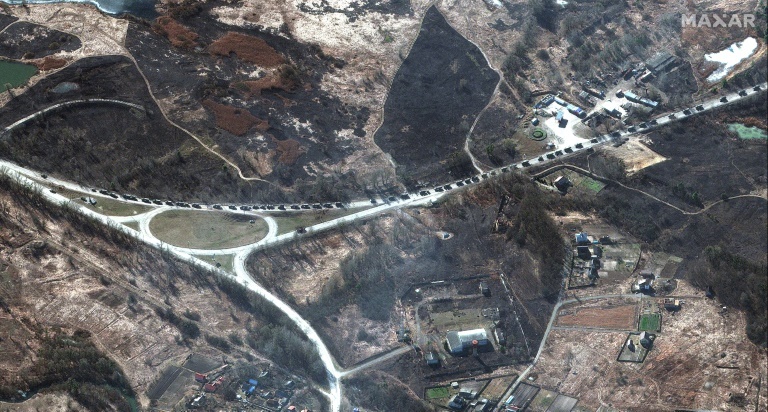 On Monday, a 64-kilometre-long convoy of Russian tanks and armoured vehicles was spotted via satellite on a road to Ukraine's…

Boris Johnson is visiting Poland and Estonia in a show of support for Nato’s eastern members.