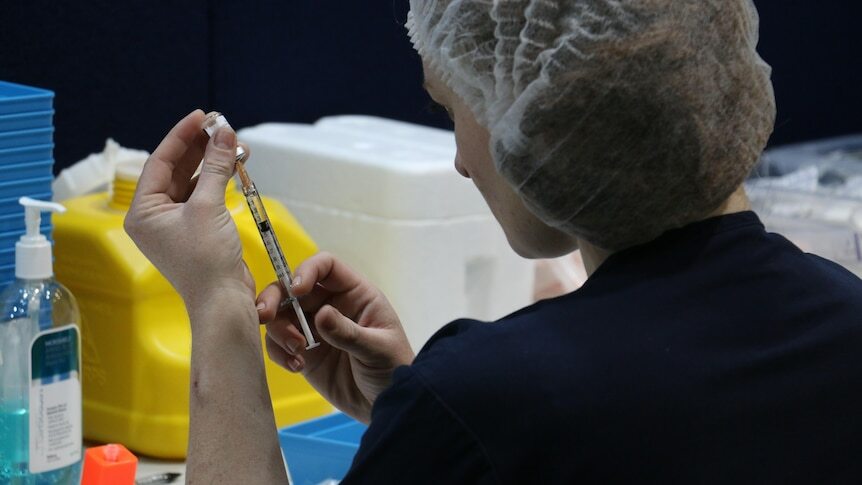 West Australians could require COVID-19 vaccine passports to go to football matches, concerts and fly interstate and overseas by late this year.

"It will be either late this year or sometime earlier next year, [I] can't put a precise date on it, where we will have those measures in place," WA Premier Mark McGowan said.

"But first of all, we have to give everyone the opportunity to get vaccinated first."

He said the type of activities the WA government was looking at stopping unvaccinated people attending included concerts and football games.

Interstate and overseas flights may also be off limits to the unvaccinated.

"We haven't made a final decision on that at this point in time," the Premier said.

Mr McGowan said it had been suggested that only vaccinated fans be allowed to attend the upcoming AFL grand final in Perth.

He said he could not do that, because not everyone has had access to the vaccine.

Pfizer open to children 12 and over

Meanwhile, children aged between 12 and 15 became eligible to book a COVID-19 vaccination appointment on Monday, but authorities are still working on the best way to vaccinate them.

"We're encouraging school students to get vaccinated, but the vaccine commander, Chris Dawson, is looking at what to do," Mr McGowan said.

He said the "first and foremost thing" that could be done was for parents to take their children to get vaccinated.

In a statement, WA Health said it was "not yet" running COVID-19 vaccine clinics in schools.

"Further planning is underway to determine the best way to reach young Western Australians aged 12 and above to provide access to COVID-19 vaccinations," the statement read.

It follows a push from the WA government on Sunday to get year 11 and 12 students vaccinated as quickly as possible by potentially arranging special time slots for those students to get priority access at state-run clinics.

The Health Department said further details would be announced soon.

Mr McGowan said the vaccination rate for 12 to 15-year-olds would be published separately to that for those 16 and over.

He said that was to ensure fair comparisons could be made between the states and territories.

Mr McGowan said in "due course" younger West Australians would be added to the state's overall vaccination rate, which he wants to see reach above 80 per cent before setting a date to ease border restrictions with states that have COVID-19 in the community.

Year 11 student Ella Giddings was already booked in to receive her first dose at the Claremont Showgrounds clinic on Monday, but her mother Jacquie Baker is keen to get the rest of the family fully vaccinated.

It won't be long until her 14-year-old daughter is booked in too.

"We're pretty keen as a family to get double vaccinated," Ms Baker said.

"We've talked to the kids a lot about being part of history and how fantastic it is that everything's happened so quickly.

"They understand, I think, the importance of protecting the community and themselves."

More than 2 million COVID-19 vaccines have now been administered in WA, with 39 per cent of the state's population aged 16 and over fully vaccinated.

More than 57 per cent of people have received at least one shot.