Vaccination certificates a ticket to safe audiences at events in Japan 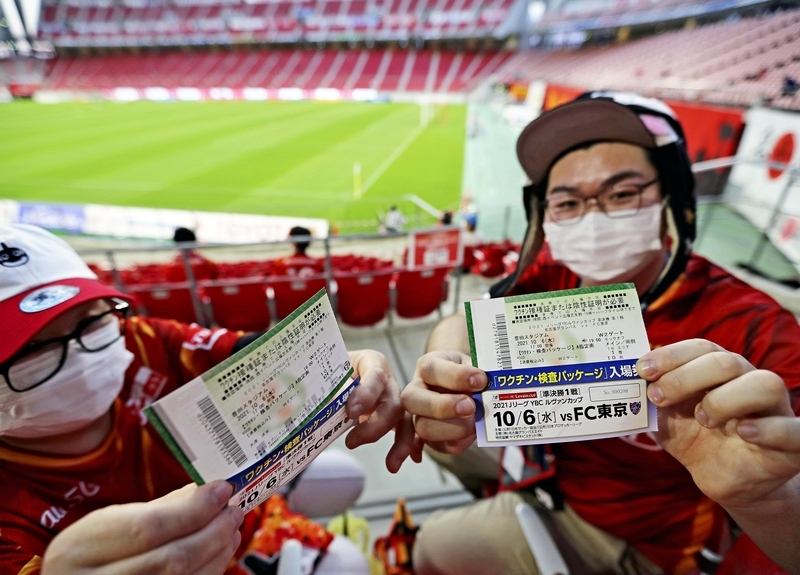 The J.League kicked off the first large-scale trial of a government initiative to allow stadiums to admit more fans at the first leg of the YBC Levain Cup semifinal between Nagoya Grampus and F.C. Tokyo at Toyota Stadium in Aichi Prefecture on Wednesday.

The government's so-called vaccine and test package is designed to ease restrictions for people with COVID-19 vaccination certificates or proof of a negative virus test.

The government is using the trials to assess the initiative's effectiveness in mitigating the spread of coronavirus infections.

There were no major hiccups during Wednesday's trial event but some of the spectators had received their second vaccination less than two weeks before the match.

Toyota Stadium can accommodate about 40,000 spectators but attendance is capped at 10,000 under the current COVID-19 restrictions.

For the trial, the stadium prepared an additional 1,800 tickets for spectators who either had proof of vaccination or had received a negative result in a PCR test within the last three days, and 730 of those tickets were sold.

Fans who presented a copy or smartphone photo of relevant documents to staff members along with a piece of identification such as a driver's license received a special pass that gave them access to an area of the stadium that was separated from other spectators.

Spectators were asked to wear masks and refrain from chanting or cheering and their actions were monitored by staff and cameras equipped with artificial intelligence. The spectators were also given surveys with questions about the level of enjoyment and their physical condition to be completed over several days after the event.

"I felt safe because people around us had all been vaccinated or tested negative," said a spectator from Nakatsugawa, Gifu Prefecture, who watched the game with her 69-year-old mother. "I hope this trial is the first step back to normality."

The J.League plans to hold trials at several first-division matches and will prepare an additional 10,000 seats under the government initiative for the Levain Cup final in Saitama Stadium on Oct. 30.

"Providing a sense of security will become one of the services we offer," J.League Chairman Mitsuru Murai said. "I hope these efforts become a model for the dining industry and events in other fields, not just sports."

The additional 5,000 seats that were made available for the soccer World Cup Asian Qualifier match between Japan and Australia on Oct. 12 at Saitama Stadium have already sold out.

Professional baseball teams will allocate between 2,000 and 5,000 seats for trials at some games from mid-October and for the Climax Series and Japan Series in November.

Gymnastics and rhythmic gymnastics world championships scheduled from Oct. 18 in Kitakyushu will be held with full-capacity crowds.

Similar trials are planned at restaurants and live music venues in 13 prefectures.

The central government wants business operators to check customers' vaccination certificates or proof of a negative virus test under the vaccine and test package. However, some operators are reluctant to treat customers differently, leading some municipalities to make adjustments to their pandemic measures.

Restaurants in Saitama prefecture are still being asked to close early even though the state of emergency has ended. The local government plans to lift the restrictions on Oct. 24.

It has proposed the introduction of zoning at eateries to separate customers with and without certificates, and permitting certificate-holding diners to stay until later. A government official said, "We wonder if any businesses will raise their hands to cooperate after the restriction ends."

The Aichi prefectural government plans to conduct trials at event venues and live music clubs. In response to calls from event organizers to expand the scope of admissions, the local government is studying the possibility of conducting antigen tests at or near venues but is struggling to secure medical staff and appropriate facilities.

"We hope to start the trials by the end of the year, but it will take time to make adjustments [to the plan]," a prefectural government official said.