US strengthens Asia-Pacific defences with floating helicopter base 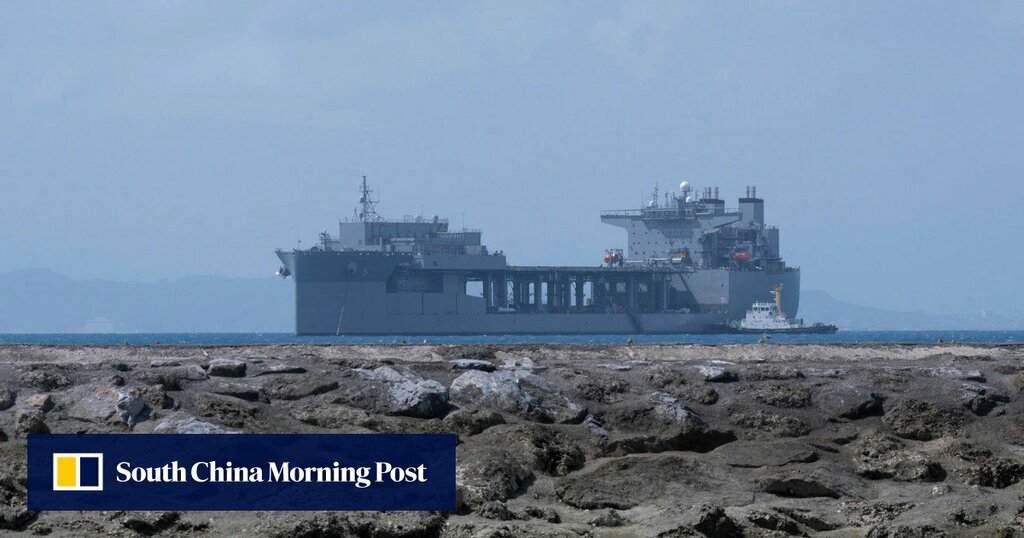 The United States navy is strengthening its defences in the Asia-Pacific amid ongoing tensions with China by deploying its newest giant landing dock to Okinawa.

The USS Miguel Keith, an expeditionary staging base designed to transport large quantities of equipment and serve as a floating base for helicopters and hovercraft, was deployed to the White Beach naval base on the Japanese island on Friday, the US Navy said in a statement.

The Lewis B Puller-class vessel has a length of 240 metres (787 feet) and can provide logistical support for naval operations.

Macau-based military observer Antony Wong Tong said its presence further reinforces the American defences along the first island chain, a line of Pacific islands stretching from Japan to the Malay Peninsula, including Taiwan.

The chain plays an important role in US strategic thinking for the region and Chinese forces will have to pass through it to access the wider Pacific.

“The Okinawa-based USS Miguel Keith will be used as a de facto aircraft carrier platform for US amphibious forces, which would help the US stop the People’s Liberation Army from attempting to seize Diaoyu Islands,” Wong said, referring to the Japan-controlled islands also known as the Senkakus that both China and Japan claim.

The new deployment came as naval forces of the US, Japan, Australia and India started a joint exercise under the Quad framework on Tuesday.

The three-day Malabar exercise from Tuesday until Thursday in the Bay of Bengal involved the US aircraft carrier Carl Vinson, two Japanese escort vessels, an Australian frigate and an Indian destroyer, according to the Japanese maritime self-defence force.

Last week the Carl Vinson joined two other carriers, the USS Ronald Reagan and Britain’s HMS Queen Elizabeth, along with ships from four other countries for an exercise in the South China Sea.

Lu Li-Shih, a former instructor at Taiwan’s Naval Academy in Kaohsiung, said the deployment of the Miguel Keith and the recent joint naval drills were intended to remind China that the US could muster stronger forces.

“The PLA is expected to have put its third aircraft carrier … into service as early as 2030,” Lu said.

“But the US showed they could mobilise at least three aircraft carrier strike groups and other warships in a drill, a clear message to the PLA that ‘I can defeat you just now’.”

In a response to the increasing number of foreign warships conducting freedom of navigation operations in the South China Sea, the PLA recently held a drill in the waters that practised air-to-ship strike bombings and offensive mine laying, according to state broadcaster China Central Television.

Collin Koh, a maritime security analyst at Singapore’s S Rajaratnam School of International Studies, said the PLA had been upgrading its fighter jets and air-to-ship weapons, adding that the Miguel Keith and other similar warships have “limited self defence capability against high performance threats”.

Koh added “there’s also a new threat” in the shape of the J-16D electronic combat jet, which recently made its public debut at the Zhuhai air show.

The fighter can jam enemy air defence and radar systems and is only the second of kind after the US EA-18G Growler, although Koh said its “exact performance isn’t known”.