The US Senate on Wednesday acquitted President Donald Trump of abuse of power and obstruction of Congress charges following an historic two-week impeachment trial in the upper house.

The Republican-majority Senate acquitted Trump on both articles of impeachment. For the first charge, abuse of power, they voted 52-48 "not guilty".

Utah Senator Mitt Romney was the only Republican to break ranks, voting "guilty" on the first charge, siding with the Senate's 45 Democrats and two independents. However, he voted "not guilty" on the second charge, obstruction of Congress.

"Corrupting an election to keep one's self in office is perhaps the most abusive and destructive violation of one's oath of office that I can imagine," Romney said in an emotional speech on the Senate floor.

The "abuse of power" charge refers to allegations that Trump pressured Ukraine to investigate his Democratic rival Joe Biden, in what House Democrats said was a quid pro quo for personal political gain.

Senators voted 53-47 to acquit Trump on the second article, obstruction of Congress. That charge alleges that Trump blocked witnesses and documents sought by the Democratic-majority House during its pre-trial investigation.

A conviction on either of the two counts would have elevated Vice President Mike Pence, another Republican, into the presidency. Romney joined the rest of the Republican senators in voting to acquit on the obstruction charge. No Democrat voted to acquit.

Trump has consistently denied any wrongdoing.

The verdict cleared out a major hurdle for the president to fully plunge into his campaign for re-election in November.

Democrats were dejected but not surprised, after the intense 78-day House investigation that faced public doubts and high-pressure stonewalling from the White House.

Anticipating the likely party-line vote by the senators, Democratic House Speaker Nancy Pelosi repeatedly said that, whatever happened, Trump would join two previous presidents as being tarred with the "impeached" label, since the House of Representatives formally impeached Trump in December.

The vote closed a political chapter that many Democrats had been reluctant to enter.

But her concerns that it was a hefty political risk for Democrats less than two years before national elections melted after new allegations surfaced in August that Trump had pressured Ukraine for help for his 2020 campaign.

Though doubtful from the outset that they would win support from Senate Republicans, an investigation amassed with surprising speed strong evidence to support the allegations.

The evidence showed that from early in 2019, Trump's private lawyer Rudy Giuliani and a close political ally, Ambassador to the European Union Gordon Sondland, were scheming to pressure Kiev to help smear Democrats, including Trump's potential 2020 rival Joe Biden, by opening investigations into them.

Democratic Congressman Adam Schiff, who led the House investigation, said the fact that it came after Mueller's investigation showed that Trump's 2016 campaign had actively sought help from Russia forced Democrats to act.

"We must say enough – enough! He has betrayed our national security, and he will do so again," Schiff argued on the Senate floor this week.

"He has compromised our elections, and he will do so again," Schiff said.

Third US president to be impeached

Trump is the third US president to have been impeached. The two others, Bill Clinton in 1999 and Andrew Johnson in 1868, were left in power by the Senate.

In 1999, Democratic President Bill Clinton was acquitted on charges of lying under oath and obstruction of justice stemming from a sexual relationship with a White House intern.

In 1868, President Andrew Johnson was found not guilty of 11 charges, which partially revolved around a post-Civil War tussle over his removal of the secretary of war.

Richard Nixon, the only president to resign, did so in 1974 when many of his fellow Republicans abandoned him during a House impeachment probe related to a break-in at Democratic Party offices in Washington.

On Twitter after the vote, the president posted a video showing Trump campaign signs for future elections from 2024 onward ending with "Trump 4EVA". The US Constitution limits a president to two elected four-year terms in office.

Trump said he would deliver a public statement at noon EST/ 6pm Paris time (5pm GMT) on Thursday on his acquittal.

"President Trump has been totally vindicated and it's now time to get back to the business of the American people," Trump's campaign manager, Brad Parscale, said in a statement. 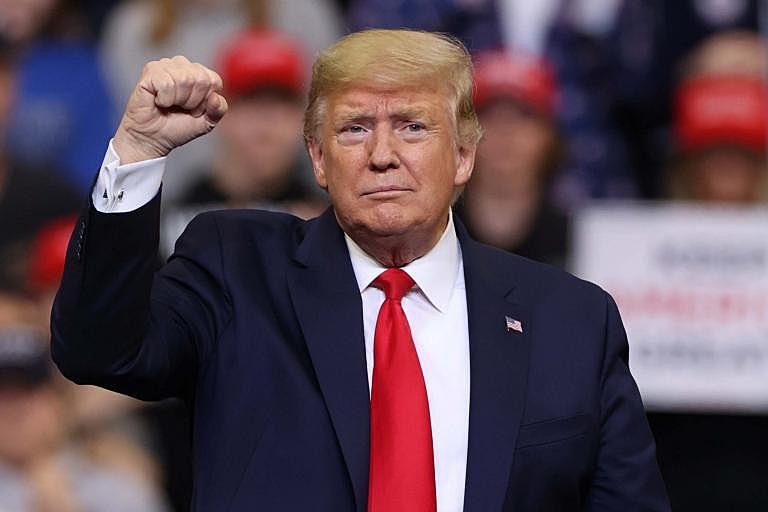 Trump’s acquittal ends, at least for now, an impeachment saga that began soon after his inauguration but wasn't officially launched…

ABC News
Senate acquits Trump in impeachment trial; Romney breaks with GOP to vote for conviction
WASHINGTON _ The Senate on Wednesday acquitted President Donald Trump of abusing the power of his office and obstructing Congress'…

Los Angeles Times
One subscription that gives you access to news from hundreds of sites
In political triumph, Trump acquitted in impeachment trial