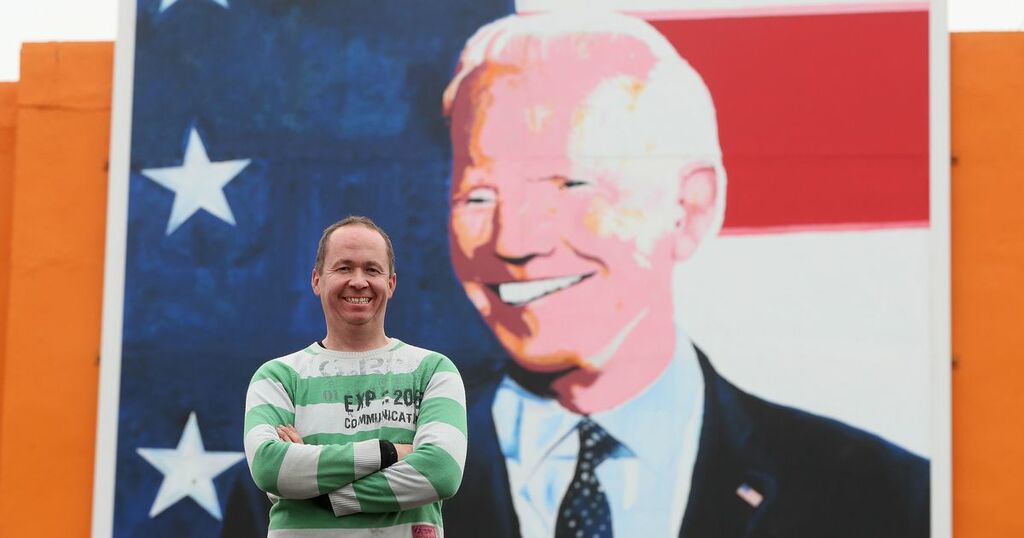 US President Joe Biden will be keeping up-to-date with the All-Ireland final and the destiny of the Sam Maguire Cup today – and he may even wear his Mayo jersey.

The 78-year-old’s younger brother Jimmy attended the 2017 final defeat by Dublin with cousins Laurita and Joe Blewitt and he will be keeping the commander-in-chief informed.

President Biden, whose ancestors hail from the Yew County, turned the first sod for the Mayo Hospice in 2017 when he was proudly presented with a county jersey.

Cousin Joe told the Irish Mirror: “He’s aware that the match is on. He’ll be wearing the Mayo jersey.

“His brother Jimmy follows the Gaelic so he’ll be letting him know what the story is. It’d be great if they can pull it off.” His cousin added a visit by the US President to Mayo next year if the county are All-Ireland champions would make it even more memorable and said: “There’d be two great men in Mayo then – Sam Maguire and Joe Biden.”

Earlier this year, President Biden gave an indication that he is fully aware of tribal county loyalties.

He said: “For Secretary of Labor, I nominated a good friend and a stand-up guy Marty Walsh of Boston.

“The son of Irish immigrants – the only downside is he’s not from Mayo, he’s from Galway.”

His presidential election victory was greeted with jubilant celebrations in Ballina last year where several of his cousins and distant relatives live.

His great-great-grandfather Edward Blewitt and wife Mary emigrated from nearby Knockmore to Scranton, Pennsylvania, more than 160 years ago.

The married father of two, from Ballina, predicted the Yew County will triumph on a 1-16 to 1-13 scoreline.

He said: “I hope the long wait is over. I can play Moonlight in Mayo and I hope to be playing that song a lot this weekend.”

Eamonn, who works with An Post and is nicknamed The Piping Postman, added: “I brought the All-Ireland Fleadh to Ballina in 1996 and I was on the RTE programme Up For The Match and it was announced on the Saturday evening.

“The presenter Liam O Murchu said that Mayo had already won one All-Ireland but sadly we didn’t manage to get the better of Meath the next day.”

Eamon, 67, landed the title of All-Ireland piper in 1986 and he was the winner of the world championships in uilleann piping in 2006.

The Tallaght resident added: “I’m a proud Mayo man overall and I’m a member of the Mayo Association in Dublin.”

Meanwhile, a Mayo priest yesterday rubbished the infamous curse and said that it only kicked off “when Mayo weren’t winning All-Irelands”.

Fr John Doherty, 87, has been a fervent Green and Red supporter since his first memories of listening to the team’s matches in the 1940s.

The Charlestown cleric has been at all of the team’s big games in Croke Park.

Fr Doherty, who was previously based in Foxford where the story about the curse originated, described it as “utter nonsense”.

“As a matter of fact there’s no great record of a funeral at that time at all.

“I was based in Foxford in the late 1970s for about five years and that alleged incident was never once mentioned.

“In other words that was a concoction as far as I’m concerned that came to light when Mayo weren’t winning All-Irelands.

The popular priest has a ticket for the big match and added: “It would be brilliant to see Mayo win again. I was at all of Mayo’s All-Irelands since 1989 and we were disappointed so often and it would mean a tremendous amount.

“You can sense that at the moment there is great expectation and the same time people are a bit wary because we have been a bit disappointed so many times in the past.

“I’ll be praying they’ll be able to give it their best, you don’t pray for a win.” Elsewhere, former Tyrone All-Star Plunkett Donaghy, who appeared in two All-Ireland finals for the Red Hand in 1986 against Kerry and 1995 against Dublin, believes the final will go down to the wire.

He said: “When you get to this stage it’s a 50-50 game. Mayo have probably had the upper hand over Tyrone and us and Kerry have been close, tight contests as well and we got through the semi-final.

“So hopefully we can do the same against Mayo.”

Schoolchildren formed guards of honour to wave off teachers yesterday – before they swap the playground for Croke Park.

A number of the Tyrone panel pay the bills by teaching and got a heroes’ send-off from pupils ahead of the big day.

Students and staff at St Patrick’s College in Dungannon lined the path outside the school to see off Galbally clubman Liam Rafferty.

The college said: “We are so proud to wish Mr Rafferty and the Tyrone team all the best as he leaves for Croke Park and the All-Ireland.”

Errigal Ciaran clubman Niall Kelly is a teacher in St Ciaran’s College, Ballygawley, and was also given massive applause as he left the school premises yesterday.

St Ciaran’s said: “Mr Kelly is nipping out early today, but we’ll forgive him as he has the very valid excuse of heading to Dublin ahead of representing Tyrone in tomorrow’s All-Ireland final.”