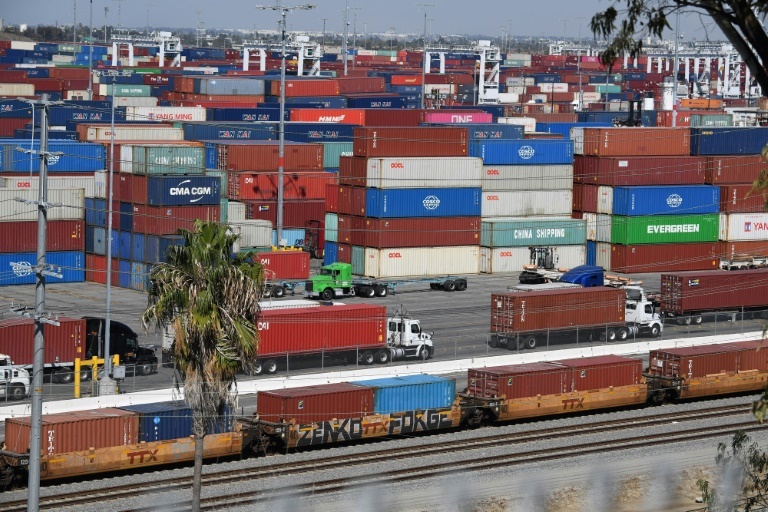 Los Angeles (AFP) - Christmas came early -- June, to be precise -- at the port of Los Angeles, as American importers raced to get ahead of a pandemic-sparked logjam that has snarled global shipping.

Still, dozens of ships carrying hundreds of thousands of containers remained at anchor outside the harbor, waiting for a berth on docks packed to capacity.Many will wait more than 10 days.

"(Americans are) not going to ball games, we're not going to the movies or the opera; we're buying products.Whether we're going to our big box retailers, or we're shopping online, those goods need to be replenished."

Economies largely shuttered for chunks of the last year by governments trying to tamp down the coronavirus are reopening, and demand is booming -- but supply is struggling to keep up.

Globalization has wrought attenuated supply chains that stretch from resource extraction in places such Australia, to production in Asian manufacturing hubs, to shoppers in the West.

Between every stage, goods are loaded into box containers and transported on ships, trains and trucks through ports and stations.

If any one of these steps breaks down, the whole chain can grind to a halt.

During the pandemic, almost every one of them did.

And even as things start to get back to normal in the United States, the effects are still being felt.

"Everything is back ordered, all the vessels are in the ocean," truck driver Tony Nguyen told AFP.

"I've been driving for the port for like almost 10 years, but this year it's terrible.I've never seen that before."

Aware of the bottlenecks, US importers began their Christmas preparations early, loading up on tinsel and toys while most Americans were readying for the summer.

"The American importer...pulled forward much of the holiday inventory, earlier than we've seen in past years," Seroka told CNN earlier this month.

"Importers began bringing in holiday season cargo in June, so two to two-and-a-half months ahead of schedule."

On Tuesday, the International Monetary Fund warned that supply chain disruptions are driving price increases, as it trimmed its growth outlook in an increasingly uneven global recovery.

In the United States, consumer prices were up more than 5 percent in September.

There are several factors behind the shortages of raw materials and finished goods now plaguing retailers.

These include factory outages in countries that have imposed lockdowns due to Covid-19, unexpected demand spikes for some goods as behavior changed during the pandemic, and a labor crunch.

But the backlog at US ports has been a major contributing factor.

And nowhere is that more evident than the neighboring ports of Los Angeles and Long Beach -- the main gateways for Asia, where thousands of multi-colored shipping containers are stacked, processed and shuffled around every day.

The Los Angeles port alone has handled more than 7.3 million TEUs so far this year.A TEU is the industry's standard measurement for cargo, and stands for Twenty-foot Equivalent Unit.

Each year, more than a quarter of a trillion dollars' worth of goods pass through the port -- a big chunk of the entire US economy.

"What happens in Los Angeles and other West Coast ports reverberates all the way through the country," said Agriculture Transportation Coalition executive director Peter Friedmann.

The World Bank estimates 8.5 percent of global container shipping is stalled in or around ports.

That congestion is renewing talk of onshoring -- bringing production back home.

"Never again should our country and our economy be unable to make critical products we need because we don't have access to materials we need," US President Joe Biden said this week.

"Never again shall we have to rely too heavily on one company or one country."