U.S. troops could see their access to abortion severely curtailed if the Supreme Court overturns its landmark ruling on reproductive rights, potentially hurting military recruitment and the retention of women.

As employees of the federal government, doctors on military bases are already banned from performing abortions so female troops — and the female spouses of troops — must seek out the procedure on their own. That would become much more difficult if the Supreme Court overturns the precedent set in its Roe v. Wade ruling almost five decades ago, as a leaked draft ruling indicates it’s likely to do.

At least 26 states probably would place restrictions on abortion laws, including Texas, Florida and other southern states that have many of the nation’s military bases, according to Sean Timmons, a managing partner at Tulley Rinckey who specializes in military law.

The potential impact on recruitment and retention would come as the military is already struggling to find qualified troops. Women make up almost 20% of the 1.3 million-member active-duty force.

“It places an undue burden on women serving in the military because they are going to have to go through extraordinary lengths to seek fair access to reproductive health care, which they wouldn’t be facing if they hadn’t joined the military, for example, and then been stationed in a state that has very restrictive access,” said Rachel VanLandingham, an associate professor at Southwestern Law School in Los Angeles who specializes in national security law.

But Sen. Jim Inhofe of Oklahoma, the top Republican on the Senate Armed Services Committee, disputed the idea that new limits on abortions could affect women’s willingness to serve.

“I have seen nothing from the Department of Defense that has led me to believe that access to abortion is a factor in recruiting and retention one way or another,” Inhofe said in a statement.

Defense Department spokesman John Kirby declined to directly address the abortion issue when questioned this week. But he said “the health and well-being of our men and women are paramount concerns of department leadership,” and “we are serious about making sure they have the information, the tools that they need to make the most informed decisions for their own personal health and well-being.”

“Of course we cannot be an effective military without the brave women who serve inside the military, and who serve in the civilian ranks,” he told reporters.

Military medical facilities aren’t allowed to perform abortions — and the cost of the procedure in private facilities isn’t covered by the military’s Tricare health insurance — because of the Hyde Amendment of 1976, which prohibits the use of federal dollars for abortions unless the life of the mother is at risk.

Women can ask to be discharged from the military if they are pregnant, according to Timmons.

To get an abortion out of state, women in the military would have to ask for approved leave from their commanders, and probably have to disclose the reason. “It could well lead to additional hostile work environment, harassment, obnoxious behavior from colleagues if they know why the absence is necessitated,” Timmons said.

Asking for leave also can put women at a disadvantage on performance evaluations — especially if they are based overseas in places where abortion is banned — because they’d be asking for special treatment to take the leave, said VanLandingham, a retired Air Force lieutenant colonel.

“It adds to the burden the women already shoulder by being in the minority in the military within a still very much male culture,” she said.

The vast majority — 95% — of all women serving in the military are of reproductive age, according to Defense Department estimates. The Pentagon provides health care to more than 1.5 million women of reproductive age, including servicewomen on active duty, in the guard and reserves, as well their dependents, according a statement by Rep. Jackie Speier, D-Calif., and Sen. Jeanne Shaheen, D-N.H., who have championed women’s health care in the military.

Studies have also shown that women in the military have a 50% higher rate of unplanned pregnancy than the general population, according to the lawmakers.

Despite incremental increases in the population of military women over the past 15 years, female service members are 28% more likely to separate from service than their male active-duty counterparts, according to a Government Accountability Office report in 2020. Family planning, sexual assault, and dependent care were some of the issues listed as influencing women’s decisions to leave the military, according to the GAO.

Because Congress isn’t likely to scuttle the Hyde Amendment any time soon, VanLandingham, the law professor, urged the Pentagon and the Biden administration to change internal policies and attitudes to let troops know “that we will take care of you, we will help seek access to reproductive health care, and to overcome these additional burdens.” 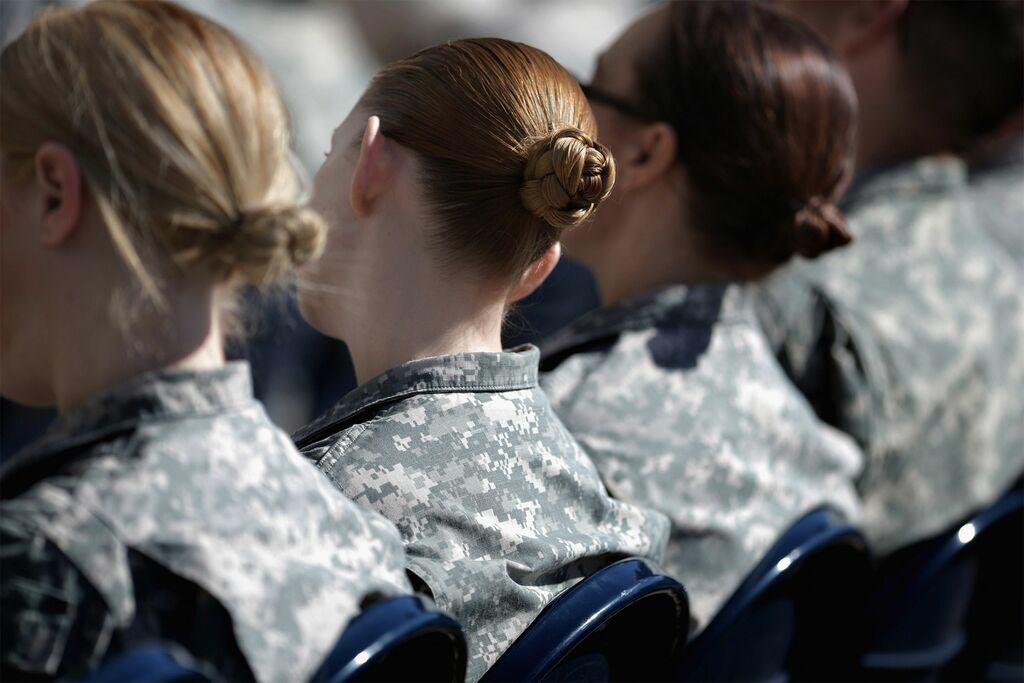 U.S. Military Risks a Decline in Female Troops Under Roe Rollback
U.S. troops could see their access to abortion severely curtailed if the Supreme Court overturns its landmark ruling on reproductive…