US jobless claims dip below 300,000 in pandemic breakthrough 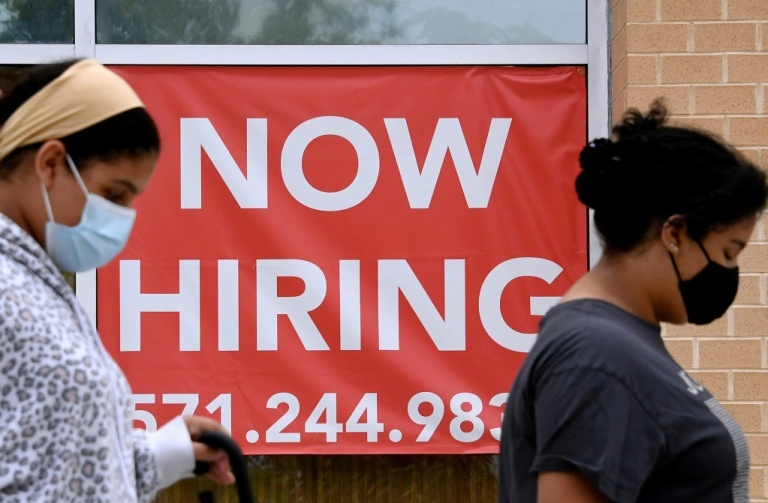 Washington (AFP) - New applications for US unemployment benefits have dipped below 300,000 for the first time since the pandemic began, a milestone in the labor market's recovery from the devastation wrought by the virus last year.

The weekly applications for jobless aid became one of the most visible signs of Covid-19's economic ravaging as they surged into the millions in March 2020.

They've declined throughout this year as vaccines allowed employers to rebuild their staff, and the Labor Department reported Thursday that they'd dropped to 293,000 in the week ended October 9, the lowest level since the crisis started.

"Initial claims are now within striking distance of their pre-pandemic level, which could be reached later this year as the Delta wave recedes and hiring improves," Daniel Zhao of job search site Glassdoor said on Twitter.

These include supply chains snarls that have pushed prices up, as well as the Delta variant of the virus, which has fueled a spike in cases in recent weeks that now appears to be ebbing.

Nonetheless, Ian Shepherdson of Pantheon Macroeconomics said the data predict that better days are ahead.

"Claims won't keep falling at the pace seen over the past couple weeks, but the trend clearly is downwards and as the economy re-emerges from the Delta wave, layoffs will decline further," he wrote in an analysis.

Claims remained elevated for much of 2020 before vaccines brought a decisive decline this year, though the fast-spreading Delta variant's wave of infections arrested that progress in recent weeks.

Last week's claims were 36,000 lower than the week prior, while the report said another 21,624 claims, not seasonally adjusted, were filed under the Pandemic Unemployment Assistance program, which was created to aid freelance workers not normally eligible for aid but expired weeks ago.

All told, more than 3.6 million people were receiving jobless benefits under all programs as of the week ended September 25, the latest for which data was available.

The report showed another record low was reached in insured unemployment, the share of workers actually receiving benefits.

As of October 2, 2,593,000 people were receiving regular benefits, a drop of 134,000 from the prior week and the lowest level since the pandemic began.

The insured unemployment rate as of that week was 1.9 percent, slightly lower than the week before, the report said.

"The claims data are consistent with an improving employment situation," Nancy Vanden Houten of Oxford Economics said."We expect further progress in the months ahead as the health situation is improving following the surge in cases over the summer from the Delta variant."

In a sign of the economy's ongoing challenges, separate Labor Department data released Thursday showed wholesale prices spiking 8.6 percent in the 12 months ended in September, their biggest increase in a decade and a sign of the continued potency of the inflation wave.