US honors 9/11 dead on 20th anniversary of attacks 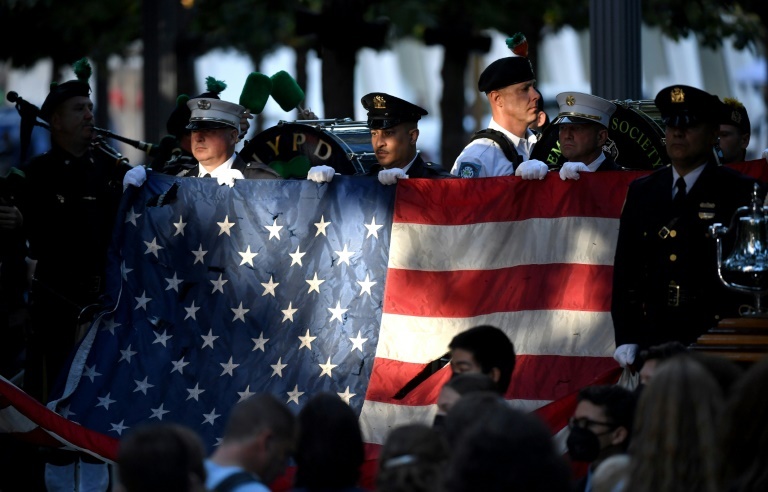 New York (AFP) - America marked the 20th anniversary of 9/11 Saturday with solemn ceremonies given added poignancy by the recent chaotic withdrawal of US troops from Afghanistan and return to power of the Taliban.

At the 9/11 memorial in New York, relatives wiped away tears, their voices breaking as they read out the names of the almost 3,000 people killed in the Al-Qaeda attacks.

"We love you and we miss you," many of them said as somber violin music played at the official ceremony, attended by dignitaries including President Joe Biden and former presidents Barack Obama and Bill Clinton.

At the Ground Zero site where 2,753 people died -- some of whom jumped to their deaths from the collapsing towers -- the service started shortly after 8:30 am (1230 GMT) under tight security, with Lower Manhattan effectively locked down.

The first of six moments of silence were marked at 8:46 am, with a bell ringing to symbolize the time the first hijacked plane crashed into the North Tower of the World Trade Center.

At 9:03 am, attendees stood still again to mark the moment the South Tower was struck.At 9:37 am, it was the Pentagon, where the hijacked airliner killed 184 people in the plane and on the ground.

At 9:59, the moment the South Tower fell.At 10:03 am, they remembered the fourth plane to crash in a field in Shanksville, Pennsylvania, after passengers fought the hijackers. At 10:28 am, the North Tower falling.

Mourners clutched photos of their loved ones, their pain still raw despite a whole generation having grown up since the morning of September 11.

"As we carry these 20 years forward, I find continuing appreciation for all of those who rose to be more than ordinary people," said Mike Low, whose daughter was a flight attendant on the first plane.

Bruce Springsteen sang his song "I'll See You in My Dreams," and after nightfall twin light beams will be projected into the New York sky.

Smaller ceremonies took place across the country, including outside fire stations throughout New York in remembrance of the 343 firefighters who lost their lives to save others, while a brief moment of contemplation took place in Times Square.

Heart-wrenching commemorations also took place at the Pentagon and Shanksville.

In the last 20 years, Al-Qaeda founder Osama bin Laden has been hunted down and killed and towering new sky scraper has risen over Manhattan, replacing the Twin Towers, dubbed the "Freedom Tower."

And even the full story of how the attack came to happen remains secret.Only last week did Biden order the release of classified documents from the FBI investigation over the next six months.

The memorials come with US troops finally gone from Afghanistan, but national discord over the exit has overshadowed what was supposed to be a pivotal day in Biden's nearly eight-month-old presidency.

Less than two weeks ago, the last US soldiers flew from Kabul airport, ending the so-called "forever war."

But the Taliban who once sheltered bin Laden are back ruling Afghanistan, the mighty US military humiliated.

In a video posted on the eve of the anniversary, Biden urged Americans to show unity, "our greatest strength."

"To me, that's the central lesson of September 11th.It's that at our most vulnerable, in the push and pull of all that makes us human, in the battle for the soul of America, unity is our greatest strength," Biden said in a six-minute message from the White House.

But former president Donald Trump shattered that unity, releasing a video message slamming the "inept administration" of Biden for its "incompetence" over the Afghan withdrawal.

World leaders struck a more cordial tone, sending messages of solidarity to the United States, and saying that the attackers had failed to destroy Western values.

Britain's Queen Elizabeth II said the victims and survivors were in her prayers as she paid tribute to the "resilience and determination of the  communities who joined together to rebuild."