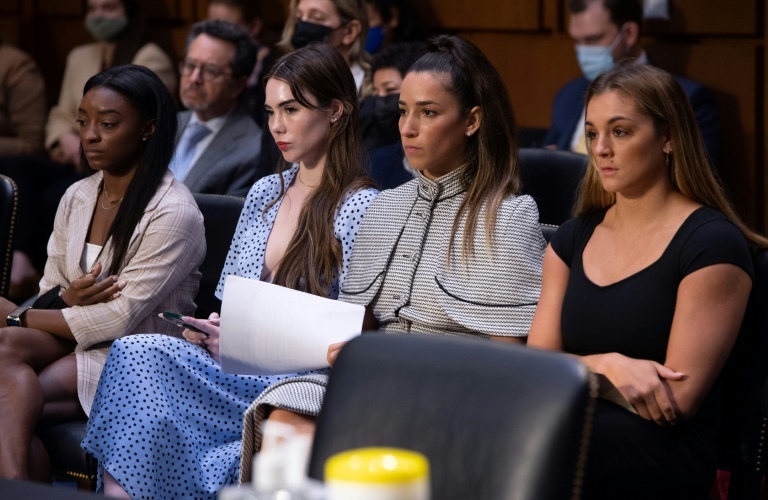 Washington (AFP) - Olympic champion Simone Biles and other top American gymnasts excoriated US sports officials and the FBI in powerful Senate testimony on Wednesday for failing to act promptly on complaints about Larry Nassar, the former team doctor convicted of serial sexual abuse.

"We have been failed and we deserve answers," said the 24-year-old Biles, a seven-time Olympic medalist and the most decorated gymnast in world championships history.

"To be clear, I blame Larry Nassar but I also blame an entire system that enabled and perpetrated his abuse," she told an emotional hearing of the Senate Judiciary Committee.

Nassar, 58, was sentenced to life in prison in 2018 after pleading guilty to sexually assaulting women and girls while working as a team doctor at USA Gymnastics and Michigan State University (MSU).USA Gymnastics reported Nassar to the FBI in July 2015, but he continued to work at MSU and sexually abused at least 70 more women until a newspaper exposed him in September 2016

Biles and the three other gymnasts -- McKayla Maroney, Aly Raisman and Maggie Nichols -- testified that they were let down by the FBI, the leadership of USA Gymnastics and the US Olympic and Paralympic Committee (USOPC).

"We suffered and continue to suffer because no one at the FBI, USAG or USOPC did what was necessary to protect us," said Biles, who had to halt her testimony at several points to compose herself and wipe away tears.

Maroney, who won a team gold medal at the 2012 London Olympics, said she reported the abuse by Nassar in a three-hour telephone interview with a Federal Bureau of Investigation agent in 2015 but it was "minimized and disregarded."

"Not only did the FBI not report my abuse," Maroney said, "but when they eventually documented my report 17 months later, they made entirely false claims about what I said."

"They allowed a child molester to go free for more than a year," the 25-year-old Maroney said."They had legal, legitimate evidence of child abuse and did nothing."

'On a silver platter'

Hundreds of women -- including Olympians and collegiate athletes -- have accused Nassar of sexually abusing them over the course of his more than two-decade career in sports medicine.

The Justice Department's Inspector General published a scathing report in July about the mishandling of the accusations against Nassar by the FBI's field office in Indianapolis, where USA Gymnastics has its headquarters.FBI agents failed to take the allegations seriously and investigate them right away, the report said.

Biles, Maroney, Raisman and Nichols were invited to testify before the Senate committee under oath about the "FBI's dereliction of duty in the Nassar case."

Raisman, former captain of the Olympic gold medal-winning 2012 and 2016 US teams, said stopping Nassar's abuse should have been a priority for the FBI but it took over 14 months for the bureau to contact her.

Raisman said the delay was "like serving innocent children up to a pedophile on a silver platter."

Nichols, who won a gold medal at the 2015 World Artistic Gymnastics Championships, said she reported Nassar's abuse to USA Gymnastics leadership in 2015.

"I am haunted by the fact that even after I reported my abuse so many women and girls had to suffer at the hands of Larry Nassar," she said.

"USA Gymnastics and the United States Olympic and Paralympic Committee have all betrayed me and those who were abused by Larry Nassar," the 24-year-old Nichols said.

FBI Director Christopher Wray also testified before the Senate panel but in a separate session.

Wray apologized to the gymnasts and others abused by Nassar for the FBI's mishandling of the investigation.

"In no planet is what happened in this case acceptable," he said.

"I'm sorry so many people let you down over and over again," Wray said.

"And I am especially sorry that there were people at the FBI who had their own chance to stop this monster back in 2015 and failed.That is inexcusable."

Wray said the senior agent in Indianapolis who failed to properly investigate Nassar had retired while another agent had been fired.